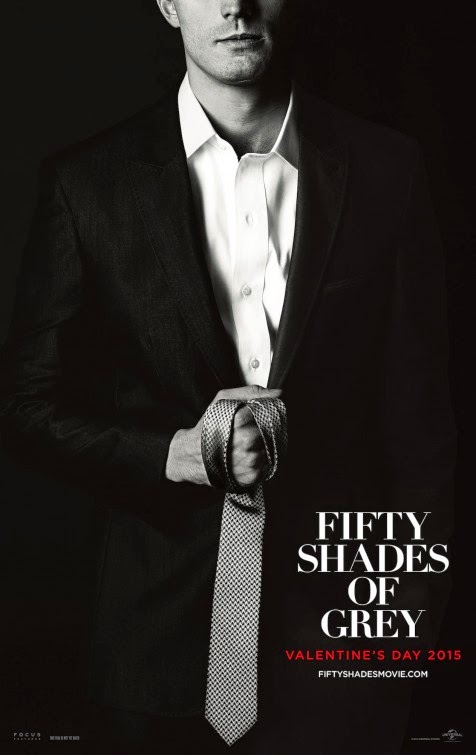 "I don't make love. I fuck…hard," promises steely, alluring 27-year-old billionaire Christian Grey (Jamie Dornan) to bookish, virginal Anastasia Steele (Dakota Johnson). That line of dialogue in "Fifty Shades of Grey" could actually encapsulate what is fundamentally problematic with E.L. James' 2011 erotic bodice-ripper. Taking the fetishistic subculture out of it, the unhealthy relationship between these two consenting adults eventually comes off more skeevy and disturbing than romantic or dangerously sexy in what is the strangest Valentine's Day-released fantasy ever. Now, of course, it would be great if the film were good. It would even be better if it were so-bad-it's-great, but English director Sam Taylor-Johnson (2010's "Nowhere Boy") brings more canniness than expected to the production and screenwriter Kelly Marcel (who's far, far away from 2013's "Saving Mr. Banks") has gone to great pains to adapt the source material as best as anyone probably could. As the hotly anticipated adaptation of the first novel in a trilogy that began as kinky "Twilight" fan fiction and then sold over 100 million copies nationwide, "Fifty Shades of Grey" is glossy and watchable for curiosity seekers, but it mostly leaves one cold and not in need of a cold shower.

For the uninitiated, it's the oldest story in the book: boy meets girl, boy seduces girl, boy introduces girl to his world of BDSM (Bondage & Discipline, Dominance & Submission, Sadism & Masochism). Demure, lip-biting English Lit major Anastasia "Just Ana" Steele does her journalism-major roommate a solid when she comes down with the flu. She fills in to interview one Christian Grey, an elusive business CEO in downtown Seattle and benefactor of Washington State University. Immediately, they are intoxicated with one another, but after a cut-short coffee date, Christian tells her to steer clear of him. Ana can't let go, though, and he's used to getting his way. Christian doesn't do romance, you see, so dinner and a movie aren't really his thing, but with Ana, he's willing to bend the rules a bit. Still, being a control freak, he gives her time to read through a non-disclosure agreement before finally introducing Ana to his torture-pleasure playroom, "The Red Room of Pain," full of floggers, peacock feather-ticklers, and a closet of perfectly folded ties. Will Ana sign the contract? Or…will she not? That question will be left to the toe-curling viewer.

In a time where there are so few films made by women and for women, "Fifty Shades of Grey" does have more of a feminist bent than the "Twilight" films. It should be given that much. As Bella Swan changed just to be with her sparkling vampire prince, the inexperienced Ana, who doesn't know what a "butt plug" entails, doesn't completely let go of her agency and isn't about to fully give her new partner the upper hand. She loves him for whatever reason, and not just because he buys her a new MacBook Pro laptop and a car. Ana is attracted to Christian and curious enough to sign his contract to become his "submissive" and he her "dominant." "It's the way I am," Christian flatly states. He has fixed ideas about what pleasures him and hopes she will grow into liking his lifestyle, and later on, Ana asks him outside of a dinner party at his parents' home, "Why are you trying to change me?" Maybe she's the one who's actually changing him. That kind of power dynamic is sometimes more interesting and heated than the sex. For instance, Ana takes charge as Christian's bottom in the film's sharpest scene, where she insists a negotiation over the fine print of Christian's contract and approaches it like a business meeting ("Genital clamps? Absolutely not.")

Though "Anastasia Steele" is only a name that should exist in fairy tales without bondage, Dakota Johnson (2014's "Date and Switch") makes for an appealing, sweet and relatable Ana. Charisma, a sense of humor, warmth, and modesty, the actress has it all, and she seems to understand the material she's working with is ridiculous. For a mousy young woman, she still has a spine, and that's refreshing to see. As for Jamie Dornan, an Irish Calvin Klein actor who surely is a magnetic, handsome specimen and distractingly looks like Anton Yelchin, he has Christian Grey's hard exterior down by glowering and throwing off fierce looks. The problem is Dornan's, ahem, one-shade performance. Johnson is able to operate on a playful level with the dialogue, while the occasional groaner gets away from Dornan. He can't quite sell lines, like "Laters, baby" or "I want to fuck you into next week," and he comes off more humorless than "intimidating," but the blame shouldn't be placed so much on the actor as on the writing of this cipher. Even after a superficially mentioned revelation concerning Christian's childhood abuse that seems to be an excuse for his "very singular" tastes and a line self-proclaiming himself to be "fifty shades of fucked-up," it's hard to get a reading on him. What's more, Dornan seems so stiff and emotionally closed-off even in the bedroom cracking the whip, which should induce some ounce of pleasure, right? Together, Johnson and Dornan seem fully engaged in trying to kindle a fire, but despite their fleshy scenes together, their chemistry is nothing combustible. The rest of the cast is just background to actualize Ana and Christian's friends and family, but only Eloise Mumford actually makes much of an impression as Ana's vivacious roommate Katherine. Jennifer Ehle is barely there as Ana's four-times-married mother living in Georgia, and Marcia Gay Harden is allowed no time to break free of her one-note role as Christian's doctor mother; at least she's rich but not vindictive.

"Fifty Shades of Grey" didn't have to be campy or even as necessarily graphic as Lars von Trier's "Nymphomaniac" twofer, but it needed more sexual tension. Isn't that the selling point after all? While Dakota Johnson does perform the full monty and Jamie Dornan bares his glutes a few times when he's not asked to keep on his ripped jeans, the sex scenes are sufficiently steamy and more intense than any mainstream release but almost too palatable and truncated to titillate. They're neither a turn-on nor a turn-off, and perhaps they could have been more effective by going for it in either category. Unlike 2002's James Spader-Maggie Gyllenhaal S&M romantic-comedy "Secretary" or even 1996's David Cronenberg-directed "Crash" about auto-erotica, this film doesn't delve deep enough into the psychology of Christian's proclivity for BDSM practices. Instead, the film is supposed to be a kinky aphrodisiac, but how can it be when it's too staid to take the plunge? It's also amusing how many times Ana is shot resting a pencil on her lip or a hardware-store price gun under her chin, as if we needed to be teased with more phallic imagery.

By the time Ana still hasn't signed the contract, the thin narrative hasn't gone much of anywhere, except for a few trips to Christian's playroom. Where the filmmakers choose to end this stand-alone film cleverly parallels the couple's first goodbye as the elevator doors close, but after 108 minutes, the last two minutes should build to something more satisfying than a cliffhanger. For now, it's hard to detect what was so enticing about E.L. James' trashy "mommy porn" to begin with. What director Sam Taylor-Johnson does get right is the artfully grey look of Seattle and Christian's sleek, sterile luxury penthouse and office, as well as sultry, atmospheric music choices such as Annie Lennox's cover of "I Put a Spell On You," Ellie Goulding's "Love Me Like You Do," and Beyoncé's "Haunted" and downtempo remix of "Crazy In Love." And, once again tooting the Dakota Johnson horn, she deserves to be a star. As with any adaptation of a book with a pre-sold audience, rabid fans are still going to stampede to theaters in droves. Will they get all hot and bothered? That answer is subjective. Is the film everything the hype has cracked it up to be? Not a chance. Without pushing the envelope as far as it should have to make a stronger impact, "Fifty Shades of Grey" just doesn't rise to the occasion. If you just giggled, you deserve a spanking.