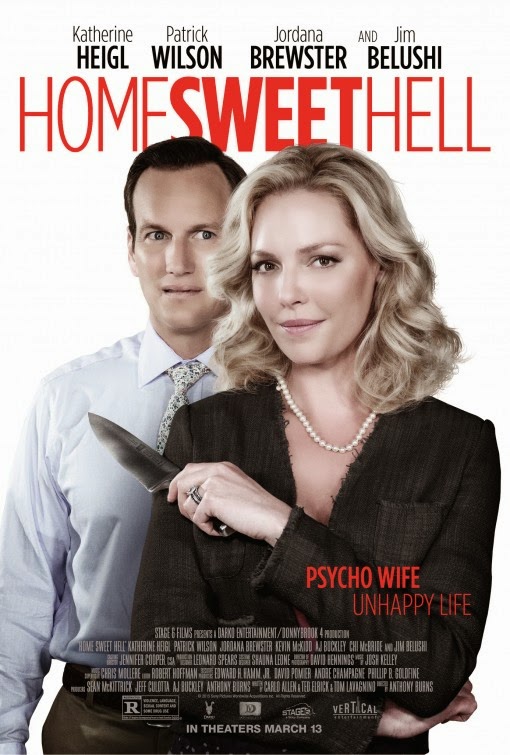 Judging by its title, "Home Sweet Hell" should be a wickedly funny black comedy that satirically flips suburban home life on its head. And, who hasn't wanted to see the unfairly maligned Katherine Heigl play a Stepfordized, tight-assed, shrewish suburban housewife who has a psychotic break? It's as if her type-A persona from her cookie-cutter, by-the-book romantic comedies (2008's "27 Dresses," 2009's "The Ugly Truth" and 2010's "Life as We Know It") has finally jumped off the edge, and that's thrilling to see, even if it's in a tonally unstable, disturbing comedy such as this. Save for Heigl's killer turn, "Home Sweet Hell" is more at home as a whacked-out curiosity than a slam dunk. It ultimately leaves a sad, bitter aftertaste in one's mouth.

Running his father-in-law's business, emasculated, sex-starved furniture store owner and family man Don Champagne (Patrick Wilson) gets in way over his head. His wife, goal-setting, obsessive-compulsive, appearance-keeping Mona (Katherine Heigl), has their entire life planned out: she schedules their sex life, has her young kids taking French lessons, and is always drilling little do-better nuggets into their heads. When Don hires the attractive Dusty (Jordana Brewster) as his new salesgirl, one sexual encounter leads to an affair, which leads to her pregnancy. He tries paying her off with $13,000, but in a panic, Don comes clean with Mona, who calmly says that he needs to kill Dusty, who's in cahoots with her lowlife criminal boyfriend (A.J. Buckley). Making sure everything goes her way and using her knowledge from homicide detective TV series "The First 48," Mona is not about to let some trampy extortionist ruin her family's legacy.

Directed by Anthony Burns (2010's "Skateland") and written by Carlo Allen, Ted Elrick and Tom Lavagnino, "Home Sweet Hell" seems to hold its characters in contempt most of the time. Don comes off as a ninny, while Dusty is a scheming, homewrecking blow-up sex doll and Mona is a shrill murderess. Even Les (James Belushi), Don's oafish colleague, eggs on his boss to hire Dusty for eye-candy away from his long-suffering, Crohn's disease-afflicted wife. Breaking her slump of playing a woman who needs a husband (well, sort of), Katherine Heigl commits and sinks her teeth into the over-the-top role of Mona with enough comic flair. Beyond dispute, the actress has always seemed to have a bite to her that has never really translated to her on-screen characters, seeming too savvy and glamorous to play a single woman in a pickle of landing a man. Her reputation for being demanding on-set seems true, so here, this type of role suits her more and Heigl really sells it with convincing depravity. Otherwise, the recently ubiquitous Patrick Wilson has trouble locating a likable bone in the clueless, dweebish Don Champagne, who at one point foolishly gets high on crystal meth. The actor is clearly playing way beneath his intelligence and his goofy, strained efforts show, and yet, by the end, he's supposed to be holding down the fort of the film. Also, it seems worth mentioning that this is the second movie this year where Mr. Wilson has co-starred in a dark comedy about the disposal of a dead woman ("Let's Kill Ward's Wife" was the first).

"Home Sweet Hell" could have really shined with a sharper script, but it only takes off once Mona takes blood-soaked matters into her own hands. In the third act, where Don confronts his wife and asks if her parents ever did anything to make her the way she is, Mona sheds real human emotion, even though the character has been an overbearing cartoon up until then. This late scene seems to bleed some sort of honesty and empathy for Mona, but then the last scene has the phony nerve to be reprehensible and too aggressively ugly for its own good. Even a plot thread is wrapped up as an afterthought through audio once the credits are already rolling. Before that point, where no one is worth rooting for, the film is occasionally brazen and decidedly mean-spirited, but too bad Mona didn't kill off every other character because she runs away with the movie.