Assembling Some More: "Avengers: Age of Ultron" fun but too much 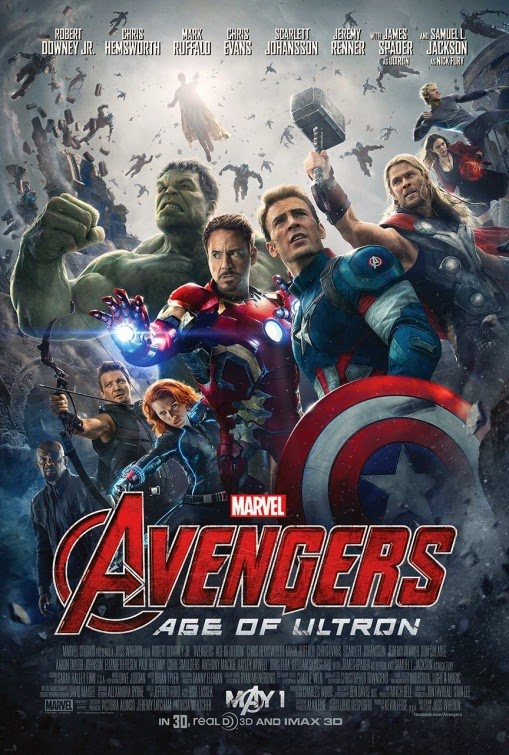 Everything was building up to 2012's "Marvel's The Avengers," where maverick writer-director Joss Whedon did the impossible by mashing up and assembling half a dozen superheroes into one movie and turned in a cohesive, breezily paced, entertaining 142-minute, $220-million-budgeted tentpole. So, as superhero movies have become placeholders and seed-planters for more to come, how can the sequel, "Avengers: Age of Ultron," meet all of the built-in hype and not underwhelm? It goes without saying that, sight unseen, fanboys are going to enter this behemoth already thinking it's the best movie ever made, but those are strong words. "Avengers: Age of Ultron" inevitably loses a fraction of the surprise of its predecessor and fatigues itself with too-muchness, but admittedly, it's still a fun, lively buffet of a man-made blockbuster with plenty to nibble on and more than enough fanfare. For an "Avengers" movie, that's still pretty good, even if one finds him or herself wanting to like it more than he or she actually does.

In Sokovia, the Avengers—Iron Man/Tony Stark (Robert Downey Jr.), Captain America (Chris Evans), Thor (Chris Hemsworth), Hawkeye (Jeremy Renner), Black Widow (Scarlett Johansson), and Hulk (Mark Ruffalo)—storm a Hydra outpost to retrieve Loki's scepter from Agent Baron Strucker (Thomas Krestchmann). They encounter a pair of Strucker's experiments in the form of the "enhanced" Maximoff twins, the lightning-fast Pietro/Quicksilver (Aaron Taylor-Johnson) and the telekinetic Wanda/Scarlet Witch (Elizabeth Olsen), who uses her mind-control powers to give Tony Stark a premonition of what's to come for the rest of his team. When Stark uses all of the scepter's energy to create an army of Iron Men to protect the earth, the plan backfires, giving birth to the indomitable artificial intelligence, Ultron (voiced by James Spader), who vows to destroy the planet and make the Avengers extinct. A lot of stuff ensues.

Dumping the viewer right into a context-free battle, which still comes away being the most immersive and thrilling of all the big action set-pieces, "Avengers: Age of Ultron" has gone the bigger-stronger route, but it's not necessarily faster or substantially better. Where Joss Whedon perfectly juggled the character interactions of the Avengers' team-building and familial-unit needling with the action set-pieces the first time out, he brings back the same amount of cheeky, quotable ribbing but doesn't attain the same sort of excitement for every physical battle, leaving room for more lulls. Given the ending credits' seemingly endless list of visual effects artists, digital compositors, and every other special-effects job title one has never heard of, it seems like taking for granted the care and time every person on the crew has put into creating every frame. And yet, save for Ultron's crashing of the after-party inside the Avengers' base and the final showdown, the majority of the action set-pieces are unmemorable and undermine the film's soul. Akin to 2014's "Guardians of the Galaxy," "Avengers: Age of Ultron" excels much more in the spirited humor of the smaller character moments. Granted, there are a lot of moving parts that don't get their complete fill in such an episodic, not to mention convoluted, plot, but it's in the camaraderie between the Avengers that pops more than any pyrotechnics.

The likable core cast returns as if no time has passed, each one of them getting their turn to shine. Robert Downey Jr. seems to always be in top form, his smarmy likability always feeling fresh and so right as Tony Stark. Chris Evans is more his old noble self than the one found in "Captain America: The Winter Soldier," but he has some amusing banter with Tony Stark in regards to profanity and he looks great in tight-fitting tees. Chris Hemsworth might have less to work with emotionally than he did last time, considering he and his team were up against his brother, but he does lunkheaded charm with the best of them, particularly a running joke involving all of his male mates taking a crack at lifting his hammer, a 'la "The Sword in the Stone." Scarlett Johansson once again owns the part of Natasha Romanoff/Black Widow, who doesn't fly or have any special powers, and gets to further her backstory as an assassin, but she gets stuck with an out-of-the-blue romance with Mark Ruffalo's Bruce Banner, made more forced and uninvolving by the fact that she had better chemistry with Jeremy Renner in "The Avengers" and Chris Evans in the "Captain America" sequel. The MVP of the first film, Ruffalo still quietly downplays his torment and fallibility as Dr. Banner, and the CG'd hulk also might be the most photorealistic it's ever looked, down to the tiniest of knuckle hairs on his big green hands. Stark's lullaby alternative for the Hulk is also a crowd-pleasing hit that it rivals some the green man's smashing in "The Avengers." As Clint Barton/Hawkeye sees an uptick in material that humanizes the arrow-wielder who always stood as a sixth wheel to his flashier cohorts, Jeremy Renner becomes a magnetic equal, with Linda Cardellini a welcome face as his wife Laura. Still on the sidelines, Cobie Smulders, as Agent Maria Hill, gets a little more personality aside from sporting more tight work skirts and dumping exposition, too, and Don Cheadle as James Rhodes/"Iron Patriot" has a terrific payoff with a joke about telling a story at parties.

Important enough to earn his own name in the title, the central foe doesn't match the interest or personality of Tom Hiddleston's Loki, but James Spader purrs his way through his voice performance as A.I. nemesis Ultron with just enough hissable menace and sadistic humor. The other new additions, Scarlet Witch and Quicksilver, are disappointingly underutilized in the already-crowded ensemble. Elizabeth Olsen and Aaron Taylor-Johnson do exactly what is asked of them, and their cartoonish accents luckily don't take the film into spoof territory, but Olsen doesn't get to make much of an impression until her emotionally felt delivery late in the film and Taylor-Johnson doesn't have much on Evan Peters' version in "X-Men: Days of Future Past." There's just not enough time to explore their wounded pasts, either, but SHIELD's Agent Maria Hill (Cobie Smulders) sums them up best: "He's fast, and she's weird." Otherwise, Paul Bettany, taking a break from voicing Stark's J.A.R.V.I.S. to play Vision, gets a cool introduction, satisfying comic-book insiders and intriguing those who are less in the know about where this character will go in the next movies.

Marvel Universe box-checking for contractual obligations and fan service or not, "Avengers: Age of Ultron" is ultimately too much of a good thing, proving "more" is just less. With even more characters on display this time, there isn't nearly enough character growth to cover in the span of almost two and a half hours. And, perhaps the excision of a few kablooey sequences could have strengthened the picture without losing accessibility for its cult of fist-bumping fanboys. The spectacle is diverting on a functional, ephemeral level, but the sense of danger is more limited. In a key scene, when Scarlet Witch sends several of the Avengers into their pasts or versions of their fateful futures, their respective visions are effectively nightmarish but cut too short to register much impact or add more dark-toned substance. While several missed opportunities come to mind and some of the incidents in the stop-and-start narrative—the trapping and easy rescue of one of the Avengers seems like a waste of time—just bloat the pacing, the finished product is still an entertaining time once it takes off. "Avengers: Age of Ultron" aims to please, and in spite of everything, it does. It's a lot of movie, and while it decidedly feels less special and more overstuffed and unwieldy in its storytelling than the first time we saw all of these characters share the screen together, there is still plenty that Whedon does right to deliver what fans want to see in an "Avengers" movie. As the post-credits confirm, the Avengers will surely return—"Avengers: Infinity War Part 1" and "Avengers: Infinity War Part 2" have already been announced for 2018 and 2019, respectively—and, hopefully, by that time, it will be more than enough time for the Russo Brothers to mirror the marvelous balance of witty barbs and spectacular, high-stakes action of "The Avengers." For now, their Phase 2 is just good enough.