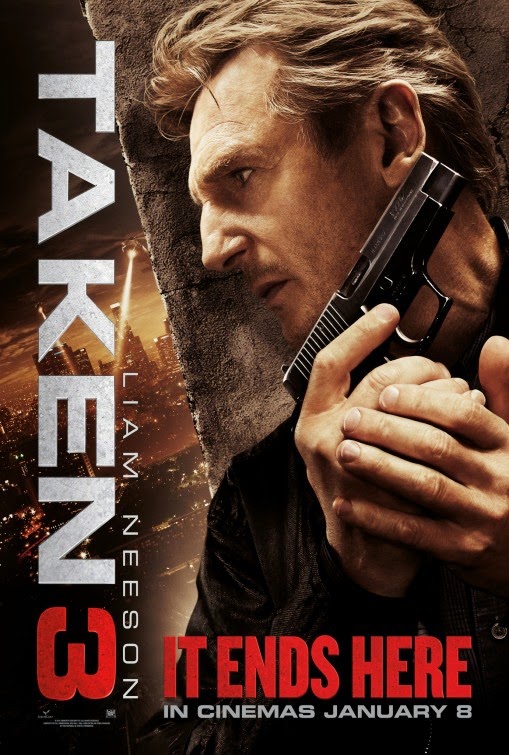 The door is always left open for a sequel, but that doesn't necessarily mean it needs to exist. There's that unwritten rule in Hollywood that if one movie pulls off the numbers at the box-office, the same formula can be repeated again and again for pay-dirt until it wears itself out with fatigue. The Luc Besson-produced "Taken" series should have retired before the first sequel even happened, but here we are with "Taken 3," the third and presumably last entry (we'll see about that) after the impossibly dopey, unintentionally funny "Taken 2." At this point, who or what is even left to be taken but the viewer of their time and hard-earned dollars? Old habits die hard in "Taken 3," which doesn't welcome a "Taken 4" but isn't unwatchable, either. Besides, when's the last time you saw a movie make hot bagels an important plot point that would have cleared up everything in the plot?

Director Olivier Megaton (2012's "Taken 2") and screenwriters Luc Besson & Robert Mark Kamen return, ripping Bryan Mills' family apart once and (maybe) for all. As Bryan (Liam Neeson) is about to leave Los Angeles for a month on a job, someone else has other plans. Remaining close to ex-wife Lenore (Famke Janssen) but knowing his boundaries as she is having marital problems with her present husband (Dougray Scott), he is soon framed for her murder. Named a prime suspect and getting a little help from his friends (i.e. communication expert, explosives expert), Bryan goes on the run, evading Inspector Franck Dotzler (Forest Whitaker), and will do anything to not lose his college-aged daughter Kim (Maggie Grace). All this time, the real bad guys, led by Russian criminal Oleg Malankov (Sam Spruell) who's after some money (what else is new?), are getting away, but everyone knows Bryan Mills has a particular set of skills and will live to put them all in the ground.

Expectations were low, sight unseen, and while it's certainly a hair better than "Taken 2," "Taken 3" is an adequately made but entirely disposable cash-grab through and through. It is what it is. Held back by the PG-13 rating, almost to an offensively mild degree (particularly during an overly cut sequence of fisticuffs in a liquor store), director Olivier Megaton is not always "on" with the action set-pieces, which is a problem when the action is clearly the selling point. The first car chase of several is actually pretty entertaining and must have taken a lot of effort and planning to stage, while Bryan surviving a car crash off the cliff beside a winding road without a scratch is so absurd that it comes with a flashback of how the magician pulled it off. There might be a few thrills, but who's to feel a sense of adrenaline when most of the action is jumbled and seemingly edited with a strobe inside of a blender? Liam Neeson takes this character through the motions, doing what he does best as no spring chicken and still bringing warmth to his relationship with his daughter. Somehow, Maggie Grace seems more invested for the third go-round than she ever did as Kim, who has to deal with an unplanned pregnancy. Series first-timer Forest Whitaker fills the Tommy Lee Jones part in "The Fugitive" and seems to have filled the thankless role with more backstory than the writers. For no rhyme or reason, he inscrutably fiddles around with a knight chess piece he carries around, nibbles on bagels, and snaps a rubber band around his wrist.

Bryan Mills' particular set of skills has grown so rote and stale that even the crowd-pleasing sight of Neeson kicking ass has lost its joy and surprise, and "Taken 3" is just a connect-the-dots forgone conclusion. In what can only be owed to script contrivances, pure luck, or Bryan's still-undetected psychic abilities, he escapes the police through an underground space under a car in a neighbor's garage that leads to a sewer. Later, Bryan manages to relieve himself of his handcuffs from a cop car, survive a car pile-up on the Interstate 10, as well as the explosion that results after reversing a car into an elevator shaft of a parking garage, and then go unnoticed in convenience stores and college buildings like a ghost or a superhero with an invisibility cloak. He's just that good, folks, or the filmmakers just have to cut corners to keep the sequels going. As the tagline reads, "it ends here," and if that's a promise, Bryan and Kim should go into a witness-protection program. They need a break and so do we.