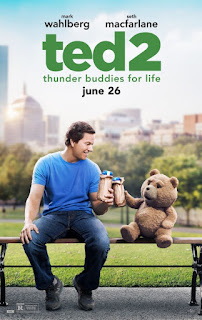 Making it possible for an adorable, pot-smoking, potty-mouthed teddy bear to live on earth and not make humans bat an eye or turn their head, 2012's sweetly profane "Ted" probably should have been a one-and-done hit. It was thin but bawdy, so-wrong, and more than sporadically funny. Obligatory sequel "Ted 2" is definitely at a disadvantage, overcompensating with an overlong running time and an unwieldy narrative structure plagued by stop-and-start pacing, but when the jokes hit, they really hit. After his 2014 sophomore effort "A Million Ways to Die in the West," writer-director Seth MacFarlane still lacks discipline behind the camera, throwing so much at the wall that a sight gag here and a throwaway line there are bound to slide down like a loogie on a mirror. "Ted 2" still scrounges up comic mileage out of the same premise, and plenty of snickers and some hearty guffaws end up sticking. Despite more hit-and-miss vulgarity, it's hard to dislike.

Still residing in Boston and bonding (read: sharing bong hits) with childhood pal John Bennett (Mark Wahlberg), talking plush bear Ted (voiced by Seth MacFarlane) has just tied the knot with his gum-smacking tart girlfriend and grocery-cashier co-worker Tami-Lynn (Jessica Barth). After just a year, their relationship goes on the rocks. When they decide having a baby might just be the answer to their problems, the couple receives a letter from the government in response to their adoption. In their eyes, Ted is property, not a person, and as a result, Ted's marriage with Tami-Lynn will not be recognized by the state and thereby annulled. Enter 26-year-old junior associate Samantha L. Jackson (Amanda Seyfried)—yes, Sam L. Jackson, like the actor, even though she's not up on her pop culture or apparently has never seen a movie before—who has an interest in Ted's case, happens to smoke out of her own bong in the office to curb her headaches, and tries to salvage his civil rights.

As long as writer-director Seth MacFarlane and fellow co-writers Alec Sulkin & Wellesley Wild stick to peppering scenes with loopy non-sequiturs and wickedly cutting verbal interplay, "Ted 2" moves like comedic clockwork. Over the opening credits, a splashy Busby Berkeley-style dance number on a stage-sized wedding cake is spirited and impressively choreographed. A random cameo by Liam Neeson involving Trix cereal is very funny. A visual homage to "The Breakfast Club" is cute, but one to "Jurassic Park" has perfect timing. There is also an irrelevant bit at a comedy improv night where John and Ted both shout out inappropriate things. Potentially too-soon references to 9/11, Robin Williams, and Ferguson, MO, at a comedy improv show will uncomfortably amuse for the daring or just leave a bad taste in one's mouth. Again, with every hit, there is a miss. Ted's Paddington raincoat is a funny sight, but the whole joke with Patriots quarterback Tom Brady does not fare that well. Like something out of a Farrelly Brothers raunchfest or any one of the "American Pie" movies, there is a crass gross-out gag that could have been snipped altogether, considering it lends no payoff to Ted and Tami-Lynn having a child. Ted and John get into deep with some sperm bank hijinks, and the alleged shock of what happens to John can't be unseen, but it's more like the height of bad taste than hilarity. A dressed-as-The-Tick Patrick Warburton and his new partner ("Star Trek" vet Michael Dorn) take shots at geeks at New York's ComicCon convention; it's cruelly amusing the first time and tiresomely cruel the four times it's repeated.

Even when Ted is being a derogatory jerk, he maintains a fluffy cuteness, and the whole CG effect of a talking stuffed animal is still quite seamless. MacFarlane and Mark Wahlberg still share a likable chemistry and credible loyalty in their thunder-buddies-for-life friendship. With Mila Kunis' Laurie written out of the sequel (she and John divorced six months ago), Amanda Seyfried's Sam L. Jackson is the love interest here for Wahlberg. She is a loose, skilled comedienne in her own right and a game player. One would have to be the latter with the running digs at her big eyes, this being the second time her peepers work themselves into the script after her squandered participation in MacFarlane's "A Million Ways to Die in the West." Such gameness extends to even class-act Morgan Freeman, who's a good sport, but once he comes in as a civil rights attorney, the film has already begun stretching itself thin.