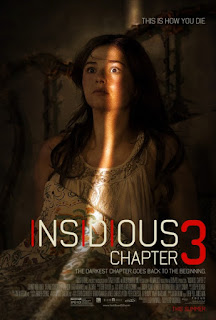 Scare engineer James Wan pulled off the impossible with 2011's "Insidious," a bump-in-the-night spookfest that was legitimately scary and visualized some of the most unforgettably unnerving imagery in a long while, even without much blood and within the confines of a PG-13 rating. Now, if 2013's Wan-directed "Insidious: Chapter 2" cleverly and seamlessly came full circle, "Insidious: Chapter 3" finds a new beginning as a prequel. Busy working on a little indie called "Furious 7," Wan sits out this third but chronologically first entry, although he has his name attached as a producer and has a cameo, but writer and co-star Leigh Whannell, who created "Insidious" and "Saw" with Wan, directs for the first time here and shows promise. As an addition to this ooga-booga series, it's effectively startling in the scare department and brings more emotional stakes than are usually found in most horror sequels.

"Insidious: Chapter 3" takes place a few years before the haunting of the Lambert family, led by husband Josh (Patrick Wilson) and Renai (Rose Byrne). This time, we follow high school senior Quinn Brenner (Stefanie Scott), living in an apartment building with widower father Sean (Dermot Mulroney) and little brother Alex (Tate Berney), whom she's forced to get ready in the morning for school. Quinn has lost her mother to cancer a year and a half ago and wants to contact her, so she seeks help from veteran medium Elise Rainier (Lin Shaye). Elise vowed to stop her readings, but sympathizes with Quinn before she realizes why she quit using her gift. "If you call out to one of the dead, all of them can hear you," Elise warns Quinn, but we all know that advice will be ignored. After an audition to an N.Y.C. theatre school, Quinn gets into an accident that results in two broken legs, rendering her immobile and more vulnerable to an insidious entity who isn't her mother. Once Sean comes to Elise for her expertise to help his daughter, an evil presence has already latched itself to Quinn to make itself stronger, and Elise is their only hope.

After the histrionic violins that shriek over the title sequence, "Insidious: Chapter 3" then settles into a more disciplined horror film relying on darkness and carefully executed jolts. Being in the horror arena for a while now, it's almost shocking that this is writer-director Leigh Whannell's first rodeo behind the camera. Cover-your-eyes tension mounts, particularly in Quinn's bedroom. Laying in bed, she knocks on the wall behind her, communicating with the neighbor boy, Hector (Ashton Moio), who obviously pines for Quinn. Trouble is, she soon receives a text from Hector that he isn't home. Whannell's framing with cinematographer Brian Pearson is also just right when it comes to giving the characters and the audience a glimpse of "The Man Who Can't Breathe," the demonic specter in question being a wheezing old man in a hospital gown with a breathing mask. Whether characters are following the demon's tar-like footprints, or finding him on the ceiling, or standing behind bedroom curtains, or seeing him waving in the wing of a theater, the way his presence is captured is truly unsettling and fearsome. When Sean enlists initial help from the "Insidious" movies' comic relief, amateur ghost hunters Specs (a mohawked Angus Sampson) and Tucker (Whannell) who clean house on their web series "Spectral Sightings," a camera they strap to Quinn's head is a fun opportunity to crank up anticipation. The other plane that Elise calls "The Further" is revisited and it's still an atmospheric roadside funhouse, this time inside of a creepier version of the Brenner family's apartment with long, carpeted hallways that one can't help but be reminded of "The Shining."

An undervalued 71-year-old ham of a character actress whom one is always glad to see and will always be remembered for playing Cameron Diaz's overtanned roommate Magda in the Farrelly brothers' "There's Something About Mary," Lin Shaye has been a well-featured asset to the "Insidious" franchise, as she makes the most of this paranormal hokum and dishes out exposition without making it feel like a slog. Here, the role of Elise Rainier is more than a ghostbusting plot device, giving Shay even more emotional meat to chew on and even more time to be a badass who's so damn cool and isn't afraid to push a ghost who wants her dead. The film also foreshadows Elise's fate to the "Bride in Black," which is no spoiler if you have seen the first film. Newbie Stefanie Scott, a Disney Channel alum, is appealing and emotionally vivid as teenager Quinn, who must loosen her dreams to go to college but gets her world turned upside down even more so once the malignant entity attaches itself to her. The bigger name here is Dermot Mulroney, and he's sympathetic enough, displaying the frustrations of a single parent and trying overall to add more dimension to the parental role than most in this kind of film. Also, she may disappear halfway through, but Hayley Kiyoko is such a charismatic presence as Quinn's wisecracking best friend Maggie that one wishes she had more participation in the story.

This installment doesn't have the nerve-wrecking set-pieces or the unforgettably unnerving imagery of "Insidious," but it prods one with several fun jolts to keep one in a frightful hold. Leigh Whannell thankfully relies more on practical effects, too, rather than hokey CGI. He must not believe in false alarms, which is also a good sign, and when it comes to the jump scares, they pay off because they feel earned. Characters are braver or more idiotic than anyone else would be by investigating gooey footprints down to a dark basement. A couple of them also put their heads where they shouldn't, but in that case, Whannell employs misdirection when Sean and Quinn each look outside a broken window of the empty apartment above them. We have a sense that something will jump out, but it's the "when" that keeps us tense. Finally, never has an "Insidious" movie aimed for the heart, but Whannell allows Shaye to pull it off. For everything it does right, and in the wake of the "Poltergeist" remake, "Insidious Chapter 3" is above par for studio horror pictures.