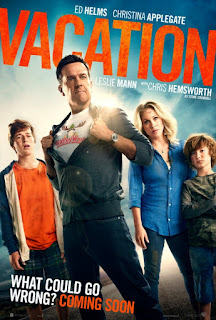 Last time we saw the Griswold clan, Chevy Chase's Clark and Beverly D'Angelo's Ellen took the kids, Rusty and Audrey (both recast for the fourth time, from Anthony Michael Hall and Dana Barron, to Jason Lively and Dana Hill, to Johnny Galecki and Juliette Lewis, to Ethan Embry and Marisol Nichols), on yet another family vacation to Las Vegas of all places in 1997's, you betcha, "Vegas Vacation." Now, eighteen years later, Rusty (Ed Helms) is now a husband and father, and the apple doesn't fall far from the tree; like dear old Sparky, Rusty just wants to have a fun Griswold family vacation in "Vacation," more of a sequel to 1983's "National Lampoon's Vacation" than a remake. Before one gets all up in arms about recharging the series, debuting co-writers and directors John Francis Daley and Jonathan Goldstein (the scribes of 2011's "Horrible Bosses" and 2013's "The Incredible Burt Wonderstone") have taken it upon themselves to evoke sentimental value and still make their comedy its own entity.

All grown up but still bumbling, Rusty Griswold keeps on smiling, even as his job as a Chicago pilot at the lower-rung Econo-Air leaves more to be desired. It's coming up to his annual family vacation in the same cabin in Cheboygan, Michigan, but wife Debbie (Christina Applegate) is ready to shake things up, maybe even see Paris. Rusty feels the same way, although his idea of that is taking Debbie and their two sons—the timid, awkward James (Skyler Gisondo) and the expletive-dropping, nastily mischievous Kevin (Steele Stebbins), who relentlessly bullies his big brother—to Walley World like his own dad did three decades ago. Rusty rents a Tartan Prancer hybrid minivan—"the Honda of Albania"—and packs up the family, and off they go. Along their way, though, the family makes plenty of stops and nothing will ever go as planned, like an enactment of Murphy's Law, or else this would be a pretty boring family adventure.

Nostalgically set to Lindsey Buckingham's single "Holiday Road," the film's opening credits reveal a montage of regular folks' family vacation photos, each of which have something off-kilter about them, and take audiences back to the first time they heard it in the Harold Ramis-directed, John Hughes-written original. From there, 2015's "Vacation" stays true to that comedy cornerstone's wacky spirit, while recognizing that haters are going to hate. Writer-directors John Francis Daley and Jonathan Goldstein acknowledge the elephant in the room with a knowing wink and then move on. "We're not re-doing anything," Rusty assures his family; when the eldest son says he hasn't even heard of "the original vacation," Dad puts the kibosh on the conversation with, "Doesn't matter. The new vacation will stand on its own." Like the original film in its dark treatment of Imogene Coca's pain-in-the-rump Aunt Edna and her dog Dinky, this sequel-cum-reboot has a vicious streak but still keeps everything farcical. Constantly, the film seems to just narrowly avoid mean-spiritedness and desperation. For examples of the former, a callback to Christie Brinkley in a flashy convertible catching the eye of Clark gets nastily subverted, and youngest son Kevin ruins James' on-the-road eye-lock with Adena (Catherine Missal) in a passing car with a sneak attack involving a plastic bag. As far as desperation goes, the family's misadventure in an off-the-map "hot springs" site indulges the most in gross-out humor, but somehow, the cast makes it amusingly gross rather than just gross. For more of the cringe-worthy, "did they really just go there?" variety, Rusty fails at being his eldest son's wingman and then explaining a "rim job" to him, just like Clark's many "teachable" moments in the previous films.

On the relatively cleaner side, there's a sly slapstick moment with a rock and a fire hydrant inside of a tumbleweed in the Arizona desert, and Seal's "Kiss from the Rose" also has its place in the story, as Rusty tries getting the carload to sing along on the long road. The Griswolds' Albanian minivan rental is a big source of comedy, getting the family into even more of a mess than the original's Wagon Queen Family Truckster station wagon with its various remote-control buttons; even the running use of their GPS's angry Korean voice gets a laugh every time. A bit at the Four Corners Monument is original and clever in concept, but after four comedians cameo, the joke mostly falls flat. More inspired is a white water rapids sequence with the Griswolds' chipper rafting guide (Charlie Day), who grows suicidal after a break-up phone call. Finally, a nasty brawl in the front of the line for Walley World's "Velociraptor" roller coaster, set to Sleigh Bells' "Crown on the Ground," earns the belliest of belly laughs.

Ed Helms is earnest and cluelessly good-natured as Rusty Griswold, striking just the right balance of naiveté and oafish likability like Chevy Chase did thirty-two years ago as the hapless patriarch who isn't always in the right but just wants to spend quality time with his family. The vastly underrated Christina Applegate is pleasingly cast as Debbie Griswold, getting to let loose and be a terrific foil for Helms. Instead of the actress being stuck making Debbie the long-suffering wife, a stick in the mud, or just the voice of reason, Debbie genuinely loves her husband and wants to save their marriage. In her big moment when the family makes a stop at Debbie's alma mater and sorority, where she was known as "Debbie Do Anything," Applegate fearlessly throws herself into the physical comedy—and gets to blow some chunks when trying to live up to her legendary nickname. She is able to make the smallest of looks funny when just riding shotgun and shooting off a throwaway line, like "I feel like your Cousin Eddie's family," after being covered in human feces after taking a dip in raw sewage (don't ask). Filling out the parts of the Griswolds' sons James and Kevin, Skyler Gisondo (2014's "Night at the Museum: Secret of the Tomb) is endearing and expressive, while Steele Stebbins (2014's "A Haunted House 2"), whose Kevin could be a future psychopath until James realizes their size difference and turns the tables on his bullying little brother, is clearly up to the task to play an uninhibited terror. Pit stops include the brief returns of Audrey Griswold, now played by an underused Leslie Mann, in Texas, as well as Chevy Chase and Beverly D'Angelo. As Clark and Ellen, now the owners of a San Francisco bed-and-breakfast, Chase (who still bumbles well when reaching for an old guitar out of a glass case) and particularly D'Angelo don't get a lot to do, either, but it's nice to see them. Besides, this is really Rusty's family vacation. A valiant Chris Hemsworth mixes it up and hijacks every scene he's in with complete gusto as Audrey's hunky husband Stone Crandall, a smarmy, cattle-raising (and well-endowed) TV weatherman who references faucets any chance he gets. Also, standout Regina Hall has one very funny scene as a neighbor having dinner with the Griswolds and annoyed that Debbie never clicks "like" on her vacation photos on Instagram.

Under the mandate that all R-rated comedies of the 21st century must be filthy and lewd, "Vacation" earns its MPAA rating through and through. It's frequently outrageous in ways that are not only broad and situational but also blue, raunchy, and just rollickingly funny. With that said, comedy is and will always be relative, so if watching Rusty and Debbie attempt to rub a graffitied penis off their van without knowing how suggestive it looks sounds too crass for you, then staying home might be the better option. Crude humor can definitely work with game performers and directors who have a knack for proper comic timing and payoffs to their setups, and luckily, this laffer has both. An anarchic, over-the-top, anything-goes romp that cheerfully crosses the line and should be judged on the high number of hearty laughs it delivers, "Vacation" accomplishes what it sets out to do as a hijinks-heavy road comedy and stands upright as the even-less-PC sibling to the early-'80s mainstay. Uptight snobs who hate to laugh will be miserable, but it's their loss.