Shrinkage is Better: "Ant-Man" smaller, more self-contained and a lot of fun 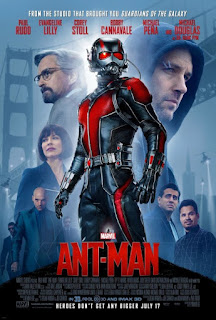 As the last of Phase Two in the so-called "MCU" (Marvel Cinematic Universe), "Ant-Man" is, like 2014's "Guardians of the Galaxy," another off-brand comic-book property and more in the jokey, jaunty spirit of the Phase One offerings before everything became an interconnected machine. Working from a screenplay by Edgar Wright & Joe Cornish (2011's "Attack the Block") and "Anchorman" creator Adam McKay & Paul Rudd, director Peyton Reed (he of "Yes Man," "Down with Love" and "Bring It On") is perhaps not the first choice one would expect to call the shots on a superhero tentpole with all the Joss Whedons and Jon Favreaus existing in the world. In fact, co-writer Edgar Wright (he of the Cornetto trilogy: "Shaun of the Dead," "Hot Fuzz" and "The World's End") was attached in the beginning before leaving the project due to creative differences, but the finished product never feels like a noticeably muddled vision. Reasonably smaller, comparably self-contained and far less plot-heavy than Marvel's earlier superhero offering this summer season ("Avengers: Age of Ultron"), it is a pipsqueak but such a lively, likably unpretentious pipsqueak.

Released from his three-year stint in San Quentin State Prison for pulling off a grand heist, non-violent cat burglar Scott Lang (Paul Rudd) searches for gainful employment in order to afford child support for daughter Cassie (Abby Ryder Fortson), who's living with Scott's ex-wife (Judy Greer) and cop beau (Bobby Cannavale). After working the counter at Baskin-Robbins doesn't even pay off due to his criminal record, Scott initially resists a job offered to him by former cellmate Luis (Michael Peña), insisting that he needs to stay straight. Meanwhile, physicist and technology company founder Dr. Hank Pym's (Michael Douglas) research and shrinking technology is being taken too far by protégé-turned-CEO Darren Cross (Corey Stoll), who has cracked Hank's formula to replicate a rare group of subatomic particles. Hank's headstrong (and seemingly estranged) daughter, Hope (Evangeline Lilly), is employed by Cross but clandestinely in cahoots with her father to stop the egomaniac. Coincidentally, after Scott takes on the score, the mansion that he breaks into happens to belong to Hank, whose safe doesn't contain a fortune but a suit that allows its wearer the ability to shrink to the size of an insect and grow to regular size on a dime. Even more coincidentally, Hank already has Scott in mind to be the perfect soldier and the new "Ant-Man."

In spite of Edgar Wright dropping out at the helm and being replaced by Peyton Reed, "Ant-Man" very much works on its own terms and has plenty of that filmmaker's quirky sensibilities. Besides, judging the film for what it isn't rather than for what it is is making a mountain out of an ant hill. It might have all of the ingredients of a superhero's origin story, albeit tweaked by Scott shrinking to size, but with those checked boxes come snappy amusement and fleet, light-on-its-feet pacing. The film has more stand-alone value, once again akin to "Guardians of the Galaxy," rather than trying too hard to be of an obligatory piece with the MCU. Considering Ant-Man was one of the original Avengers, there have to be name-dropping references to "The Avengers," plus a cameo, but they are cute without feeling forced or distracting. Though the unstable Darren Cross creates a suit called the "Yellowjacket" that he intends to sell to world-domination organization HYDRA, the emotional stakes are, for once, less global and more personal. There is even a cohesive through-line about fathers and daughters, mentors and protégés.

Having physically buffed up for the part of burglar Scott Lang and alter-ego superhero Ant-Man, Paul Rudd is perfectly miscast, so to speak. The never-not-affable actor has honed the ability to make a somewhat smarmy or unappealing character the complete opposite with his innate charisma and verbally nimble comedic chops, and Rudd makes it work here. As original Ant-Man, Dr. Hank Pym, Michael Douglas is enjoyably grumpy and hasn't been this energized in a while, and the 1989-set opening might feature one of the most impressive "de-aging" effects on Douglas' face. As Hank's independent-minded daughter Hope, a black-bobbed Evangeline Lilly has a slinky, appealingly no-nonsense presence, but her quasi-romance with Scott comes too late to really register. Corey Stoll is appropriately sinister, having some snarling bite as resident villain Darren Cross, and he has his beautiful Lex Luthor bald head going for him, but the script gives him few chances for shadings beyond his feelings toward Hank as a father figure. In the comedic sidekick role, Michael Peña threatens to run away with the whole thing as Scott's trustworthy former cellmate Luis. He could have been another Hispanic stereotype, but every time he recounts a story from a friend of a friend in which his voice dubs over theirs, Peña makes Luis more infectious. Poor Judy Greer has paid her dues, always being cast as Best Gal Pal in romantic comedies, but gets her third thankless mom role here this summer (her expansive screen time was obviously left on the cutting-room floor in "Tomorrowland" and she made the most of a limited part in "Jurassic World.") As Scott's ex-wife Maggie, now remarried to cop Paxton (Bobby Cannavale), she at least never allows her on-the-sidelines character to descend into a naggy shrew but remain an understanding mother who just wants what's best for her daughter. That brings us to 7-year-old Abby Ryder Fortson, who's naturally darling without doing any mawkish child-actor mugging.

Instead of devolving into a cacophony of bombastic pixels and pyrotechnics, "Ant-Man" actually opts for joy and inspiration, treating the usually large hero-vs.-villain smackdowns on a much smaller scale, and has a ton of fun with its inherently silly premise. Evoking the formerly cutting-edge effects of "Honey, I Shrunk the Kids," Scott's dizzying "test drive" with the suit that sends him to the bottom of a bathtub to the dance floor of a disco club to an encounter with a mouse and a vacuum cleaner is surprising and thrilling. Scott must also work together with four different types of ants, all with their own special skills (one of which is moving a sugar cube across the dining room table for tea). A bit with an iPhone playing The Cure's "Plainsong" in a falling briefcase is laugh-out-loud funny and almost trippy in its execution. The third-act showdown is great fun, cleverly bringing in a bug zapper and then evoking "Toy Story" when Scott's Ant-Man squares off with Darren's Yellowjacket in Scott's daughter's bedroom on her Thomas the Tank Engine train set. There's also an amusing payoff when certain items are enlarged by accident. Without comparing it to the rest of other Marvel superhero products, "Ant-Man" actually feels fresh and hand-made with a cheeky personality of its own. It has enough weight and danger to not just be fluffed off as a lark, but it's also a breezy, enormously entertaining pleasure that doesn't believe in serious faces and proves size does not matter.