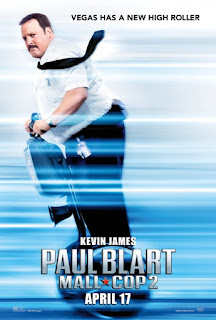 Believe it or not, 2009's "Paul Blart: Mall Cop" has its fans. Yours truly is not one of them, but as a PG-rated "Die Hard" comedy with the affable Kevin James bumbling around on a Segway, it is more harmlessly mediocre and disposable than downright terrible. With that said, a number "2" never needed to be added to "Paul Blart: Mall Cop." Six years later, here we are with just that, "Paul Blart: Mall Cop 2," a sequel not a single soul was demanding or marking his or her calendar for that turns out to be virtually the same movie, only actively worse. There's nothing more deflating than a comedy that doesn't make you laugh once, won't keep you entertained, and can't make you feel or think about anything. "Paul Blart: Mall Cop 2" isn't only consistently flat and imbecilic. Directed this time by Andy Fickman (2012's "Parental Guidance") and written again by star Kevin James and Nick Babay, it just sits there and doesn't do anything worth one's time and patience.

If you have any recollection of seeing the first film, New Jersey security guard Paul Blart (Kevin James) saved Black Friday at the (fictional) West Orange Pavilion Mall from a band of thieves. After six days of marriage before his wife (Jayma Mays, who dodged a bullet with this one) divorces him and then losing his mother (Shirley Knight) to the wheels of a milk truck, he gets some good news: Paul has been invited to the Security Officers Trade Association expo in Las Vegas. Overprotective of his daughter Maya (Raini Rodriguez), who's just been accepted to UCLA but keeps it from her father, he brings her along and checks them into the luxurious Wynn Resort. When Maya inadvertently walks in on a crooked shipping tycoon (Neal McDonough, who gets to wear a different colored contact lens but indifferently plays his hundredth bad guy) in the middle of a heist to steal the hotel's artwork, only her doofus dad can come to her rescue.

For whatever reason, Kevin James can't seem to find himself a good feature comedy, at least not yet. It's in him somewhere, but it just hasn't happened yet. Besides showcasing his comedic timing on the big screen alongside Will Smith in 2005's "Hitch," his best work still remains on TV's "The King of Queens." Paul Blart, the likably tubby hypoglycemic cop, was kind of sweet and proved himself capable in the first one. As James reprises the same role, the character is established as heartbroken and lonely once again, but he becomes selfish, condescending, and even more clueless in the process, and that's no fun. Also, under better circumstances, the delightful Raini Rodriguez has enough talent to someday shoulder her own starring vehicle.

Reeking of sweating, wheezing desperation, "Paul Blart: Mall Cop 2" has seemingly been made by easily amused people who think silly slapstick and buffoonery are funny in themselves, but none of the jokes land. In fact, it feels like someone forgot to actually insert the jokes. Is anyone even trying here? It couldn't be less amusing if it tried, no matter how many times Paul Blart drives around on his Segway or beats up a peacock. Sitting through 94 chuckle-free minutes of this supposed comedy is like having a staring contest with the screen, and with it offering scant smiles and zero well-earned laughs, you still come out the winner.