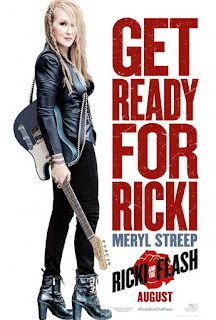 In a way, "Ricki and the Flash" sounds like a bummer of a story about an unapologetic mother who abandoned her family to pursue her dream in music and to this day is still chasing that dream. Instead, the pairing of director Jonathan Demme (who won an Oscar for 1991's "The Silence of the Lambs") and screenwriter Diablo Cody (2013's "Paradise"), a go-to girl for the hip and acerbic, forms a warmly humanistic, blissfully entertaining comedy-drama out of such a story that eases up on plot contrivances and just lets its characters breathe. There are also just enough musical moments that mostly arise naturally and play out entirely without the film losing its heart and soul. "Ricki and the Flash" isn't particularly memorable, but it is a disarming joy to watch just the same as an end-of-the-summer entertainment for grown-ups.

Formerly Linda Brummell, Ricki Rendazzo (Meryl Streep) is broke but rewarded by performing with her beloved cover band The Flash in a Tarzana, California, watering hole for loyal barflies. She can barely afford her small one-bedroom apartment as a cashier at a Total Foods, but she grins and bears it. Then Ricki gets a phone call from ex-husband Pete (Kevin Kline) in Indianapolis. Their daughter, Julie (Mamie Gummer), is in a deep depression after an abrupt separation from her husband who left her for someone else. It's not going to be a welcome reunion, but Ricki uses all the cash she has for a flight to console her daughter and reunite with her family whom she left to pursue her rock 'n roll dreams. Once there, Pete lets his ex stay in the guest bedroom, having plenty of room. Ricki tries getting the bitter and seemingly inconsolable Julie out of her funk and then reunites at dinner with her other children; son Josh (Sebastian Stan) is glad to see his mother but failed to share the news with her that he's getting married to bourgeois fianceé Emily (Hailey Gates), and now-openly gay son Adam (Nick Westrate) still holds resentment. Things become harder for Ricki when Maureen (Audra McDonald), the woman Pete remarried, returns from visiting her ailing father since she is the one who filled the maternal void for Ricki's children.

A comparably warm-blooded cousin to director Jonathan Demme's own 2008 dysfunctional-family drama/character study "Rachel Getting Married," "Ricki and the Flash" is still low-key where it counts. Once Ricki flies to Indianapolis and walks into her ex-husband Pete's McMansion, the film never turns into an inane, clichéd, out-of-touch fish-out-of-water comedy, even with the use of Pete's standard poodle. Screenwriter Diablo Cody based the character of Ricki on her own mother-in-law, and she pens a script without any of her trademark snark from "Juno" and "Jennifer's Body," or her uncompromising tanginess in "Young Adult." "Ricki and the Flash" is the least edgy of Cody's writing efforts, but it's still a refreshing change of pace. As a character, Ricki is far from perfect. She left her family and put herself first, which could be seen as selfish or just free-spirited, but also acknowledges societal double standards that musician fathers, like Mick Jagger, are let off the hook when leaving home. She's also a woman of contradictions, being a hippie but sharing conservative political views (i.e. she voted for George W. Bush and doesn't care too much for Barack Obama), despite mostly accepting her gay son. How everything plays out with a ring of truth is a major testament to Cody, who gives her characters lives off the page without constraining them to narrative contours and really listens to them without demonization or complete admiration.

It should become tedious at some point to keep seeing an actress who can do anything and never take a false step, but Meryl Streep really can do anything. As Ricki, she is effervescent, lived-in, and all around wonderful, letting loose in her rocker-girl leather pants and braided hair but also processing mixed emotions in her face without uttering a word. Even if Streep doesn't steal an Oscar nomination for her character work as Ricki Rendazzo—it's much less flashy than her outspoken, pill-popping, chain-smoking Violet Weston in 2013's "August: Osage County"—the role is tailor-made for her, and the fun she's having rocking on is readily apparent. Watching Streep and her real-life daughter, Mamie Gummer, is a real treat. Gummer's uncanny resemblance to her mother makes their strained, uncontentious relationship that much more resonant. Gummer, herself, is terrific as Julie, a young woman at an early point in her life where the rug is taken out from under her; it's heartbreaking what she's going through but the seriocomic use of her blunt, unfettered mouth and pajama-wearing, wildly disheveled-haired appearance also make Julie quite the scene-stealer. Streep and Kevin Kline also share lovely moments in a "Sophie's Choice" reunion of sorts; their civil relationship dares to not go the melodramatic route that one might expect. When Ricki snoops through Pete's fridge, she notices a bag of marijuana, and as soon as the two of them indulge a little, the scene luckily doesn't go for the obvious with two exes having a hazy-headed moment. As The Flash's guitarist Greg and Ricki's salt-of-the-earth sort-of boyfriend who later becomes the real thing, '80s rocker Rick Springfield sells a few heartfelt speeches about second chances, so who knew? Stan Sebastian and newcomer Nick Westrate, as sons Josh and Adam, are fine with what they are given, particularly in a dinner scene that fluctuates between funny and uncomfortable as they needle their mother, but Audra McDonald, the "Meryl Streep of Broadway," is superb in only a few scenes as Pete's new wife Maureen, her big one being a confrontation with Ricki. In an inferior script, Maureen's characterization would be that of a saint or an one-dimensional harpy whom we are supposed to hate over Ricki, but that isn't the case here, as Diablo Cody observes her with a sympathetic eye.

"Ricki and the Flash" probably won't be remembered as the deepest or even always the most subtle of films—notice all of the reaction shots from WASPy guests shooting Ricki disapproving looks for performing at Josh's wedding reception—but that's never a crime when the film in question is such a pure crowd-pleaser without stooping to cheap manipulation to tug the heartstrings. Much of the film works more than it has a right to, given Diablo Cody's alternately warm and acerbic writing and performances that help convey more depth in these people. A few additional scenes with the underwritten son characters wouldn't have hurt, given how easily they come around by the end, but the surprising way in which Maureen is handled is a major plus. Aurally, the film also hits a pleasurable sweet spot with Streep singing covers of Tom Petty and the Heartbreakers' "American Girl," Edgar Winter's "Keep Playin' that Rock 'n' Roll," Dobie Gray's "Drift Away," Lady Gaga's "Bad Romance," as well as a Jenny Lewis and Johnathan Rice-written original, "Cold One." By the end, Ricki still has her regrets but she has her own gift to give to her family. If the big concert at the wedding is a little pat and contrived, so what? The emotions always feel authentic and unguarded, and the good vibes the entire film carries throughout are irresistible.