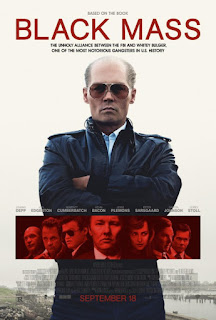 Like a modern-day Lon Chaney, Johnny Depp actually lives inside the make-up of James 'Whitey' Bulger, Boston's most notorious gangster-turned-fugitive who committed as many crimes as drug dealing, racketeering, extortion and murder. The consummate acting chameleon, who has fallen into a comfort zone of playing dress-up for far too long, should not be underestimated this time in "Black Mass," a gritty, bloody, gripping 1970s Boston-set crime saga that shoots for electrifying greatness without grasping it but nevertheless delivers as a mature effort. Buried underneath a head of thinning, slicked-back hair, the crystal-blue eyes of a predator, and a sinister smile that reveals a dead tooth, Depp is the magnetically vicious centerpiece, but director Scott Cooper (2013's "Out of the Furnace") and screenwriters Mark Mallouk and Jez Butterworth (2014's "Get on Up") aren't exactly slouches in their efforts, either. Along with any upcoming picture about organized crime that comes down the pike, "Black Mass" invites comparison to the gangster genre's benchmarks, 1990's "Goodfellas" and 2006's "The Departed," but what the makers brought to fruition is more of a grim slow-burn than a stylistically vibrant copy of a Martin Scorsese opus.

Based on Dick Lehr and Gerard O'Neill's 2013 true-crime novel "Whitey: The Life of America's Most Notorious Mob Boss," the film will inform those who are less aware of the fascinating particulars behind Irish-American mobster James 'Whitey' Bulger's story. From the points of view of his criminal associates who come forward to the FBI, a confessional framework begins flashing back to 1975 when Bulger is back in South Boston from spending time in Alcatraz for nine years. He's laying low, but has acquired his Winter Hill Gang, including right-hand man Steve Flemmi (Rory Cochrane), go-to executioner John Martorano (W. Earl Brown), and trusted muscle Kevin Weeks (Jesse Plemons). Once the Italian mafia starts coming into his territory, Bulger is met by a childhood friend, FBI Agent John Connolly (Joel Edgerton), and they strike up a deal in which the criminal will be their informant and provide the Feds with information to bring down the Italians. This alliance grants Bulger immunity from his crimes that the FBI seem to turn a blind eye to, but as the bodies pile up well into the '80s, everything begins catching up with Connolly.

Considering his recent catalogue of outlandish, over-the-top "characters," worst of all being a buffoonish, mustachioed art dealer in this year's disastrously shticky "Mortdecai," Johnny Depp might be next to make an overdue acting renaissance as the diabolical James 'Whitey' Bulger. In essaying an intense, cold-blooded sociopath acting upon his formidable rage, Depp is utterly chilling, but he also conveys the love and loyalty he had for his family and community. He will play a benign game of cards with his mother or have his gang help an old neighbor with her groceries, but then again, he can't help himself when giving his son, Douglas (Luke Ryan), advice to punch someone only if there are no witnesses. If there's a more internal, morally grey struggle to project, Joel Edgerton does more strong work as FBI Agent John Connolly, who makes a deal with the Devil and, in a way, is more of a corrupt weasel than Bulger.

Chock-full of A-list talent, the film sports a sprawling ensemble, all of them taking on acceptably believable Boston accents. Jesse Plemons disappears fully into his role as Kevin Weeks, not just from the fact that his putty-face makeup makes him look like Mark Wahlberg, and Rory Cochrane does subtle work as Bulger's close associate, Stephen Flemmi. Peter Sarsgaard makes a memorable turn as jumpy, coked-up hitman Brian Halloran, and David Harbour, Kevin Bacon, Adam Scott and Corey Stoll round out the roster of those in the FBI office. A film like this even squeezes in Benedict Cumberbatch as Bulger's privately devoted senator brother Billy. The women in the picture remain on the fringe, but they all stand out. Even if it's just a thankless spousal role and she vanishes all too soon without explanation, Dakota Johnson packs heart and fire into Lindsey, Bulger's common-law wife, especially when going head-to-head with the man of the house over a quandary with what to do about their suddenly ailing son. Julianne Nicholson is sensational, bringing vulnerability and bravery to the part of John Connolly's wife Marianne, who refuses to fraternize with any of her husband's informants in her home; a confrontation with Bulger in her bedroom doorway is as uncomfortable and riveting to watch as any of the film's brazenly violent scenes. Juno Temple seems to continue being typecast as tarts, but she still makes an impression out of her brief appearance as Steve Flemmi's prostitute stepdaughter/girlfriend.

What it lacks in verve and pizzazz that might have glorified the crime-ridden lifestyle, "Black Mass" has a legitimate sense of time and place and is kept alive by bursts of savage, unflinching violence, either carried out by one of Bulger's executioners or Bulger himself in broad daylight. Whenever Johnny Depp is on screen, he is such a powerful, unpredictable force that his presence alone is able to eclipse the sometimes overly subdued pacing. That and the film always seems to be rising like a simmering pot. Tension runs particularly thick in a deliciously written, darkly funny dinner scene at John Connolly's house: Bulger asks Agent John Morris (David Harbour) how he made the marinade for the steak, but because it's a "family secret," he won't spoil it. Not much more time has passed before Morris gives away the ingredients, and Bulger's tone grows more intimidating and accusatory. "You spill the secret family recipe today, maybe you spill a little something about me tomorrow?" Without digging too deeply into James 'Whitey' Bulger's psychology for insight to see where the evil stems from—we only know the idea of Bulger, and that's fine—"Black Mass" is still a solid, down-and-dirty crime drama made compulsively watchable by Depp and his stellar support.