Spin Doctors: Predictable "We Are Your Friends" buzzes along with energy and rhythm 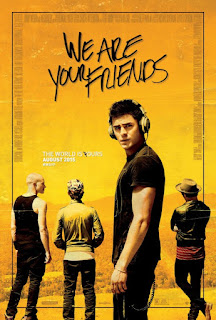 Titled after the featured song by French electronic dance duo Justice, "We Are Your Friends" is a party movie that's less shallow than it appears and actually has a little something going on upstairs. It draws cosmetic comparisons to "Entourage," particularly the vapid movie released earlier this summer, but apart from both centering around a group of bros (one of whom is a driver and nicknamed after an animal), this is the far better movie of the two. The feature writing-directing debut of Max Joseph (who co-hosts MTV's "Catfish: The TV Show"), "We Are Your Friends" is not free of clichés—take out the 1970s disco milieu and John Travolta and you have "Saturday Night Fever" for today's EDM (electronic dance music) with Zac Efron—but as a peek into the untz-untz-untz music scene, there is a lively energy and a hyperactive rhythm to a throughline of youthful longing and one's creative process. It also won't hurt to have an appreciation (or, at the very least, toleration) for the hypnotic sounds of EDM.

"All you need is a laptop, some talent, and one track." Aspiring deejay Cole Carter (Zac Efron) never went to college, but he lives in the San Fernando Valley with his best buds who all want to be part of something bigger. Cole shares a bedroom at the home of Mason (Jonny Weston), who's a brazen and belligerent entrepreneur; Ollie (Shiloh Fernandez) aspires to be a movie star but he's more of a drug dealer and womanizer; and Squirrel (Alex Shaffer) drives them all around. At a local nightclub, Cole doesn't get paid to spin but gets free drinks out of it, while Mason helps promote him. One night, Cole meets a popular deejay named James Reed (Wes Bentley) and falls into the party scene with Reed and his personal assistant-cum-girlfriend Sophie (Emily Ratajkowski), with whom Cole has eyes. The sell-out deejay begins taking the newbie under his wing and sees talent and the ability to work a crowd in him, but Cole will have to stop being an admirer and start finding his signature if he wants to stand out. Meanwhile, Cole and his three other friends go in need of more cash by taking up an offer of Ollie's shady real-estate friend Paige (Jon Bernthal), who helps people go through foreclosures. Will Cole leave behind his childhood buddies or take the moral high road?

Written and directed by Max Joseph and co-written by Meaghan Oppenheimer, "We Are Your Friends" is essentially a rags-to-riches coming-of-ager with story beats we have seen before, but it's done with so much intoxicating visual flair without becoming empty flash. Graphics and words spoken in voice-over flash across the screen, a flourish that might get used too often, although Joseph also finds insight into the process of being a deejay in jolting, inventive ways. At one of James' poolside parties, Cole gives Sophie (and the viewer) a technical crash-course tutorial on how to work a crowd: it only takes one person to get everyone grooving and then, in order to control the crowd's circulatory system and their heart rates, he shows how to find the sweet-spot tempo on the dance floor with 128 beats per minute. Who knew there was so much biology involved? This film also features one of the niftiest PCP trip sequences at an art-gallery party, presented in rainbow-hued rotoscope animation, as if the paintings come to life and the colors bleed off the walls and onto the party guests. The characters can be a little thin and the narrative conflicts may have predictable outcomes, but the throbbing beat of the soundtrack goes on and an ultimate reason to care manifests itself. When the relationship between Cole and Sophie takes up most of the second half, Mason, Ollie and Squirrel kind of get thrown by the wayside. There is a tragedy that occurs in the latter half of the film, and while it could feel like a tacked-on dramatic turn because it helps advance Cole's arc, it seems more inevitable than anything and brings more urgency to everything leading up to Cole's big performance in downtown L.A.

After proving his comedic worth in 2014's "Neighbors," Zac Efron hasn't yet found that one role to show any stretch in his range, but he is immensely talented, magnetic, and more than just a pretty boy who's nice to look at. As Cole, Efron is wholly believable and even appealing, even if a little ambiguity about his family (is he estranged from them?) keeps the viewer from learning how he got to where he is now. Pouty-lipped model-turned-actress Emily Ratajkowski was first recognized as being that naked girl in Robin Thicke's "Blurred Lines" music video, but between playing Ben Affleck's other woman in "Gone Girl" and a mere accessory in the "Entourage" movie, she holds her own here as Sophie. In playing the Stanford dropout who has become James' personal assistant and live-in girlfriend, Ratajkowski really establishes a striking presence, the camera loving her, and she does bring an intelligence and backbone to the part of what could just be "The Hot Girl." Wes Bentley's James Reed turns out to be a sellout and a functioning alcoholic, but the line his performance rides between seductive and smarmy flies in the face of what easily could have been a one-note caricature. Bentley also could have overplayed it, but that never happens. In roles that begin as the leads and then get shortchanged as the film goes on, Jonny Weston (2015's "Project Almanac") convinces as swaggering hustler Mason and Alex Shaffer (2011's "Win Win") registers as the more sympathetic and most sensitive one as Squirrel.

Peppy and fun, but still made with a genuine empathy for its characters, the film also knows how to create a genuine sense of place with the humidity of the Valley pouring off the screen, aided by the grit and naturalism of cinematographer Brett Pawlak's (2013's "Short Term 12") lensing. One sequence, set to Gryffin's remix of Years & Years' "Desire" at Las Vegas' Electric Daisy Festival when Cole breaks away from his pals to go off with Sophia and act upon their attraction, is dreamily romantic. As the first "Magic Mike" was a male stripper movie that was really about the economic recession, "We Are Your Friends" is about the Millennial Generation trying to come up in the world with get-rich-quick schemes and the search for one's artistic voice. It might not be the definitive film of this generation, but what it says about Millennials is both honest and productive. The twentysomethings here rationalize that their generation is all about inventing an app and attaining success. That might be true, but nothing happens overnight. Of course, out of anyone, Cole will learn something by the end, but it actually feels satisfyingly earned.