When a Man Resists a Woman: "Sleeping with Other People" given boost by frank script and likable leads 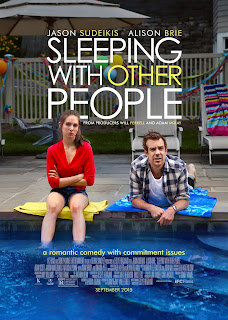 Leslye Headland impressed with her uninhibited, razor-sharp 2012 writing-directing debut "Bachelorette"—an underseen biter of a film that deserved more attention, despite garnering little mainstream appeal outside of its recognizable cast—and to follow it up, she's gone and made a New York-set romantic comedy that is closer to a big-studio film. Aptly described by Headland herself as a "'When Harry Met Sally...' for assholes," "Sleeping with Other People" is certainly more frank and fizzy than the majority of romantic comedies to come down the pike, but it's not as radically fresh as it thinks it is, either. At this stage in the game, as David Wain's cheerfully scathing "They Came Together" has already taken the piss out of the genre, we know that men and women still can't be friends in the 21st century, but writer-director Headland at least pretends they can for a while on a "will-they-or-won't-they?" path with some tart dialogue and mostly likable characters.

Jake (Jason Sudeikis) and Lainey (Alison Brie) first meet as Columbia University undergrads in 2002 and lose their virginity to each other on a rooftop. Still in New York City, they reconnect after twelve years when both walk out of a sex-addiction group. Entrepreneur Jake is a serial cheater who can't commit to any of his girlfriends and Lainey, now a kindergarten teacher, is addictively hung up on her former T.A.-turned-longtime crush, boring, dweebish OB/GYN Matthew Sobvechik (Adam Scott), who's married with a baby on the way. They both need to get their personal lives in order before they can be in a relationship with anyone, so Jake and Lainey make a pact to not sleep with one another, complete with a safe word to break the urge. On their mutual road to celibacy, they each try out their own respective flings, but the viewer already knows what's good for them — hop into bed and get it over with already before Lainey aces her MCATs and relocates to Michigan for med school.

The thing about romantic comedies trying to subvert character types and archetypal narrative beats is that they start to feel homogeneous anyway. As such is the case with most modern examples of the genre, "Sleeping with Other People" includes a no-sex pact in the premise, the frank sex talk, the walking-and-talking in Central Park, the romantic complications and, still, the last-minute decision to go get the girl. What writer-director Leslye Headland does differently here is root her characters' sexual hang-ups in a surprisingly raw honesty, particularly Lainey's obsession with Matthew. After Lainey breaks it off with her current beau (gamely played by Adam Brody) at a restaurant, she immediately texts her go-to sex partner and it is palpable that she hates herself for it. The film does take a bit to find its footing—the laughs aren't quick to land nor do they fire on all cylinders until around the time of Jake and Lainey's first date—but once it does, Jason Sudeikis and Alison Brie really click as an engagingly flawed couple with winning chemistry.

Jason Sudeikis keeps being given leading duties or third billing in studio comedies (2011's "Hall Pass" and "Horrible Bosses," 2013's "We're the Millers" and 2014's "Horrible Bosses 2"), but he seems to remain in his comfort zone, doing the persuasive Chevy Chase thing that he's honed throughout every movie. Here, as Jake, he still gets to play a caddish jerk, albeit a likably caddish jerk who can make written jokes feel germane to the character. If Alison Brie still isn't a household name given her collective work on TV's "Community" and her scene-stealing abilities in another bright romantic-comedy (2012's "The Five-Year Engagement"), she surely deserves to be. Brie is always a wonderful delight with spot-on comic timing, and here as Lainey, she gets to stretch her dramatic muscles. Her character is broken and painfully fragile, continuing to sabotage herself when making herself a booty call for Matthew and have her heart broken. The supporting cast is a strong one, too, filled with the usual-suspect roles that used to be filled by Judy Greer. Natasha Lyonne is there as a sounding board and not much else as Lainey's lesbian gal pal Kara, but the invariably appealing Amanda Peet at least plays the role of Jake's divorced single-mother boss as well as it was probably written with intelligence and well-roundedness. As Jake's best friend and co-worker Xander, Jason Mantzoukas is just okay, but he's more in sync as a pair with Andrea Savage as his wife Naomi. Together, they are hilarious if underused until they get to show what they're made of with their banter during the closing credits.

"Sleeping with Other People" exceeds a flat start and one misstep in the third act, namely a misguided screwball fight during brunch that exists to advance to the resolution, but it buzzes along with enough edge and sweetness to compensate. A scene in which Jake gives Lainey a tutorial on female masturbation, particularly a technique he calls the "dirty DJ," with an empty green tea bottle is very funny without straining too hard. Then, later on, when Jake invites Lainey to drop Molly and attend his friend's 7-year-old son's birthday party, Lainey gives an infectiously loose and fun dance lesson to David Bowie's "Modern Love." The film does find a lovely spot to leave off with Jake and Lainey remaining platonic buddies rather than lovers, but instead of being more honest and satisfying, it inevitably makes its way to the conventional destination. That's no spoiler, and at least there is a cute homage to Mike Nichols' "The Graduate" that gets worked in well with the happy ending. In this genre, it's better to enjoy the journey, especially when it's one that is uncommonly smarter than most.