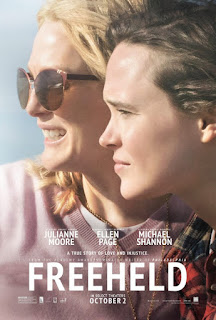 Based on the Oscar-winning 2007 documentary short of the same name, "Freeheld" is timely, well-intentioned and delivers the appropriate emotions for an inspiring true story of a May-December romance that isn't recognized as a traditional marriage. It has the trappings of a preachy Issues Movie of the Week, being about cancer and social injustice, but it's a bit better than that, being buoyed by nice performances. Much like 2014's superior "Still Alice," which was mainly a showcase for one of Julianne Moore's most shattering performances to date as a woman suffering from early-onset Alzheimer's disease but was still made with a more graceful artistry than any Lifetime movie, "Freeheld" seems better suited to the small screen, but the actors finesse the potentially soapy material just enough into making the end product worthwhile.

Ocean County, New Jersey police detective Laurel Hester (Julianne Moore) has been respected by her male colleagues in her 23 years on the police force. She's dedicated to her work, but she's also a very private person and has kept her sexuality in the closet, even away from straight partner Dane Wells (Michael Shannon). She stress-smokes and never stops working, until she crosses state lines to play on a lesbian volleyball team in Pennsylvania and meets tomboyish mechanic Stacie Andree (Ellen Page). Laurel admits she's a bit too old for her, but gives Stacie her number anyway and their relationship gets stronger, despite Laurel trying to keep it a secret from anyone in her professional life. A year later in 2005, Laurel and Stacie get their domestic partnership certificate and buy a home with a garden. It's not until Laurel contracts late-stage lung cancer that the rest of the police force discovers she's a lesbian. Despite Stacie remaining loyal to Laurel and helping her with treatment, the disease is incurable. When Hester first appeals to Ocean County's Board of Freeholders to ensure her pension benefits be passed on to Stacie and allow her to keep their house when Laurel is gone, the same-sex couple is rejected. That's when they hire Garden State Equality founder and chair Steven Goldstein (Steve Carell) to support their cause for equality and it's everyone else against the freeholders.

Director Peter Sollett (2008's "Nick and Norah's Infinite Playlist") and screenwriter Ron Nyswaner (1993's "Philadelphia") do an economical job of setting up Laurel and Stacie's burgeoning relationship, but once they feel the need to have something to prove about gender equality, the film only skims the surface. If anything, Julianne Moore and Ellen Page compute as a loving couple and flesh out their characters as best as the screenplay allows. Continuing to be immune to hitting a single false note, Moore makes a Farrah Fawcett wig look convincing and delivers a tender, nuanced performance as Laurel Hester. Page gives weight and anguish to her on-screen relationship, and she's quite good in her own right as Stacie, an out-and-proud young woman comfortable in her own skin and proving her worth as a mechanic when she rotates tires in under eight minutes. The perpetually wild-eyed Michael Shannon is just as strong, offering dimension and compassion and proving he is capable of more than just disturbed characters, especially after his intense work in "99 Homes." When a yarmulke-wearing Steve Carell comes in as self-described "big, loud, gay Jew" and activist Steven Goldstein, it's a jarring tonal change, but he adds welcome levity and settles believably into the role that calls on the actor to be animated and larger-than-life. As the county freeholders, Dennis Boutsikaris, Kevin O'Rourke, Tom McGowan, William Sadler, and Josh Charles (the one who votes to give Laurel her pension but is out-numbered and doesn't want to ruffle feathers) mostly have one note to play, but at least they don't come across strictly as cardboard caricatures; their beliefs are just frustratingly backward.

Even if "Freeheld" is rough around the edges as a piece of filmmaking, the message is so important and necessary that no one should be discouraged from seeing it. The production is workmanlike at best, and the ways in which Laurel's sister (Kelly Deadmon) and Stacie's mother (Mary Birdsong) are handled in shots and in the script are so awkward. Once the inevitable is established—Laurel's health will only deteriorate—the messaging gets in the way of the two women's relationship and succumbs to trite speechifying in the form of circus rallies in a courtroom. The focus should have always remained on Laurel and Stacie since the moments between them are the best the film has to offer. One would have to be made of stone or an awful, homophobic subhuman to not feel something and share the film's politics, but by the end of "Freeheld," it's difficult not to be impressed more by the moving story being told and the performances than the film itself. It's fine when it could have been so much more.