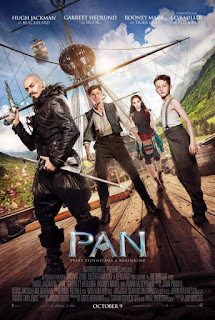 How do you retell a timeless story for a new generation? Sam Raimi's "Oz the Great and Powerful" (2013) was a prequel to "The Wizard of Oz," "Maleficent" (2014) was told from the villainess' perspective, and Kenneth Branagh's "Cinderella" from earlier this year was traditional but classically made. J.M. Barrie's story of "Peter Pan" has already had its own incarnations, whether it be Steven Spielberg's 1991 unfairly panned "Hook," which gave Peter a family and a midlife crisis before returning to Neverland, or 2003's handsomely mounted "Peter Pan" that might still be the quintessential adaptation, so, naturally, a prequel was in order. Retelling "Peter Pan" as another obligatory origin story, "Pan" attempts to explore how the boy who refused to grow up came to be in Barrie's classic tale, but the film doesn't so much explore as it does restlessly bounce from one action set-piece to the next. While it has flashes of oddball distractions that at least give this new vision some personality and a shot in the arm, this 3D-enhanced offering mostly adds up to a busy mess of strange, often baffling ideas and choices. Directed by the usually on-point Joe Wright (2012's "Anna Karenina") and written by Jason Fuchs, "Pan" starts to soar with promise, but how well the film begins tricks audiences into thinking the rest of it will be just as magical, whimsical, and imaginative. So much for happy thoughts.

Before he earned his surname, Peter (Levi Miller) was orphaned by his mother Mary (Amanda Seyfried), leaving him in a basket at the door of London's Lambeth House for Boys with nothing but a pan-flute pendant and a letter. Twelve years later during WWII, the illiterate pre-teen boy starts investigating why his mother left him, against the demands of a grotesquely cruel nun (Kathy Burke), who keeps all of the pastry rations (and a lot of gold) to herself. One night, Peter discovers where the other orphaned boys get lost to when he's whisked away by bungee-jumping pirates out of his bed and imprisoned aboard a pirate ship. Dropped into a cavernous mine in Neverland, he and the other lost boys are forced to dig for remnants of fairy dust to keep the evil Blackbeard (Hugh Jackman) eternally youthful. Then, once he walks the plank, he surprises himself and everyone else that he can fly, a magical ability that Blackbeard can use to his advantage. From there, Peter hooks up with the surly James Hook (Garrett Hedlund) and daft sidekick Smee (Adeel Akhtar) in search of his long-lost mother. And then, they meet up with Princess Tiger Lily (Rooney Mara) and run afoul of Blackbeard and his buccaneers.

A high-end production with a $150-million price tag but little soul, "Pan" throws so much into the pot and on to the screen in a curious "what-am-I-watching?" sort of way, and yet somehow the results are still dull. As a precluding narrative, the film sets up Peter's special ability to fly and the realization of his destiny as "the one"/"the special one" in the eyes of Tiger Lily and her tribe. It also generically establishes characters, like James Hook who will soon become Peter's hook-handed archenemy, and creatures, like the crocodile and mermaids (all three of them lucky enough to look like Cara Delevingne), without doing much with them. Aesthetically, the sight of Blackbeard's pirate ship flying up and away from the orphanage during the London Blitz's air attacks is wondrous and exciting, as is the one of Peter floating through the solar system and reaching out to Saturn. An expository scene involving Pan's parents, a warrior and a prince, is also neatly imagined with stop-motion through a memory tree. However, more so than not, the gimmickry of 3D becomes so transparent and dizzying. Anachronistic music can also work in film as a boldly exciting integration—"A Knight's Tale," "Moulin Rouge," and "The Great Gatsby"—but the inclusion of Nirvana's "Smells Like Teen Spirit" and The Ramones' "Blitzkrieg Bop," chanted by Blackbeard's pit-miner children, just seem like random, weird-for-weird's-sake choices rather than being used with any purpose or consistency. The occasionally engaging action-adventure sequence, such as an encounter with a croc and skeletal ostriches, is more of an exception than a rule, but otherwise, the film is almost entirely a hurried chase without much time for any actual storytelling or a chance for any of it to breathe.

Save for charming Australian newcomer Levi Miller as Peter Pan, the kindest compliment to give the other actors is that they are all trying their darndest. Making his flamboyant entrance as central villain Blackbeard in black feathers and a Marie Antoinette wig, Hugh Jackman seems to be having a ball all by himself. He preens and hams as if he were directed to act vaudevillian and keep everyone in a theater mezzanine awake, but unfortunately, his Blackbeard is far more shrill and overbearing than sinister or even amusing. Tying for most mugging with Jackman is Garrett Hedlund. As fedora-wearing James Hook, Hedlund overexaggerates every facial muscle and acts with his teeth to the point of channelling Heath Ledger's Joker without the smeared clown make-up or fearless brilliance of that performance. It's as cringe-inducing and head-scratching as it sounds. Rooney Mara should bear little blame, but she is distractingly miscast as Princess Tiger Lily. Presented as the only Caucasian in her Native American tribe, the fair, rosy-cheeked actress stands out like a sore thumb, particularly when wearing a candy-colored headdress that looks like it will throw off her balance. Aside from having to play the storybook character as a strong female warrior (i.e. she swings a sword around) and a potential love interest for Hook, it's hard to get much of a reading on Mara's bland portrayal.

Younger viewers will probably get caught up in the adventure solely for the colors and fast pace or ask a lot of questions that parents probably won't be able to answer. For everyone else, "Pan" is jovial and daring enough when it goes a little bonkers—the early scenes in Neverland with Blackbeard yelling down to the lost boys in a canyon resemble "Mad Max: Fury Road," and natives die in colorful puffs of smoke when they're shot—but no matter how idiosyncratic any of the touches are, none of them really warrant an "origin story," or at least this film's treatment of one. This is a garish, cacophonous locomotion of eye candy without tweaking the story in any genuinely interesting way. All "Pan" does is bring comparison to other tellings, and it's no contest to the predecessors.