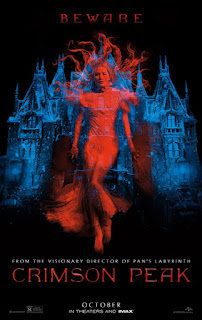 A grinningly spooky, grandly mounted gothic horror-romance, "Crimson Peak" is director Guillermo del Toro's (2013's "Pacific Rim") fondly realized throwback to Edgar Allan Poe's literary works, "Jane Eyre," Alfred Hitchcock's "Rebecca" (1940), the Hammer Horror films of the 1950s and '60s, Jack Clayton's "The Innocents" (1961), and Robert Wise's "The Haunting" (1963). Appreciably R-rated but more sophisticated than gory, the film is gloriously overripe by design and, unsurprisingly, such an impeccably crafted feast for the eyes that it makes one wish they regularly made horror movies like they used to in this old-school vein. Del Toro takes the creaky old bones of a lurid macabre tale set in a haunted house and makes them strong again where, as clichéd as it sounds, the house is certainly a character unto itself.

"Ghosts are real. This much I know," begins Edith Cushing (Mia Wasikowska), who lost her mother at 10 years old and thereafter saw her mother's ghost who warned Edith, "Beware of Crimson Peak." Such impending danger would not become clear until fourteen years later in Buffalo, New York. Being a young woman in the late-19th century, Edith aspires to be a writer and have her manuscript published, but it is dismissed as a mere ghost story. Not long after the aristocratic Thomas Sharpe (Tom Hiddleston), a baronet from England, arrives into town with his cold sister Lucille (Jessica Chastain), looking for an investment in his clay mining machine, Edith's beloved father (Jim Beavers) meets a gruesome demise that affectionate Dr. Alan McMichael (Charlie Hunnam) has his suspicions about. Being the last of her family, Edith marries Thomas, who moves her to Allerdale Hall, a sizable and ornate but damp and decayed estate in Cumberland country that the siblings have been left by their parents. There, the newlyweds, along with Lucille who carries a chain of every key to every door in the home and serves her new sister-in-law a cup of bitter tea each day, nestle in. Sooner or later, Edith will realize the severity of her ghostly mother's warning.

"Crimson Peak," a title which refers to the red clay oozing from the bowels of the property and turning the snow red, begins with a creepy prologue and delivers the kind of screechy, unrestrained scares one will be expecting. Then, writer-director Guillermo del Toro and co-writer Matthew Robbins (1997's "Mimic") take their time with the story, tipping their hand early that Thomas and Lucille are up to no good but keeping their sinister intentions shrouded in enough mystery. As Edith says early on about her manuscript, itself not a ghost story but a story with ghosts in it, the film sees that difference through. The ghosts here are both metaphors for the tragic past and literal when they're haunting and warning Edith, but by then, it's too late. The design of the moaning, crimson-red skeletal apparitions are, as only del Toro can achieve, grotesque yet arrestingly beautiful, even with the apparent use of CGI (one of them is actually played by Doug Jones, who's always called upon to go under heavy make-up and prosthetics to bring otherworldly creatures to life).

The exquisitely cast actors make the most of a classical soap opera, led by Mia Wasikowska as Edith, a protofeminist heroine who's independent-minded, strong-willed and sharp enough to eventually pick up on the bread crumbs. Tom Hiddleston could easily be pigeonholed as Marvel's intoxicatingly evil villain Loki, but here, as Thomas Sharpe, he transcends one's expectations of the character with a little sympathy, as he might actually love Edith. Charlie Hunnam's (who previously worked with the director on "Pacific Rim") purpose as fourth wheel Dr. Alan McMichael is obvious, but he plays the part well with a low-key nobility. Above everyone else, though, Jessica Chastain is deliciously in rare form, not only from now starring in her second horror film (the first being 2013's Guillermo del Toro-produced "Mama") but getting the chance to sink her teeth into a spitefully juicy Lady Macbeth-ish part without driving it into camp. As Lucille Sharpe, pitiful malice incarnate, she finds unnerving menace and subtle humor in the way she just scrapes a spoon against a china bowl when feeding Edith or feeds a butterfly to an army of ravenous ants.

Thomas E. Sanders' lush production design, Brandt Gordon's equaled art direction, Kate Hawley's sumptuous costumes, and Dan Laustsen's fluid, atmospheric cinematography steal the show out from underneath the film's stars. Allerdale Hall, or Crimson Peak as its real name, is an opulent sight to behold in every detail, from leaves and snow falling through the unfixed roof of the foyer to blood-red clay oozing out from the loose floorboards to the old Victorian bathtubs that may or may not have been a murder scene. The story is about as old as any horror movie when characters would walk through dark corridors in puffy-shouldered nightgowns with a candelabra in hand. As Edith discovers an avalanche of deadly secrets that pull open the curtain to what the Sharpes are up to, the viewer is already a few steps ahead, but Guillermo del Toro's patient reveals help with suspense without frustrating too much. Before Edith even gets to Crimson Peak, there is a sly moment of misdirection with a razor on a bathroom sink, but the climactic moments set at the Sharpes' homestead are really sensational, del Toro staging a wickedly violent and wonderfully overwrought Grand Guignol strewn with plenty of crimson. In a film such as "Crimson Peak," it is easy to gush about the stylish, grandiose production values more so than the emotional content, which is slight by comparison. Still, this is a visually mouth-watering retro homage that doesn't feel hollow and feels exactly like the kind of film del Toro has been dying to make.