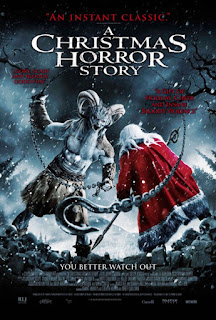 Finding horror in the sacred holiday of Jesus Christ's birthday, "A Christmas Horror Story" is a humorously twisted, sometimes determinedly campy Canadian horror anthology that won't be a gift that keeps on giving. It is only a notch above terrible, and that's unfortunate, given the efforts of three directors (Grant Harvey, Steven Hoban, and Brett Sullivan) and five writers (James Kee, Sarah Larsen, Doug Taylor, and Pascal Trottier). A very mixed stocking with four stuffers, this dud vaguely connects its four simultaneously told tales, all set on Christmas Eve in the town of Bailey Downs (the fictional Canadian town from teen-werewolf gem "Ginger Snaps"), and includes a wraparound with a slumming William Shatner as spiritedly booze-swigging deejay "Dangerous Dan" yakking on the radio. Ultimately, "A Christmas Horror Story" belongs on a certain list, and it's not a nice one.

The film begins on the North Pole, where Santa Claus (George Buza) experiences the death of one of his elves before the rest of them become infected with a flesh-eating contagion. There's plenty of frenzied carnage and stabbings with Santa's staff, none of which is as imaginatively wacky as the wild closing twist. The weakest tale involves three teens (Zoé De Grand Maison, Alex Ozerov, Shannon Kook) sneaking into the basement of St. Joseph's Academy where two students were killed one year ago. It has some eerie ideas around some predictably timed jolts, but the story peters out too quickly and happens to be the least overtly Christmassy. The next vignette involves a black-hearted rich family getting dragged to the patriarch's old aunt's home to steal an inheritance, but the cracking of a Krampus ornament later leaves the family stranded on the side of a snow-covered road and running for their lives from the real Krampus. This thread might be the most satisfying in how it all culminates with a wicked punchline, but it deserved its own standalone treatment rather than being part of an uneven omnibus. Lastly, parents (Adrian Holmes, Oluniké Adeliyi) trespass into the woods to find the perfect Christmas tree. After their asthmatic son (Orion John) goes missing, they find him in a hollowed-out tree, but it isn't their son. This "changeling" story might have the most legitimately creepy story to tell, but like all of the stories, the crisscrossing structure botches the goods.

In theory, "A Christmas Horror Story" has all of the makings of a Christmas-loving horror fan's dream movie, but the reality misses the mark in nearly every way. Instead of each story unfolding on its own time, the editorial choice to intercut back and forth between all four stories is a frustratingly mismanaged one, as none of the stories are able to work up much momentum when it's off to the next. The production values are direct-to-video-level cheap and style-free, and the music score is equally low-rent. Both the horror and comedy elements mostly fall flat. This schlock is too hokey within its low-budget limitations to actually hate, but it's also not that well-made to ever scare or divert enough. It's lame, lurching, and exceedingly mediocre when it should have been scary and more fun. The good news is that "A Christmas Horror Story" just makes one even more excited to hold out a couple more months for "Trick 'r Treat" director Michael Dougherty's "Krampus" instead.