Deck the Coopers: Talented cast wrapped up and wasted in schmaltzy "Love the Coopers" 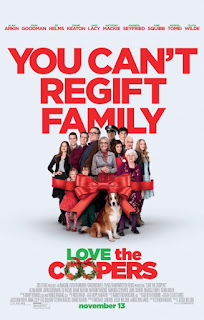 Ah, the holidays. That can only mean one thing: it's that time of year for a family Christmas multiplex event that comes gift-wrapped with an all-star cast but, as a general rule, results in a cinematic fruitcake nobody wants to claim. Compared to the painfully tone-deaf trifecta of 2004's "Surviving Christmas" and "Christmas with the Kranks," and 2006's "Deck the Halls," "Love the Coopers" is more harmlessly forgettable than aggressively terrible and even a little less wacky and sitcommy than the advertisements make it out to be. However, in the sweepstakes of sorely underrated family holiday dramedies that include 1995's "Home for the Holidays" and 2005's "The Family Stone," this clunker desperately wants audiences to fall in love with the characters on screen—notice how the movie's title is more of a command without a comma and less of a card signature—and nobody likes to be told how to feel, right? Despite a voluminous cast of appealing faces in one movie, the film is about as tonally cohesive and emotionally true as one of Garry Marshall's starry, multi-story extravaganzas or those phony, cringe-worthy original movies that play on a loop months before the actual holiday on the Hallmark Channel. The film earns most of its bright spots from just watching the ensemble on display, but if they were interacting with stronger material, "Love the Coopers" might not have seemed like such a waste of talent.

With their forty years of marriage running its course, Charlotte (Diane Keaton) and Sam Cooper (John Goodman) have lost track of what made them fall in love, but they're ready to have their family together at home in Pittsburgh for Christmas Eve. It's their one last shot at a Perfect Christmas before breaking the news to their two adult children. Their son, recently unemployed family photographer Hank (Ed Helms), and his screechy wife, Angie (Alex Borstein), are in the midst of a divorce, which is hard on their two sons (Timothée Chalamet, Maxwell Simkins) but not so much for their bad-word-spouting daughter (Blake Baumgartner). Meanwhile, the Coopers' daughter Eleanor (Olivia Wilde), a cynical playwright, has already landed in town, but with trepidation about returning home and disappointing her mother, she kills time in the airport where she meets conservative Army soldier Joe (Jake Lacy), who will be deployed on Christmas day, and talks him into playing her boyfriend for the night. Somewhere else in the snowy steel city, Charlotte's younger sister Emma (Marisa Tomei) is feeling sorry for herself while Christmas shopping and decides to shoplift an expensive piece of jewelry inside her mouth before being arrested by no-nonsense Officer Percy Williams (Anthony Mackie), whom Emma tries to psychoanalyze in his cop car. Also, toss in waitress Ruby (Amanda Seyfried) whose last day at a local diner makes favorite customer Bucky (Alan Arkin), Charlotte and Emma's father, rather distraught; Hank's awkward teenage son dealing with young romance when he's supposed to be watching his younger brother Bo; and Sam's wacky Aunt Fishy (June Squibb) whose dementia can't even ruin her cheerful spirit. Who are these people and why do they even bother celebrating Christmas together?

About as uneven as a film can get, "Love the Coopers" is a hectic mess, so filled to the gills with undefined characters and underdeveloped subplots and story threads that are either allotted too much screen time or not enough. Director Jessie Nelson (2001's "I Am Sam") probably had so much fun working with her cast instead of realizing that Steven Rogers' screenplay (whose writing credits include "Stepmom" and "P.S. I Love You") could have withstood numerous nips and tucks before heading into production, not that her direction is well-advised in every case, either. For every nice moment, sharp line reading, and nugget of bittersweet truth, there are major steps back. Such moments either don't last or are trampled on by thick sentiment or lame comedic gags that have little place in an already-overstuffed story centered around a wildly dysfunctional family. When director Nelson tries to shoehorn in comedy—either the family dog or the senile aunt breaks wind during a dinner prayer, a teenage boy sloppily tongues his crush as his family stares in horror, and a little girl copies her angry mother and calls everyone a "dick"—it seems at odds with the drama and isn't that funny to begin with. There is also a cornball last-minute race through a hospital where one of the female characters rushes down the hallway, knocks a patient off a gurney, and plows down a parade of people with balloons, just to get to her Mr. Right. And, as all families do when a loved one is in the emergency room, the Coopers too patly put aside their problems and dance away in the hospital cafeteria like it's a reception hall. Finally, the whole Hallmark card of a tale is insistently narrated by Steve Martin, spelling everything out as an omniscient outsider who never shuts up and knows every on-screen character's full names, all of their hang-ups, and histories with one another; once his identity is revealed, it would be darling if it weren't so cloying and nonsensical. 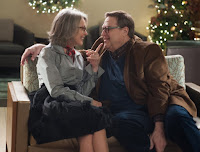 The only marginal pleasure to be had in "Love the Coopers" is being in the company of such an affable ensemble, but once all of the Coopers get together for dinner, the cast members don't even believably gel as a familial unit, just paid actors gathering on set to make a movie. Diane Keaton, whose face is so distractingly soft-focused here, and John Goodman do bring degrees of recognizably human emotion to their parts as a long-married couple who have lost track of one another, but when the main sticking point for their drifting apart comes down to a canceled vacation to Africa, one can't help but roll his or her eyes at these Rich, White People Problems. A beautiful, adeptly sardonic Olivia Wilde and a charming Jake Lacy (2014's "Obvious Child") have an engaging, even smartly written interplay in the airport. If the focus wasn't frequently pulled off of them, their individual story could have made for a better film as an indie meet-cute romance at feature-length. Of the non-romantic nature between seemingly magical waitress Ruby and the wise, much-older Bucky, Amanda Seyfried has some sweet moments with Alan Arkin, who only has to show up and be his Arkin-y self. Then again, how the script forces Ruby into the Coopers' household for Christmas Eve dinner and doesn't even give her a single conversation with anyone else is beyond contrived, and her coupling with another character is just inscrutable. Everyone else fares less well. Ed Helms snorts a lot and feels bad for himself as the hapless Hank, and what exactly is Marisa Tomei doing here? She plays daffy just fine, but the script doesn't help her out, as there is no clear sense of who Emma is as a character. When she opens up a little to Anthony Mackie's closeted, "robotic" cop, Emma is still a question mark, and the script also woefully doesn't do enough with Mackie. After finally being recognized and earning an Oscar nomination for her acerbic, nuanced character work in 2013's "Nebraska," the adorable June Squibb can do this sort of dotty shtick in her sleep, but she's so much funnier than the role of Aunt Fishy that uses her as a punchline. 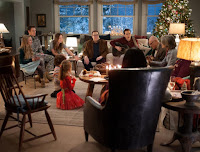 Workably pleasant here and there, "Love the Coopers" is still too blandly schmaltzy and irritatingly assembled to be a Yuletide keeper. Beyond the comfort of seeing so many people you like in one movie, director Jessie Nelson tries adding some whimsical flourishes—a flashback of a heartbroken Eleanor finding her ex kissing another woman has her turning into an ice sculpture that literally breaks—that are half-heartedly used but at least zest up the antsy rush job of Elliot Davis' cinematography. Traditional seasonal classics on the soundtrack also brighten the mood and Nelson wisely shot the production in Pittsburgh, so there is actual snow (its absence or fake substitute has always been a major faux pas committed by the worst Christmas movies). As everything shakes out in the end, this is the kind of film you consistently battle with, hoping and trying to like it instead of genuinely liking it. With the title of the movie already setting itself up way too easily for a joke, it's a bit of a forgone conclusion to say that the Coopers don't deserve much of any love. Revisit the Griswolds this year instead.