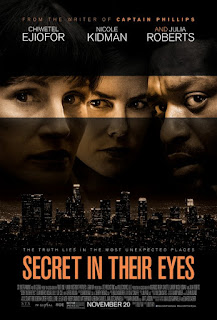 An English-language interpretation of 2010's Argentinean film "The Secret in Their Eyes (El Secreto de Sus Ojos)," which won an Oscar for Best Foreign Language Film, "Secret in Their Eyes" is a workmanlike, finely acted procedural thriller that plays well enough on its own. The film has a little more thematic depth than a standard-issue "Law & Order" episode, but it also could have dug deeper to feel as powerful as it clearly wants to be. Comparing this stateside version with the foreign import will just be a disservice to what writer-director Billy Ray ("Shattered Glass," "Breach") does get right with his first-rate cast, giving potentially sensationalistic material a relative measure of class and intelligence, and thus validates existence as more than just an unnecessary, watered-down Americanization. It's far better than 1993's star-studded "The Vanishing," a slick but inferior remake of the disquieting 1988 Dutch thriller, and 1996's laughably trashy "Diabolique" remake of 1955's untouchable "Les Diaboliques."

In post-9/11 2002, Los Angeles FBI agent Ray Kasten (Chiwetel Ejiofor) and investigator Jess Cobb (Julia Roberts) are part of a counter-terrorism task force, keeping tabs on a mosque. When they rush to a crime scene with a young woman's body soaked in bleach and dumped in a dumpster next to the mosque, the body turns out to be Jess' college-aged daughter Carolyn (Zoe Graham). Jess is devastated and takes time to grieve, while Ray remains deeply invested in the case and tries to not distract himself with his flirtatious relationship with assistant District of Attorney Claire Sloan (Nicole Kidman), a Harvard-educated woman from Philly. He stumbles upon some clues that lead to a chief suspect in a Russian creep, Marzin (Joe Cole), who also happens to be protected by the FBI as a source. In the thirteen-year interim, Ray now resides in New York and does security for the Mets, but hasn't been able to put the case to rest. When he thinks he's finally found the man who killed Jess' daughter and got away without any evidence to hold him, he makes an urgent trip to L.A. to see his former colleagues and asks Claire to reopen the unresolved case after all these years.

Very loosely based on Juan José Campanella's 2010 film of (minus the article "the") the same name, itself based on a 2005 novel, "Secret in Their Eyes" transplants the setting from Buenos Aires to Los Angeles with a high-alert post-9/11 backdrop and makes the gender switch from male to female (Julia Roberts), as well as the relationship with the murder victim (a daughter, not a wife). Writer-director Billy Ray pulls double-duty, skipping back and forth from 2015 to 2002, and it certainly helps that Chiwetel Ejiofer's hair grays and Julia Roberts' hair is up during the present-day scenes and down in the past scenes. With the cold case being presented in piecemeal fashion, it's a testament to Ray that the film remains reasonably involving. He also replicates a single unbroken shot from the original film's sequence at a soccer stadium; this time, it's set at Dodgers Stadium and impressively shot by cinematographer Daniel Moder (Roberts' husband), as Ray and fellow detective "Bumpy" (Dean Norris) pick out the suspect out of the crowded stands and give him a chase.

Chiwetel Ejiofer intensely gives his all as Ray, making his obsession with the case and friendship with Roberts' Jess more believable than his spoken but unfulfilled relationship with Nicole Kidman's Claire. Kidman is reliably strong, too, her hair always on point, and she shares a juicy good cop/bad cop scene when they interrogate their prime suspect, but the scene before that where her blouse comes undone when Ray grabs her is beyond clumsy. An unglammed Julia Roberts is the most effective, bringing pain and rage to a broken shell of a woman, but it's not a shameless Oscar-grab performance, even as the usually all-smiles actress is game to look haggard and a "million years old." As Jess, she makes the discovery of her daughter's body tough and palpably wrenching, and luckily, there are a few flashback scenes to establish the charming personality of Zoe Graham's Carolyn, making her murder that much more devastating. The trio is also supported by Dean Norris and Michael Kelly, respectively playing law enforcement officers "Bumpy" Willis and Reg Siefert; Joe Cole, an unnerving standout as Russian informant and chief suspect Marzin; and Alfred Molina as D.A. Morales.

Sometimes too convenient in its plotting but still able to surprise in its double reveal (some viewers might see it coming faster than this one did), "Secret in Their Eyes" feels like a mystery suspense-thriller from the 1990s. It's distinguished most substantially by its A-list cast and a skillfully handled nonlinear structure that will only confuse those who refuse to pay attention. Even if the unrequited relationship between Ray and Claire never develops beyond shallow waters, the characters are at least treated with an adult understanding instead of just making goo-goo eyes at one another. With such inherent drama in the subject matter, "Secret in Their Eyes" isn't quite a knockout, but it is a worthwhile drama that will pop more on the small screen and make all the world of difference with eminently watchable thespians acting the hell out of it.