The Power of the Press: "Spotlight" shines with exceptional ensemble and solid writing 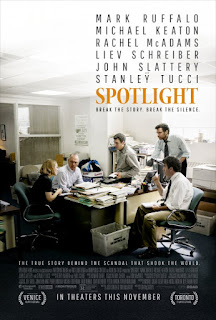 For a film that ought to sound dry and staid with journalists poring over documents and looking through archives, "Spotlight" is a fact-based procedural that can't help but be compelling. The film, set in 2001 and 2002, follows The Boston Globe’s investigative “Spotlight” team and their coverage of the Massachusetts Catholic sex abuse scandal (for which the paper won the 2003 Pulitzer Prize for Public Service). It's a necessary piece of journalism about the process of digging deep and searching for the truth in an unsavory story about such a monumentally faith-based institution as the Catholic Church. Proving to have a knack for observational, character-based slice-of-life dramas ("The Station Agent," "The Visitor," "Win Win"), writer-director Thomas McCarthy (making a great rebound the same year after an "oops" with the Adam Sandler-starrer “The Cobbler”) makes a film that is less about its individual characters, who all still feel like human beings and not just types, and more about them as a team. It's straightforward, but the script by McCarthy and co-writer Josh Singer (2013’s “The Fifth Estate”) is efficient and carefully researched yet wordy and never dense, and the ensemble couldn't be better.

Formerly of the Miami Herald and arriving at The Boston Globe in 2001, new editor-in-chief Marty Baron (Liev Schreiber), who calls himself a "player coach," finds a column about a local priest being accused of molestation and wonders if there's a story there. He puts editor Walter 'Robby' Robinson (Michael Keaton, back to the newsroom after 1994's "The Paper") and his "Spotlight" staff of investigative journalists—Michael Resends (Mark Ruffalo), Sacha Pfeiffer (Rachel McAdams), and Matt Carroll (Brian d'Arcy James)—on the story and report back to managing editor Ben Bradlee Jr. (John Slattery). The team’s findings show that several priests who had child molestation charges brought against them in the Boston area were moved to other parishes, the number of thirteen local priests rising to ninety, and then the abusive incidents were covered up by the Boston Archdiocese - Cardinal Bernard Law. They interview molested survivors, now adult men and meet with attorney Mitchell Garabedian (Stanley Tucci), who has been quietly bringing forth 84 cases against these pedophilic priests, as well as Eric Macleish (Billy Crudup), who has made deals with the church. After devoting to the story, even after the 9/11 terrorist attacks put everything on hold, the reporters' work would eventually pay off and encourage even more victims to come to light.

A hard-hitting procedural and human-interest drama that has rightfully earned comparison to 1976's "All the President's Men," “Spotlight” boasts urgency in piecing together information and a limited scope that proves to be useful in keeping the story tightly focused. The reporters are never canonized, though the integrity they have to complete the story and seek justice is heroic, and the Catholic Church is never overly demonized. One low-key but alarming scene has Sacha knocking on the door of an accused priest who admits to the charges nonchalantly before his angry sister shuts the door on the reporter. There is also a startling discovery by Robby at his alma mater. What the viewer won't get is too much time dedicated to the characters' personal lives outside of their jobs: Michael speaks of having a wife, but he lives in a small, spare one-bedroom apartment by himself; Sacha has a husband and goes to church with her grandmother before she gets too invested in the story; and Matt does a family that is never seen. The film’s emotional core really aligns with the survivors of the molestations. “How do you say ‘no’ to God?” asks one of the now-adult victims. Without there being one central protagonist, director Thomas McCarthy's film is a true ensemble piece, and his cast is terrific across the board. They all handle the all-business nature of their roles as a solid unit with understated authenticity. Save for Mark Ruffalo's dogged Michael Resends, no one has a big, showy, or forceful moment. The lesser-known actors playing the victims also make a lasting impression.

From a cinematic perspective, the film is sufficiently well-made but mostly utilitarian, unlike David Fincher's masterpiece "Zodiac," and it's an approach that suits the material. A single tracking shot of Matt Carroll walking down the street to find a "treatment center," a house of clergies, only a block away from his own home shows at least a smidgen of visual flourish. Outside of Boston locations in working-class neighborhoods, the film mostly takes place within interior spaces—the Globe newsroom, the subterranean "Spotlight" office and courtrooms—and captures the insularity of the city, another choice that makes sense given the controversial takedown of the Catholic Church. A film that at least doesn't try to sensationalize anything or oversell itself with Oscar-bait importance, "Spotlight" isn't the grandstanding powerhouse it could be, but, like the team of shoe-leather reporters, it does the work and does its job very well. It is going to be catnip for real-life journalists more so than the average viewer, but still, this is solid, mature filmmaking about journalism that seems to get that line of work right and should be seen.