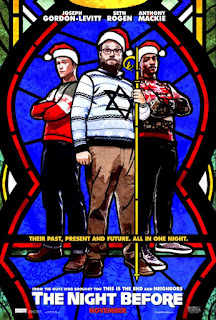 Director Jonathan Levine's last film with Seth Rogen and Joseph Gordon-Levitt was 2011's "50/50," a dramedy about a twentysomething's response to cancer, and it actually contains more laughs than their one-crazy-night Christmas romp "The Night Before." It at least has all of the cinematic conventions for that wonderful time of year: cheery Christmas jingles, Christmas sweaters, twinkle lights, mistletoe — and weed, shrooms and cocaine? Writer-director Levine ("Warm Bodies") and screenwriters Kyle Hunter & Ariel Shaffir & Evan Goldberg ("The Interview," "This Is the End") set out to kick out the jams and make a merrily debaucherous R-rated comedy during the holidays, and while such a concept is always welcome when so many Christmas movies pour on the trumped-up sentiment, almost every joke of theirs is ho-hum, as if raunchy automatically makes it hilarious. A bender of jokes of the penile, vomitory, and psychotropic variety run rampant, but very few of them are actually funny.

On Christmas Eve of 2001, Ethan (Joseph Gordon-Levitt) lost his parents, but his two best buddies, Isaac (Seth Rogen) and Chris (Anthony Mackie), pulled him out of his funk and have started a tradition in Manhattan. Fourteen years later and now a struggling 33-year-old musician, Ethan has been broken up for three months with girlfriend Diana (Lizzy Caplan) for not committing. Jewish lawyer Isaac is a father-to-be, terrified of that responsibility, and Chris is super-famous as a pro football star who uses steroids, advertises every second of his life on social media, and rides around in a Red Bull-sponsored limo. Since 2008, Ethan has always wanted to attend a big, invitation-only Christmas Eve bash called the Nutcracka Ball, so this year, he steals three tickets and hopes to go all out with his best friends. For his one last hurrah before becoming a father, Isaac's pregnant wife Betsy (Jillian Bell) gives her husband a gift box of hard narcotics and encourages him to live it up for the night. Leading up to the time of the Nutcracka Ball, all three men make their traditional pit stops before running into many mishaps along the way and making for one unforgettable night.

So very proudly rude and unapologetically crude, "The Night Before" is never as funny as it needs to be and never as outrageously shocking as it wants to be. It also tries to work on the level of an affecting coming-of-adulthood drama, and while Joseph Gordon-Levitt can bring weight and substance to anything, it had better luck at just being a rollicking comedy. The premise is as dopey as can be, and as the plot requires, it becomes an episodic chain of misadventures for Ethan, Isaac and Chris. There are a few stray laughs sprinkled throughout but none of the comedic set-pieces match their potential or hit the comic high they should. In a bit that calls back to "Die Hard's" Hans Gruber and the "Sticky Bandits" in the "Home Alone" movies, Chris gets played by a stealthy, homeless grinch (Ilana Glazer of Comedy Central's "Broad City") who purports to be a super-fan, but there's not much of a follow-through. A bit where Ethan picks a fight with two Bad Santas (Jason Mantzoukas, Jason Jones), drunk off their asses and peeing on the side of the street, falls ever so flat. Some of the hallucinogenic humor isn't always as inspired as it has been in other mainstream comedies, most of which star Rogen, but through all of that chemically enhanced lunacy, Isaac talking to "Spencer and his family" around a Nativity Scene outside of a church is quite funny. When Isaac (who's wearing a Star of David sweater) gets roped into attending Midnight Mass with a mortified Betsy and her family, he ends up hallucinating and throwing up in the aisle of the pews; it's almost blasphemous enough to make one crack a smile, but the payoff is painfully cringe-inducing. Oddly enough, the two high points in the entire film are musical moments. Early on, the three friends reimagine the FAO Schwarz scene in the Tom Hanks classic "Big," this time with Gordon-Levitt, Rogen, and Mackie covering Kanye West's "Runaway" instead of "Chopsticks" on a walking piano. Then, by the climax, Miley Cyrus' "Wrecking Ball" comes into play.

Because of who they are and their commitment to take the material seriously while still doing just about anything for a laugh, Joseph Gordon-Levitt, Seth Rogen, and Anthony Mackie help make the 101 minutes sporadically enjoyable enough to get through. As the orphaned Ethan, Gordon-Levitt is having a good time but also finds the time to make his character arc feel deserved and gets to share it with Lizzy Caplan, here as Ethan's ex Diana, who's always an appealing sight for sore eyes. Rogen is his likable stoned-Fozzie-Bear self as Isaac, who uses his box full of drugs as a buffer for adult responsibility. After "Neighbors," where he played a husband and father who wanted his freedom back, he's playing a husband and expectant father who's terrified of getting older, so at least there's some mature progression in his stoned shtick. Mackie is charismatic as all get-out as the slightly cocky but good-hearted Chris, but he's not nearly given enough business like his co-stars. The women in the cast also fare better than most: Jillian Bell (2014's "22 Jump Street") can't help but be a firecracker and hijack all of her scenes as Betsy, Isaac's understanding-if-you-don't-get-her-mad wife; Mindy Kaling makes the most of dumb, predictable plotting with her ace comic timing as Sarah, Diana's naughty friend who accidentally switches phones with Isaac after he bleeds in her drink (don't ask); and Lorraine Toussaint (2014's "Selma") has one of the loveliest moments in the film as Chris' loving mother, telling the boys the true meaning of Christmas. The who's-who cast of comedians also features an obligatory cameo from someone in Rogen's posse, but even better is a typically weird and unpredictable Michael Shannon. He plays Mr. Green, the same drug dealer the guys used to buy from in high school and a sort-of magical Ghost of Christmas Past, Present and Future, and pokes fun at his "quiet intensity that makes people uncomfortable" and drops a line about "The Great Gatsby" that's a hoot.

Opening with a rhythmic Christmas storybook narration by Tracy Morgan and decked out in twinkly holiday iconography, complete with "Dance of the Sugar Plum Fairy" and "Christmas (Baby Please Come Home)" on the soundtrack, "The Night Before" will no doubt get one into the Christmas spirit, if anything, but that still doesn't change one's wish that the film were funnier. How comedy hits and misses not only comes down to a matter of taste but on how it's executed—in this reviewer's honest opinion, this year's "Vacation" reveled in crude humor but found a way to make it frequently funny—and "The Night Before" is just too scattershot and not always sharp enough to earn the kind of laughs it wants to smoke up. Christmas movie and buddy comedy completists may feel more forgiving, and it may play better to those drunk on eggnog and high on every mind-altering substance. You want drugs with your magic-in-the-air Christmas spirit? Hit up 2011's "A Very Harold & Kumar 3D Christmas."