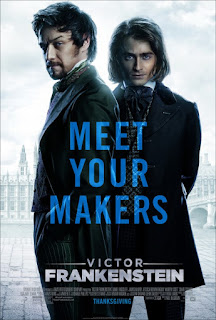 As far as the cinematic adaptations of Mary Shelley's "Frankenstein" go, 1931's classic Colin Clive-Boris Karloff-starrer "Frankenstein" is the benchmark; 1994's Kenneth Branagh-directed "Mary Shelley's Frankenstein" is a bombastic if not uninteresting mess; and 2014's empty, self-serious "I, Frankenstein" shouldn't even be listed in the same sentence. "Victor Frankenstein" fits into a different category; it's neither fish nor fowl. It's mildly ambitious but not very successful, and it's moderately well-made but mostly dull. Directed by Paul McGuigan ("Push," "Lucky Number Slevin") and written by Max Landis ("American Ultra," "Chronicle"), this retelling tries to be a few different things without committing or being a good example of any of them.

Daniel Radcliffe stars as a nameless hunchback who suffers the daily cruelties as a circus clown. Something of an autodidactic physician, he studies anatomy when he's not being the butt of every performance and pining for beautiful trapeze artist Lorelei (Jessica Brown Findlay). Everything about the hunchbacked clown's life changes the night Royal College of Medicine student Victor Frankenstein (James McAvoy) comes to the circus. When accident strikes for Lorelei, falling from great heights during her acrobatic act, the circus outcast acts quickly and impresses Victor by knowing just how to reset the woman's collarbone and save her from paralysis. Whisked away from his awful sideshow life, having the fluid drained out of the abscess on his back, and named after Victor's mysteriously vanished flatmate, the newly named Igor is made into the med student's lab assistant and a handsome gentleman. As Victor and Igor begin making a breakthrough of changing the natural order by reanimating a chimpanzee with some stolen body parts and volts of electricity, they are both wanted for an alleged murder at the circus, while dauntless Scotland Yard constable and religious zealot Roderick Turpin (Andrew Scott) is hot on their trail. Victor also has a high-society classmate named Finnegan (Freddie Fox), who wants to steal Victor's research.

"Victor Frankenstein"—wouldn't "Igor" be the less misleading and more correct title?—intends to offer a fresh and interesting revisionist angle. There's another story here, but the one that has made it to the screen is neither fresh nor that interesting. Its first mistake is the first line of Daniel Radcliffe's opening voice-over narration: "You know this story." Then, why are you telling it? The film then proceeds to upturn expectations slightly by deviating from the source material and telling the derivative tale from the perspective of Frankenstein's hunchback assistant (who never existed in Mary Shelley's novel and was known as "Fritz" in the 1931 film). Director Paul McGuigan gives the film some visual style in the form of X-ray imagery and moments of ickiness that might have been better served in an R-rated movie. Screenwriter Max Landis (whose father John made 1981's "An American Werewolf in London," a much better man-vs.-monster film) sneaks in a few homages. There's the amusing mispronunciation of Frankenstein's name, as a tip of the hat to Mel Brooks' "Young Frankenstein," and the barest of cleverness in the mention of Victor's late brother being named Henry (the former doctor in the 1931 film) and the world remembering the man over the monster, like the cultural misconception that Frankenstein is the resurrected monster rather than the scientist who invents him. Also, like in Shelley's original story, Frankenstein's monster parallels Prometheus, the mythic Greek titan who created mankind.

The wait to the lightning-cracking climax of Frankenstein's iconic monster is a long time coming. An escape sequence at the circus reminds of a less exciting sequence from one of Guy Ritchie's "Sherlock Holmes" movies, complete with derring-do captured in slo-mo. On a technical level, the film is aided by CG-enhancements to bring Victorian-era London to life, but only do Victor Frankenstein's laboratory and the Scottish castle setting for the big finish lend much Gothic atmosphere. A scenery-chewing James McAvoy is at least ideal casting to play Victor Frankenstein, sporting a gleefully unhinged twinkle in his eye and providing the film with much-needed gusto. He gets to bare his teeth and spit like a rabid dog, as if to keep the film alive. As Igor, the boyish Daniel Radcliffe seems a little miscast when he's first seen with clown make-up and hunching his back, but once he cleans up, he brings a soulfulness to the sidekick role that has always been stripped of character and just relegated to a freak. His dynamic with McAvoy is diverting enough that there was no need for a steamy-as-a-wet-matchbook romance with the radiant Jessica Brown Findlay with whom he shares zero chemistry. What could have sewn its tongue into its cheek or gone all out as a Grand Guignol, all that's left of "Victor Frankenstein" are feelings of missed opportunities for a regeneration. It warranted no reason for a twentieth life.