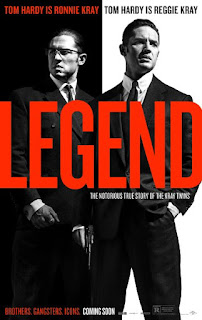 A gangster crime picture with one Tom Hardy, who's been shaping himself to be as versatile of a thespian as well as close to a dead ringer as Marlon Brando, is enough of a can't-miss proposition, so imagine multiplying Hardy by two. In "Legend," set in London during the 1950s and '60s, Hardy plays twin brothers, Reggie Kray and Ronnie Kray, who rose to power as Cockney gangsters. This isn't the first time the Kray brothers were the subject of a film; 1990's "The Krays" starred brothers Gary and Martin Kemp from '80s English new wave band Spandau Ballet. "Legend" might be too generic of a title, and the film is subjectively derivative but never dull, profiting from Hardy's killer performances in dual roles.

Written and directed by Brian Helgeland (2013's "42"), the film is omnisciently narrated from the beginning by Reggie's bride Frances (Emily Browning). A former boxer, Reggie is an East End club owner and a big force in the gangster underground. He's fierce when it comes to business, quietly orchestrating beatdowns away from his guests, but charming enough to start romancing Frances. He pulls a few strings to get his twin brother discharged from a psychiatric prison. Ronnie is a real brute, a paranoid-schizophrenic who openly fancies the company of men. When the brothers partner up with the American mafia (led by who else than Chazz Palminteri), Ronnie isn't so much inclined to play nice. The differences between both Kray brothers will eventually come to a head.

"Legend" is brutish and violent and invariably watchable, but for a potentially fascinating story about criminal twin brothers, the treatment of it occasionally lacks dramatic urgency. A subplot involving a rival gang (led by Paul Bettany) is introduced early on and then abruptly sees itself out. The film doesn't delve too much into either of the brothers' heads, either. Fortunately, Frances is not only our conduit but the film's soul, and the lovely Emily Browning does garner enough sympathy to break the viewer's heart. As directed by Helgeland, the film takes more than a few cues from Martin Scorsese's inimitable "Goodfellas," even borrowing certain camera movements (a tracking shot that follows Reggie and Frances into his club is almost a replica) and using a familiar array of musical selections for the period. It's useless to compare, although his style is more straightforward and never as vital. As a biopic, the film isn't terribly deep, but besides being a summarized version rather than a tell-all exploration of the Kray twins, it is a good example of two lead performances transcending the film they are in.

Above all, "Legend" has one, actually, two things going for it, and they both are Tom Hardy. He gives two distinguishable performances in playing both Reggie and Ronnie, carrying himself in two different ways and using distinct speech patterns. Ronnie is decidedly the showier character, a ferocious loose cannon who blows a gasket more often than not, but one soon forgets it's the great work of one actor. Hardy is great fun to watch, frequently upstaging himself and able to do just about anything at this point, such as making the entire film more entertaining and worthwhile than it should be. 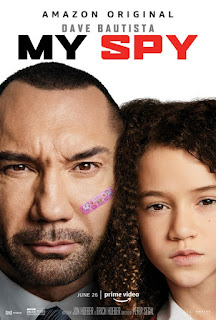