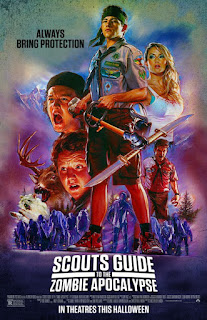 "Superbad" crossed with zombies, "Scouts Guide to the Zombie Apocalypse" received a very abbreviated theatrical run in select cinemas on Halloween, only to be subsequently released on VOD this December. Based on the title, it's the kind of R-rated romp that gives you exactly what you bargain for and will probably find a better home with friends consuming a case of beer on the couch. The script by writer-director Christopher Landon (2014's "Paranormal Activity: The Marked Ones") and screenwriters Carrie Evans & Emi Mochizuki (2008's "College Road Trip") is more juvenile than witty. Aside from having boy scouts use their resourcefulness to their advantage, that angle fails to match its full potential. Despite these demerits, Landon keeps the energy rolling and lets the carnage rip. Indefensibly dopey all the way, "Scouts Guide to the Zombie Apocalypse" is still fun for a few gags and as amiable as a boys-will-be-boys horror comedy with a high T&A quotient and penis jokes can possibly be.

A medical lab janitor (Blake Anderson of Comedy Central's "Workaholics") foolishly disturbing Patient Zero sets off the invasion of a zombie outbreak in a suburban California town. Moving into their junior year of high school, straight-arrow Ben (Tye Sheridan) and ready-to-get-wild Carter (Logan Miller) are thinking of quitting boy scouts. They just have to find the right time to tell enthusiastic friend Augie (Joey Morgan), who's dedicated to earn his Condor badge. The same night the scouts are supposed to have a campout with Augie, Carter eggs on Ben to ditch their best friend and sneak out to a private party for seniors. On their way, though, they discover the town looks deserted, including local strip club Lawrence of Alabia where one of the dancers turns out to be undead. Ben and Carter luckily team up with Denise (Sarah Dumont), a tough, gun-toting "cocktail waitress" at the club, and hope to find the secret address of the party so they can rescue Carter's sister Kendall (Halston Sage) on whom Ben has had a crush.

The sheer likability of the cast helps a great deal. 19-year-old Tye Sheridan is definitely better than the material, considering he started on a high note in his career with "The Tree of Life," "Mud," "Joe" and "The Stanford Prison Experiment," but as the sincere Ben, he knows how to ground the over-the-top nature of everything around him. Logan Miller ("The Stanford Prison Experiment") makes the horny Carter a little less insufferable, and Joey Morgan is actually kind of sweetly endearing as Augie, who uses boy scouts to keep his mind off of his father's death two years ago. Sarah Dumont gets to be little more than male-fantasy eye candy in a tank top and denim cut-offs as leggy strip club worker Denise, but her character oftentimes gets stuff done more readily than the boys. Unfortunately, comic legend Cloris Leachman is on screen long enough to be a mean cat lady neighbor and come back as a zombie, only to be used in a tasteless gag that involves her gums and a teenage boy's derrière.

"Scouts Guide to the Zombie Apocalypse" has nothing on smarter, more inventive twists on the zombie genre, like "Shaun of the Dead" or "Zombieland," but it's not without undemanding entertainment value. Even if most of the jokes are base, like a character nearly falling out of a window and accidentally grabbing a zombified old man's penis or one gross moment that rips off "Re-Animator," other sight gags go underestimated. A mile marker for Haddonfield, California, is a slight but cute little visual in-joke; the bobbing head of a zombie, jumping on a trampoline, appearing outside of a window is actually quite funny; and a wild set-piece involves Augie being chased by the infected Scout Leader Rogers (David Koechner) throughout the uncool, Dolly Parton-obsessed adult's house. There are also zombie deer and cats, and a drunk zombie bum (Drew Droege) who doesn't lose his love for Britney Spears' "…Baby One More Time." Cheerfully ridiculous and not easy to defend, this is a lark that's not going to be a mature grown-up's cup of tea. It's more eager to please a certain audience who has never seen a set of breasts before.