Next-Door Sisters: "Neighbors 2" not as fresh but nearly as smart and funny 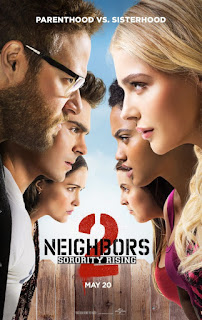 The existence of “Neighbors 2: Sorority Rising,” a sequel to 2014’s frequently funny but also relatable raunchfest “Neighbors,” seemed like a no-brainer. If staging another generational war between married couple Mac (Seth Rogen) and Kelly Radner (Rose Byrne) and a next-door sorority rather than a fraternity sounded like a carbon copy, it might not be as fresh but at least a lesser continuation still knows how to be raunchy and smart with an even more distaff, equal-opportunity spin. Without a socially progressive bent and the all-in enthusiasm of its cast, this sequel wouldn’t be as much fun as it is, but “Neighbors 2: Sorority Rising” is nearly on par with the first one. And, if there’s one rowdy, defiantly R-rated comedy that features Zac Efron and his sculpted torso this year, let it be this lively, palatably bawdy romp and not the embarrassing, unlikable comedic nadir that is “Dirty Grandpa.”

Expecting another baby girl on the way, Mac and Kelly are ready to sell their home and find themselves in escrow for 30 days, so before they can actually close, the interested buyers could back out for any reason. No sooner does the empty Delta Psi Beta fraternity house next door become occupied by the girls of Kappa Nu when rebellious, long-to-be-cool freshmen Shelby (Chloë Grace Moretz) and her two new college friends, Beth (Kiersey Clemons) and Nora (Beanie Feldstein), stop rushing a sorority to start their own. The girls are sick and tired of attending frat parties just because sororities aren't able to throw any and have as much crazy fun as the guys can. Meanwhile, alpha-male Teddy Sanders (Zac Efron) is having a quarter-life crisis, having to wear a shirt now at Abercrombie & Fitch and watching his closest frat bros advance in their careers. His roommate and best friend, Pete (Dave Franco), is about to tie the knot to boyfriend Darren (John Early) and asks Teddy to move out. With nowhere else to turn, Teddy decides to help the sisters stand their ground against the Radners, who politely ask the girls to not party for a month, but he might be open to switching sides when war breaks out between the “old people” and Kappa Nu.

Opening with a morning-sickness gag that may be less outrageous than it is desperate and unreassuring, “Neighbors 2: Sorority Rising” luckily gets to the next laugh pretty quickly and has something to say within its three-tier narrative. Writer-director Nicholas Stoller and writers Andrew J. Cohen & Brendan O’Brien & Seth Rogen & Evan Goldberg still manage to make their characters likable, even when their actions are unlikable. All of them have understandable goals: Mac and Kelly want their house sold without any problems; Shelby, Beth and Nora can’t afford their sorority house, so they must throw rush events to raise money; and Teddy is a lost soul who’s trying to find his purpose. Underneath the oh-so-wrong jokes of a two-year-old playing with a vibrator and sorority girls throwing used tampons at the Radners’ windows, the film still incorporates the grappling of adult responsibility from the point-of-view of Teddy, who’s now considered old, while Mac and Kelly need a little reassurance that they're going to be good parents of two children. The new wrinkle here is the sexism and double standards in a college campus' Greek system and Shelby and her friends’ protesting against it by establishing the first sorority that can rage. There's even a feminist icon costume party where the sisters dress up as Oprah, Hillary Clinton and Joan of Arc. Instead of spelling out a preachy, heavy-handed statement, the writers find smart, articulate ways of tucking such socially conscious commentary into this farcical situation.

All over again, Seth Rogen and Rose Byrne are funny, endearing and identifiable partners as Mac and Kelly. Byrne was the first film’s scene-stealing secret weapon—and it was lovely to see a wife character getting to be a badass leader rather than a nag or stick in the mud—but since more time has to be made for Teddy and the Kappa Nu sisters, there’s more equal playing field for everyone. The often-underestimated Zac Efron no longer has to prove himself. Still BMOC charismatic as the clingy, stunted, but smarter-than-he-looks Teddy, Efron gets to wring even more laughs on his own, but the idea of teaming him up with Rogen and Byrne was an inspired one.

Chloë Grace Moretz has a lot of wild, weed-laced fun, letting herself loose with all the comic shenanigans as Shelby, who’s as much of a misfit loner as she is a take-charge leader. As Beth and Nora, Kiersey Clemons (2015’s “Dope”) and newcomer Beanie Feldstein (Jonah Hill’s sister) are appealing go-getters who have bright futures in comedies. There are just enough scenes between the three girls that, like the frat brothers in the original, aren’t just stereotypes. As a counterpoint, Selena Gomez’s game extended cameo as a perky sorority president is pretty amusing. Ike Barinholtz and Carla Gallo are well-used, as Mac’s best friend Jimmy and his perpetually gum-smacking wife Paula, who are back together now and pregnant. Dave Franco reprises his role without being integrated into the main story, but that’s the point; his Pete has moved on, whereas Teddy has not. It’s refreshing, too, that his engagement with another man is not treated flippantly as a joke.

When all else fails, “Neighbors 2: Sorority Rising” trendily turns to gross-out gags that contemporary audiences shouldn’t find too shocking and too many over-the-top pratfalls. Still, it’s never mean and not overly politically correct that it forgets to be funny, and there are more hits to make up for the occasional misses. For instance, Mac and Kelly’s reactions to one of Kappa Nu’s sabotage schemes—they hack into the couple’s phones and forge a miscommunication—strain common sense in a non-sequitur sequence that could have been excised and wouldn't have changed a thing. Better is a running joke where the Kappa Nu pledges do work around the house, dressing, talking and bumbling around like Minions. The airbag prank from the original isn’t rehashed but actually has a new purpose here to satisfying effect. There's one Holocaust joke made by the Jewish Mac that skips over offensive and goes right to hilariously bold. Then, when Mac and Kelly get back at the girls, a chase set-piece during a tailgate party is an anarchic highlight where Teddy, rubbed in grease from a roast, uses his body as a distraction. Just to be clear, “Neighbors 2: Sorority Rising” shouldn't be oversold as some brilliantly comedic window into women’s lib or a lofty dissertation, but it has more socially relevant ambition than most comedy sequels and more side-splitting moments than one expects from a rigid formula.