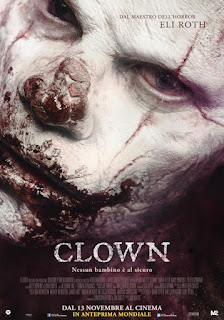 Back in 2010, “Clown” first originated as a fake trailer that was purported to be a new film from “master of horror Eli Roth.” Instead of instituting a lawsuit when finding the video uploaded to YouTube, Roth was delighted by the idea, agreeing to attach his name as producer and backing writer-director Jon Watts (2015’s “Cop Car”) and co-writer Christopher D. Ford to turn their 77-second video into a feature-length film. For those with a taste for macabre entertainment, “Clown” not only has a crackerjack premise that of a ghastly “Tales from the Crypt” yarn but a fully developed execution. It’s not every time a germ of an idea pays off as an actual film, but Watts and Ford—and for that matter, Roth, who’s always one to have in your corner when it comes to the genre that scares us—are able to take chances and impressively never compromise their black-hearted vision.

When the clown cancels last minute for their son’s birthday party, family-man realtor Kent McCoy (Andy Powers) happens to find a clown costume in a trunk in the basement of  a renovated property. He makes for a good replacement, but the morning after the party, the clown get-up just won't come off — not the make-up, no matter how hard he scrubs; not the red nose or rainbow-colored wig, no matter how hard he tugs; and not even the suit. Kent tries everything (using an electric saw is probably the worst idea), even with the help of pregnant wife Meg (Laura Allen), a dental hygienist who nearly rips off his entire real nose with her forceps. Then he beomes ravenous for sweets, the rumbling of his tummy never ceasing, and gets very sick. As Kent tries to locate the demonic origins of the costume, it might already be too late as he can no longer fight his hunger to kill and eat children. Meg hopes her husband is still in there, but their son, Jack (Christian Distefano), could become a victim.

Shot in 2012, “Clown” was released two years later in Italy and has sat on the shelf until now seeing a VOD release. Like many a grindhouse flicks, that a trailer blossomed into a 100-minute film is a miracle unto itself; even more admirable is how good the screen-ready final treatment actually turned out to be. For a premise that rides the line of dumb and freaky, the filmmakers make it work and achieve the latter. With cosmetic similarities to 1986’s “The Fly,” 1996’s Stephen King adaptation “Thinner” and 2014’s “Starry Eyes,” the film is a story of deterioration and transformation. The idea of someone morphing into an evil monster with every sign of their former self and humanity gradually disappearing is always ripe for horror, and there’s something terrifying about the irreversibility. It’s worked with vampires and werewolves and now we can add evil clowns. In order for an unbelievable situation like this to work, the performances should do some of the heavy lifting, and they do. From the start before his metamorphosis, Andy Powers has an affable everyman quality without turning Kent into a pathetic milquetoast. Then once the clown suit becomes his skin and Kent’s body is essentially a host, the actor sells the horror under the clownish latex without losing sight of the tragedy he’s causing himself and his family. Laura Allen holds her own as wife Meg, shouldering an emotional stance that rides over into desperation as she’s torn to have her husband back. Understandably, Meg sides with her friends and father at first, thinking Kent has just lost his mind, but then she will do anything to have her husband back, no matter how selfish it is. Also, always-memorable character actor Peter Stormare is on hand for exposition as clown suit expert Karlsson, delivering it as kookily as he can.

As a truly horrific and demented cautionary tale that takes itself seriously, “Clown” increasingly crosses the line and goes as far as it possibly can without becoming unwatchably grim. In ways both perverse and wince-inducing, the film has it in for children, both petulant and innocent. Once Kent goes on a murderous rampage, director Watts knows just how much to show before cutting at the right moment. The setting for a sinister sequence at a Chuck E. Cheese is inspired and a blood-flowing nightmare staged inside a play tube is creepily exploited for tension and gnarly gore. Without ever treating itself as a joke but not really having a lot of time for subtlety, the script still squeezes out burnt-to-a-crisp humor where it can without completely pulling the viewer out of its unsettling spell. Neil Sedaka’s 1962 poppy song “King of Clowns” even drops in as a wicked counterpoint right before Kent attempts to kill himself.

"Clown" gets a little stretchy in the middle—the proactive Meg has to read through books featuring drawings of the demonic culprit and snoop around the house where Kent found the costume—but for a twisted terror tale with an empathy buried underneath, this is an unthinkably ballsy piece of work. The film is also technically capable and moodily shot, particularly inside a neon-colored, carnivalesque indoor golf course, and there's the occasionally morbid stylistic flourish (i.e. the scene of a boy scout having his hand bitten cuts to a grade-school student making a red handprint on a paper for an art project). Horror fans will rejoice that this fiendish nasty finally came out of hiding, while coulrophobics can safely sit this one out.