Like a Hurricane: "Krisha" a stunning, ferocious knockout on a budget 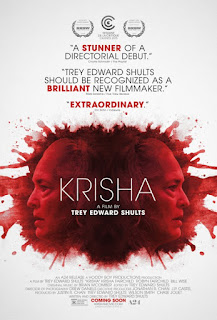 The black sheep of a family tries being a better human being in the ferocious, powerful “Krisha,” a remarkable feature debut from writer-director-editor-producer Trey Edward Shults. In expanding his 2014 short film, the 28-year-old filmmaker used his own family and friends as the ensemble to tell his story without a whiff of self-indulgence. Shults takes what on the surface is just another indie drama about family dysfunction, but he seems to have filmmaking instincts in his bones, even for his first feature, that it is no surprise the film received the Grand Jury Award and Audience Award in the narrative feature competition at the 2015 SXSW Film Festival. It is a testament to what one can do with little means—a nine-day shoot for under $100,000—and a lot of talent behind the camera. “Krisha” is unmistakably great independent cinema that stings like a bee.

The sixtysomething Krisha (Krisha Fairchild) hasn’t seen her extended family in a decade, but she is making an effort for Thanksgiving. Once arriving in Texas, she’s already agitated, wheeling her suitcase behind her and going to the wrong house at first and then stepping in mud. Finally, Krisha is greeted warmly by her sister, Robyn (Robyn Fairchild), and some other relatives. It’s a full house, with Robyn and her husband, their kids and spouses, a newborn, cousins and a pack of barking dogs. She appears slightly calm and collected, setting up shop in her guest room bathroom with all of her pills and keeping a box with a key she wears around her neck. Krisha thinks she has healed herself and takes on the responsibility of cooking the bird for the holiday feast to prove she’s back on track, but there are too many painful demons bound to come out and threaten the family gathering. How much longer can Krisha hold it together?

An intimate, unflinching character study and familial slice-of-life, “Krisha” is a gut-punch of jittery, devastating power that actually reinvents dysfunctional family, addiction and redemption dramas into a singular work of art. This would seem like a cathartic therapy session while the cameras ran, but as much as one can in a little over a week, time and care have been placed into telling this story with the utmost honesty. The film doesn’t judge Krisha but merely observes her as a wounded human being with her sins and regrets bubbling to the surface. Opening and closing on the title character’s face with a similar long tracking shot, her naked expression at the end is different from the beginning; the unnerving impact is the same, though. Front and center, Krisha Fairchild (the director’s aunt) is a shattering powerhouse. She is phenomenal, free of artifice and layering this hurricane of a character with a constant worry and vulnerability under a placid facade and then eventually letting it all hang out. As for the rest of the family, no one seems to be “acting.” Director Shults’ real mother, Robyn, isn’t a professional actress, but she’s utterly natural and unaffected as Krisha's sister who loves her but isn’t afraid to tell her that Krisha has to actually do the work in order to fix her relationships.

Lacerating yet sympathetic, the film is anything but unfeeling. Several of Krisha’s one-on-one exchanges with family members snap into focus as they unfold. When she tries to reconcile with her estranged grown-up son, aspiring filmmaker Trey (Trey Edward Shults), and make up for lost time, the unblinking longing in Krisha’s face and Trey’s refusal to look at her are both quite telling. In another scene, Krisha and her prickly brother-in-law Doyle (Bill Wise) have a cigarette on the back patio, playing catch-up until he can no longer keep quiet and calls his wife’s sister "heartbreak incarnate," “a leaver," and "an abandoner." Also, there is an incredibly moving moment where Krisha reunites with her dementia-suffering mother (Billie Fairchild). Quaking tension and unspoken bitterness course through this slow-motion train wreck before the uncomfortable truths rear their ugly heads.

“Krisha” doesn’t sound like it would be pulse-pounding, but it heightens the senses as much as any psychological horror film. In a way, it might actually be one, lying in wait for the proverbial bomb to detonate on Thanksgiving and never has the high-stress preparation of a turkey been so nerve-jangling. It’s in Trey Edward Shults’ confident verité filmmaking technique that truly captivates. Cinematographer Drew Daniels is like an observant fly on the wall with a bravura dance of the camera, evoking Terrence Malick (with whom Shults actually interned). The camera whirls around, albeit fluidly, as Daniels tracks Krisha’s movements in the kitchen while preparing the turkey, to the college-aged nephews wrestling and playing football, to the family dogs chasing each other in the yard. The score by composer Brian McOmber is unsettling and jarring in the best sense, appropriately accentuating Krisha’s deteriorating psyche. So raw, vividly real and personal as if it weren’t meant for anyone’s eyes, this is a staggering knockout that leaves one absolutely stunned.