Bourne Again: "Jason Bourne" a capably made slog of redundancy 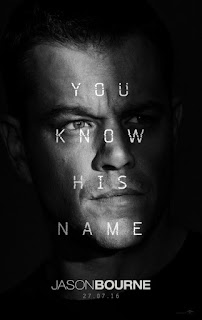 Universal Pictures probably should have left well enough alone after Paul Greengrass turned down his first chance to direct a follow-up to the “Bourne” trilogy. Many might have thought “The Bourne Legacy”—the superfluous but surprisingly engaging 2012 spin-off with Jeremy Renner as a different super soldier—was the way to kill a franchise, it actually poses the question, “Where is Aaron Cross when you want him?” Reuniting director Greengrass (2013's "Captain Phillips") and star Matt Damon after 2004's "The Bourne Supremacy" and 2007’s “The Bourne Ultimatum,” the definitively titled “Jason Bourne” cannibalizes its own franchise for a duller rehash set in the post-Edward Snowden zeitgeist. The spare parts are certainly there, but this rebirth is only periodically thrilling and more often stale. Can Jason Bourne just call it a day and turn himself in already?

Jason Bourne/David Webb (Matt Damon) has been living off the grid and fighting in an underground ring in Greece, or something. Of course, he is still wanted, this time by CIA director Robert Dewey (Tommy Lee Jones), whose team is creating yet another black-ops program. When he reconnects with old CIA contact-turned-hacker Nicky Parsons (Julia Stiles), he discovers new information about his late father (Gregg Henry) and how he died. Concurrently, Dewey is in cahoots with young social media CEO Aaron Kalloor (Riz Ahmed) and his launch of a new phone app to invade every citizen’s privacy, while determined CIA analyst Heather Lee (Alicia Vikander) wants the chance to bring in Bourne. Being pursued by assassin Asset (Vincent Cassel), the revenge-minded Bourne isn’t about to go in quietly.

Strictly for those who want to see essentially the same movie audiences were treated to three times already, the cynically conceived “Jason Bourne” feels like it was created by way of “Mad Libs.” There are new globe-trotting locations. There are new authoritative antagonists yelling at computer screens. And, instead of Operation Treadstone, there is Operation Iron Hand. Really, what is the difference? Whereas Paul Greengrass knew how to create momentum and found a way to push things at a propulsive clip then, this fifth entry is more like a cold slog to nowhere special, albeit with a few spurts of interest. It certainly isn’t anything in Greengrass and editor Christopher Rouse’s screenplay, which tries tapping into the relevance of cyberterrorism but barely does anything interesting with that idea. As an action film, it is proficiently made, at least when the skill of the choreography can actually be made out. Greengrass’ old shooting-style habits die hard, going beyond kinetic and right into erratic, incoherent pummeling. There’s an edgily executed motorcycle chase in the streets of Athens during a riot. Then, when Greengrass gets done trashing the Vegas strip with a Dodge Charger and a SWAT vehicle in an interminable chase that would be more at home in “Furious 7,” there is also a brawl of blows and choking between Bourne and his assassin that is intense and full of nose-cracking realism but handled so frenetically. Throughout most of the action set-pieces, the choreography still gets lost in all the chaos of Barry Ackroyd’s jerky, sometimes too-tight cinematography and co-writer Rouse’s choppy editing.

Matt Damon is back in the saddle, nine years later as Jason Bourne. The actor is still persuasive in the stoic role, but almost all emotional connection to Bourne is gone here. He has been off the grid, sure, and he has most of his memory back, okay, but what exactly has he been doing in the interim? Don’t ask such silly questions because that one is never answered. No one else has a life beyond the standard-issue plot of Bourne being tracked and then the CIA losing him; whether they are undynamic ciphers, pawns and/or cogs in the machine, this is Bourne’s world and they’re all just living in it. Even those who apparently share a past with Bourne hold little weight. As new CIA director Heather Lee, Alicia Vikander (2015's "The Danish Girl") brings a fierce intelligence to this nothing role whose motivations are constantly called into question. Julia Stiles makes a stone-faced return as Nicky Parsons and, once again, she is out of the picture before you know it as if the writers didn’t know what to do with her anymore. Finally, Tommy Lee Jones is, well, Tommy Lee Jones.

Talk about a return engagement, minus the engagement. “The Bourne Ultimatum” made a muscular, satisfying capper to the supposed trilogy and “The Bourne Legacy” showed potential for a reboot with an entirely different character. “Jason Bourne,” however, doesn’t revitalize or bring anything freshly intriguing to the series, nor does it accomplish that much on its own terms. It might even make fans of the trilogy forget what made the previous films so engrossing in the first place. Before the series calling card of Moby’s “Extreme Ways” gets cued up, there is the suggestion that there will be a next time, but perhaps Greengrass should just stop while he’s ahead.