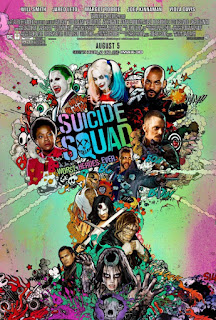 Following the lead of this spring’s turgid DC Extended Universe entry “Batman v Superman: Dawn of Justice,” “Suicide Squad” is another massive disappointment but even more so as its advertising campaign held such inspired, darkly fun promise. It just goes to show that a misleadingly awesome trailer can be made from a mediocre movie. Written and directed by David Ayer (2014’s “Sabotage"), who should have been a snug fit for a premise involving convicted miscreants coming together to do some good, the film is a sloppy mess that relentlessly sells itself and its billboard-ready antiheroes short with unwieldy, choppily edited storytelling, undernourished characters and lackluster action. Narrative cohesion be damned, there are at least five movies stapled together here that would be more worthwhile than the severely flawed finished one making its way into theaters. It is a bummer to report, but as if something went amiss somewhere from conception to the scripting stages to principal photography to the editing process, "Suicide Squad" is the ragged result.

In the wake of Superman’s supposed death, no-nonsense black ops government agent Amanda Waller (Viola Davis) assembles a ragtag task force of criminal metahumans she labels “the worst of the worst" to fight crime. They include not-too-bad hitman Floyd Lawton/Deadshot (Will Smith), who would give anything to be back with his 11-year-old daughter; Dr. Harleen Quinzel/Harley Quinn (Margot Robbie), a former psychiatrist who gave up her sanity for her patient Joker (Jared Leto); Digger Harkness/Captain Boomerang (Jai Courtney), a roguish Aussie hooligan who carries around a stuffed unicorn; El Diablo (Jay Hernandez), a tatted gangbanger with regrets for using his pyrotechnic abilities on his family; Killer Croc (Adewale Akinnuoye-Agbaje), a cannibalistic genetic mutation who lives in the sewers; and a few more who are barely dealt with. Waller has Colonel Rick Flag (Joel Kinnaman) to look after this dangerous team, but she has also manipulated Flag to fall in love with archaeologist Dr. June Moone (Cara Delevingne), now the host of an ancient witch named Enchantress whose heart in a box is controlled by Waller. If these disparate but selfish individuals can stop the real villainess from building up her army in the soon-evacuated Midway City and running the world, they will receive the reduced prison sentences Waller promises them and, maybe, just maybe, they can learn to work together. And if they fail, they die, and so be it.

Dashing one’s hopes that this might be the jolt in the arm DC Comics adaptations needed, a ‘la Marvel’s approach to “Guardians of the Galaxy” and “Deadpool,” “Suicide Squad” is a fraud. It misses most of the gleefully anarchic personality and exhilarating rhythm found in its kick-ass 2-and-a-half-minute trailer sharply cut to musical covers of “Bohemian Rhapsody” and "I Started a Joke." Getting around the fact that David Ayer’s hard-edged vision was probably muzzled by Warner Bros. to nab a PG-13 rating, the finished product exhibits bigger problems than the missed opportunity of an R. Slapped-together montages with aurally pleasing pop/hip-hop songs and cheeky, flashy graphics are mistaken for satisfactory character development, a technique done with even more care in, believe it or not, 1998’s house-party teen comedy “Can’t Hardly Wait.” There is economical storytelling and then there is haphazard, half-assed storytelling, which in this case feels like the weekly recap of a TV series. The members of the Suicide Squad are such an odd bunch that one wishes writer-director Ayer didn’t rush through their introductions like a marathon runner, each criminal established in an expository briefing for the time it takes Amanda Waller to finish digging into a rare steak during her pitch meeting. With such an overstuffed cast of antiheroes and supervillains, more time would have been valuably spent exploring these characters for longer than bare-minimum snippets; maybe, that way, the viewer would actually be invested in their mission of saving the world from Armageddon, a derivative conflict that holds no tangible stakes here.

With a few exceptions, the script does its “suicide squad” a disservice, taking but one breather in a bar to actually concern itself with its characters who must at some point make up a cohesive unit but only come across as pawns in Amanda Waller’s pocket. Moreover, they don’t really get the chance to be bad guys; they just keep reminding us. Appropriately introduced by The Rolling Stones' “Sympathy for the Devil,” Viola Davis carries herself with her formidable “voice of God” and gravitas, like always, as cold, ruthless puppet master Amanda Waller. Though she’s not a super-villain, Waller might even be worse. As soft hitman Deadshot, Will Smith rides on sheer star power; he played an alcoholic superhero in 2008’s “Hancock,” and here, his charismatic wisecracks shine through every once in a while. With what little he is given, Jay Hernandez manages to garner more sympathy than most as ready-to-burst pacifist El Diablo, while an unrecognizable Jai Courtney at least registers some humor as Captain Boomerang. Meanwhile, Adewale Akinnuoye-Agbaje’s Killer Croc and Karen Fukuhara’s soul-trapping swordswoman Katana are absolutely expendable with barely-there backstories and characterizations, while Adam Beach’s scaling-proficient assassin Slipknot is a sixth fiddle benched as soon as he comes on-screen.

Filling in the gaps made by the script, the incomparably cast Margot Robbie dominates and brings so much life to every scene she's in. Disappearing into the role of gonzo, dollfaced sexpot Harley Quinn, the actress is clearly having a blast with the Bronx accent and every dementedly bubbly giggle, wielding of her baseball bat and strut in her hot pants. Robbie is so endlessly watchable and unpredictably crazy that she makes a case for Harley's own origin story. From the 10-15 minutes we see of The Joker, Jared Leto fully commits with his method turn. He is effectively freaky in his make-up and metallic grill but grievously underutilized, and it seems most of his efforts found their way on the cutting room floor. Interestingly enough, it’s Harley's flashbacks of Joker's corruption before falling together into the vat of Ace Chemicals that compel more than the plot proper. And then there’s Cara Delevingue, making a lasting mark in “Paper Towns” but struggling to sell menace as the real threat here. She can’t help it that, aside from Dr. June Moone’s spooky transformation and cool get-up, Enchantress is a lame bore who spends most of the movie practicing Zumba in a silly headdress on a monument altar as a swirling vortex of garish CGI hovers above. If she weren’t hokey enough, Enchantress has a brother, Incubus (Alain Chanoine), who just becomes another tacky CG monster that looks like scraps from “Gods of Egypt.”

In giving the film the benefit of the doubt, “Suicide Squad” intends to check a lot off its to-do list—and litter in Easter Eggs that fanboys and fangirls will pick up on—but does not quite know how to execute it all. It's doubtful even a three-hour "ultimate edition" cut can solve the film’s fundamental issues. Late attempts at pathos do not work and character motivations fail to connect, as if key scenes were missing to bring the necessary emotional impact. The action set-pieces aren’t the least bit thrilling, just a forgettable bunch of choreographed fights with murky lighting and fast cutting. Harley Quinn’s solo scene of kicking ass in an elevator even underwhelms, despite being cued to K7’s “Come Baby Come.” And, finally, the visual palette is rainy and grungy, not unlike the bleak sameness of Zack Snyder's "Batman v Superman: Dawn of Justice," only popping with psychedelic-pop colors in the early scenes with the cackling Joker and his main squeeze, as well as the end credits. There are indelible images and glimpses of a much better movie here, but in the way it has been cut to ribbons and then released, it is too frustratingly uneven to recommend. One envisions a superior “Suicide Squad” had Harley been saved by her jokey puddin’, leaving the two of them to paint the town red. Now, why couldn’t we have seen that movie?
Grade: C -