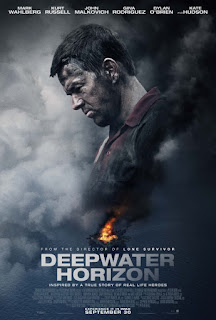 Documenting the worst oil disaster in U.S. history, “Deepwater Horizon” is simply but grippingly told. Being based on true events—and opening with an audio play of one of the survivors about to give his sworn testimony in court—the film risks lacking suspense, and yet that never seems to be a problem. Director Peter Berg (2014’s “Lone Survivor”) skillfully relives the BP oil drilling rig explosion and fire that happened on April 20, 2010 to 126 crew members. It’s a realistic, immensely scary dramatization mounted with harrowing intensity, just not much more than that, landing somewhere between a pyrotechnic-laden disaster pic and survivalist human drama.

Leaving wife Felicia (Kate Hudson) and daughter Sydney (Stella Allen) for 21 days and nights, technician Mike Williams (Mark Wahlberg) goes off on a routine tour of duty on Deepwater Horizon, an oil drilling rig 41 miles off the coast of Louisiana. His boss, Captain Jim Harrell (Kurt Russell), is angered by the BP executives’ go-ahead to run a pressure test that ensures the integrity of the oil well with malfunctioning equipment. Despite the readings of red-zone pressure, the Transocean workers follow through with the test to make up for BP being behind schedule and over their budget. Then, a geyser of mud, gas and water erupts through the pipe, and the vessel is engulfed in flames. With debris and fire surrounding him, Mike must risk his own safety to rescue his remaining crew members.

Scrupulously crafted and technically imposing, “Deepwater Horizon” is an honorable story of heroism and survival. Basing their screenplay on David Barstow, David Rohde and Stephanie Saul’s New York Times article “Deepwater Horizon’s Final Hours,” screenwriters Matthew Michael Carnahan (2013’s “World War Z”) and Matthew Sand (2009’s “Ninja Assassin”) are streamlined and workmanlike in their handling of characters. A scene at home, where Mike’s daughter Sydney (Stella Allen) practices showing and telling about her science project, is pretty on the nose. When the Coke can, standing in as the oil rig, explodes, it’s some heavy foreshadowing for what’s to come, and yet, it’s an efficient way to introduce outsiders to how deepwater oil drilling works. Jimmy Harrell asks one of the clueless BP workers to remove his magenta tie because the color signifies a severe warning in their industry. In the first half once the characters are on board, a lot of the shop talk—while more comprehensible than “The Big Short”—will go over many heads, but it’s accessibly conveyed. As director Peter Berg mounts the lead-up to the oil blowout with a fair amount of dread, waiting for the explosion is like lying in wait for the shark from “Jaws” to attack.

Earning top billing, Mark Wahlberg solidly inhabits the role of Mike Williams as a likable family man, sharing some emotionally stirring scenes before and after the horrific event. When Mike steps into action, he is a believable flesh-and-blood hero. As Mike’s loving, concerned wife Felicia, Kate Hudson is mostly called upon to canoodle with Mark Wahlberg, talk to him over Skype, and then later sit and wait after she can’t get any information on her husband’s status. She has a little more to do than Laura Linney in “Sully,” but somebody had to take the obligatory part to represent all of the wives, and Hudson does it with conviction. Everyone else, including Kurt Russell, who gets one scene with real-life stepdaughter Hudson as the crew's trusted boss; Dylan O’Brien (2015’s “The Scorch Trials”), as floorhand Caleb Holloway; and Gina Rodriguez (TV’s “Jane the Virgin”), a charismatic presence as sole female navigation crew member Andrea Fleytas, is there to try and stay alive. Lastly, John Malkovich gets to be heartless and greedy with a thick Louisiana drawl but too few shades in between as BP exec Donald Vidrine; ultimately, though, the disaster itself is the real antagonist here.

As a story, “Deepwater Horizon” moves in a straight line from start to finish. That the eleven casualties aren’t really given the time of day as fleshed-out people is a missed opportunity, but what director Berg is able to spectacularly stage should not be marginalized. Where the film excels is in building stressful tension and “you-are-there” urgency, along with ratcheting up the stakes with plenty of bone-crunching moments that will have the squeamish turning away. Attention is held for the full 107 minutes, and if all Berg wanted to do was immerse the viewer in this disaster without exploitation, then the film accomplishes what it set out to do.