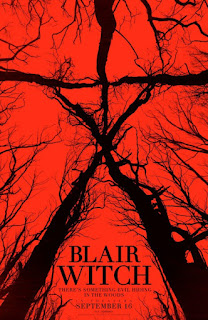 Starting with “10 Cloverfield Lane” being the successor to 2008’s “Cloverfield,” the year of the secret belated sequels is upon us. Advertised under fake title “The Woods” before being unveiled as the sequel-cum-remake to 1999’s low-budget groundbreaker “The Blair Witch Project,” “Blair Witch” is another shaky-cam excursion into the woods and not the terrifying game-changer it has been hailed to be out of the festival circuit. When the one-of-a-kind original premiered at the 1999 Sundance Film Festival, it made audiences believe that the footage they were watching was authentic. Turning out to be fictionalized, though, did not break the film of its intensely jittery, powerfully suggestive spell. With this 2016 sequel continuing the legacy—and forgetting 2000’s critically-reviled-but-slightly-better-than-that “Book of Shadows: Blair Witch 2”—it's too bad that beyond the surprise marketing coup, that is where the ingenuity mostly ends. As it happens, “Blair Witch” is no match for its predecessor or, quite frankly, many of the effective found-footage entries that followed. The results just don't live up to the overinflated hype.

After Heather Donohue went missing back in 1994 in the Black Hills Forest of Burkittsville, Maryland, her brother James (James Allen McCune) finds a DV tape on YouTube that very well could be footage shot by Heather herself. Wanting to find closure and answers, he gets in touch with local vlogger Lane (Wes Robinson) who found the tape. Coincidentally, James’ close friend Lisa (Callie Hernandez) wants to make a documentary and decides to use this as an opportunity without exploiting her pal. They convince two more, James’ childhood friend Peter (Brandon Scott) and girlfriend Ashley (Corbin Reid), to go camping in the Black Hills Forest and then find their guide in Lane and his purple-haired girlfriend Talia (Valorie Curry), another local with knowledge of the Blair Witch legend. Ignoring a sign that reads, “No entry after night fall,” the six enter a trail into the woods, and then strange, unexplainable things begin happening, particularly at night. They hear noises outside their tents. They lose time. They try to leave but end up walking in a circle. Will James and his friends actually find his sister and the house where she vanished, or will they just become another set of victims to the Blair Witch and her woods?

In director Adam Wingard and screenwriter Simon Barrett, horror fans trust. They transcended the genre with both 2013’s thrillingly unpredictable “You’re Next” and 2014’s wickedly entertaining “The Guest,” but not this time. Based on their previous efforts, “Blair Witch” serves as a significant letdown. It feels less than inspired, and what’s more, it barely lifted a hair on this viewer’s body, which is usually a difficult feat. How are these talented guys even capable of making a horror film that equates to a "is-that-all-there-is?" shoulder shrug? To give them the benefit of the doubt, the filmmakers are in one of those “damned if you do, damned if you don’t” situations from the outset. If they change too much of the formula, it would be seen as disrespectful and no longer of a piece with the lore, and if they don’t change anything, it is just a beat-for-beat rehash. The film largely opts for the latter, calling back key moments from “The Blair Witch Project,” even to the point that the characters roast sausages over the fire, and the pentagram sticks are kind of a must.

Director Wingard does offer up a few moderately clever ideas with the advancement in technology since 1999. Each character wears a camera clipped on their ear with a built-in GPS, and there’s a drone that Lisa sends up over the trees for aerial shots, but neither sophisticated addition adds much more to the proceedings as one might expect. The first hour of setup takes a long time to start paying everything off, especially when so much of it feels like a pale imitation that forces one to make a running checklist of what worked better the first time. A few jump scares are needlessly tossed in, while a character humorously acknowledges that everyone needs to stop startling her. Aided by a booming, sometimes chilling sound design, there is a squirmy body-horror moment involving someone’s injured foot and a sequence where one must crawl through a very tight dirt tunnel will most likely get the claustrophobics. Once it comes down to the last 15 minutes or so, the film improves ever so slightly, ratcheting up the creepy intensity but also devolving into a lot of camera pans, camera shaking, glitches and cuts to black, and characters screaming and calling out for their friends.

When it does finally take off, “Blair Witch” showcases the filmmakers’ craftsmanship, but nothing new or exciting is brought to this officially tired subgenre. The immediacy and freshness is just not there. As characters experience possibly supernatural phenomena in the woods and run for their lives, we should be gasping for air and scared out of our minds with them. It’s no fault of the actors, who competently reside in their parts and put blood, sweat and tears into their mostly unaffected work, however, this group is decidedly harder to care about than our trio of documentary filmmakers 17 years earlier. For those who have yet to follow Heather Donohue, Josh Leonard and Michael Williams into the woods or haven't seen anything else filmed with the first-person conceit, “Blair Witch” should do the trick as a decent vessel for scares. For everyone else, it is more of a frustrating experience than a petrifying or satisfyingly visceral one. Perhaps this whole found-footage aesthetic really should be put down like an old dog if two of the best in the genre right now can't even breathe life into it.