Spawn of Bad Choices: "Antibirth" a bananas but half-baked trip 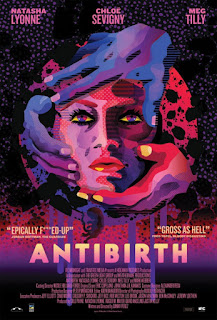 Many horror films tend to be about more than is apparent on a surface level. “Antibirth,” the narrative feature debut of experimental video artist Danny Perez, is an addict’s drug-fueled pregnancy through the prism of a psychedelic body-horror nightmare. It is a safe bet no one will expect the whacked-out, royally bananas goings-on of this half-baked fever dream, but at one point or another, a film needs to have more to it than a trippy, “what-the-hell-am-I-watching?” vibe. Visually hallucinatory as "Antibirth" might be, the viewer will have felt he or she has endured a bad trip rather than a cinematic high.

Lou (Natasha Lyonne) doesn’t get through one day without drugs, alcohol and junk food. She’s on a lifelong bender, cleaning at a motel by day and getting wasted whether she’s out or at home in her late father’s trailer that she inherited. Even after a wild rave in the Michigan woods with best friend Sadie (Chloë Sevigny), Lou fails to remember what happened that begins making her feel ill. Soon enough, she realizes she might be pregnant with morning sickness and blowing up like a blimp at an alarming rate, despite not having slept with anyone in months. It’s not until a military vet named Lorna (Meg Tilly) shows up and lets Lou in on a medical experiment conspiracy that might be afoot. Lou is not going to be all right.

Dancing furries in a kids' bowling alley. An alien conspiracy. Pus-oozing blisters. The birth of a creature crossed between a wookiee and the demonic mutant offspring in Larry Cohen’s “It’s Alive.” All of these disparate images and plot points only muddy the waters for the sake of being weird and, thus, keep the viewer at arm’s length. Were it not difficult to warm up to already with an inscrutable, stream-of-conscious narrative, “Antibirth” doesn’t really care if we like its obnoxious protagonist or not. By no fault of Natasha Lyonne, who gives it her all with sardonic recklessness, Lou is decidedly flawed and hard-edged as a burnout, a role Perez wrote directly for the actress, but she is also too passive and consistently self-destructive to care about her abnormal plight. It is almost preferable to see a character who is far from being squeaky-clean and likable and having it all figured out and then seeing him or her gradually earn our sympathy. Still, in the case of Lou, she isn’t even interestingly vulgar. Read the rest of the review at Diabolique Magazine.