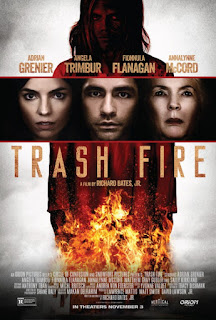 “Trash Fire” is a nasty piece of work with pointed wit and real bite. Writer-director Richard Bates Jr. (2014’s “Suburban Gothic”) really comes into his own with this twisted and blackly comic relationship drama turned Southern Gothic macabre tale. The film smoothly switches directions and mounts a simmering disquiet into heavily uncomfortable territory involving religious extremism and major family drama. Toxicity is the name of the game, but it’s a master of tonal precision that Bates Jr. handles as a full-bore burnt-black comedy.

Web designer Owen (Adrian Grenier) and interior designer Isabel (Angela Trimbur) are a miserable couple of three years. An alcoholic with bulimia and prone to have epileptic seizures, Owen lost his parents in a house fire, while his sister was severely burned with third-degree burns. Isabel still can’t find herself to leave him, even if her Bible-thumping brother Caleb (Matthew Gray Gubler) and Owen have a mutual dislike for one another. When she realizes she’s pregnant, Isabel demands that if they are going to have this child together, they will have to go reconcile with Owen’s God-fearing, shotgun-toting grandmother, Violet (Fionnula Flanagan), and his sister, Pearl (AnnaLynne McCord), whose scorched, reclusive state has left Owen feeling responsible. Eventually, Isabel will more than understand why her boyfriend has stayed far away.

Whereas Bates Jr.’s first feature, 2012’s “Excision,” was a shocker that sometimes felt gratuitous, “Trash Fire” sets a vitriol-tongued tone that grows more unsettling once Owen and Isabel get to Grandmother’s house. “For as long as I can remember, I’d been waiting for my parents to die, so I could commit suicide without feeling an overwhelming sense of guilt,” says Owen, pouring his guts out to his sound-asleep psychiatrist (Sally Kirkland). That’s just one piece of the deliciously barbed dialogue Richard Bates Jr. has penned. To read the rest of the review, go to Diabolique Magazine.