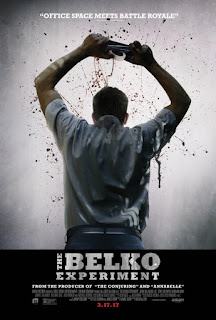 James Gunn had a draft of “The Belko Experiment” in his drawer for quite a while now, even before the major studio nabbed him to direct 2014’s “Guardians of the Galaxy.” The premise instantly calls to mind a hybrid of 2000’s “Battle Royale,” 2012’s “The Cabin in the Woods,” and 2013’s “The Purge” in the workplace, and as an elevator pitch, it’s a depraved humdinger. Given that Gunn’s script has been directed by Greg McLean (he of the ruthlessly vicious “Wolf Creek” films and 2016’s worthless “The Darkness,” which called for a recovery project from him), the outcome is more unsparing and mean-spirited than darkly fun. “The Belko Experiment” might also think it gives its audience more to chew on afterward than it really does, but that still doesn’t take away from it being an effectively sick, nasty, berserk piece of work. It’s so good at its job that even after a while, it does admittedly become too blunt and numbing for its own good.

A sterile, imposing office skyscraper in the middle of remote Bogotá, Colombia already seems off from the start, but on this particular day, the security is military grade, searching every worker’s car at the gate and sending home every local employee. The employees of nonprofit government company Belko Industries go on with their day, until a mysterious voice on an intercom makes an alarming announcement: if two out of the eighty people in the building are not killed within thirty minutes, then two will be chosen at random. Then the building goes on lockdown, steel shutters covering every window and door. With everyone leaving their own respective floors and meeting in the lobby, COO Barry Norris (Tony Goldwyn) tries to alleviate any panic and assures everyone that it is probably a sick joke. Of course, that’s before two employees’ heads explode from the inside from an implanted tracer tag (every worker has one to evade kidnappings in South America). Next up in this so-called social experiment, thirty people must be killed in two hours or sixty more will die. Only a divide can form when the still-sane Mike Milch (John Gallagher Jr.) tries to reason and think about their options, while others have a different point-of-view and no trouble getting down and dirty if it means more hope for them to survive.

More cynically minded than satirically savage, “The Belko Experiment” has nothing new to say or add to the conversation of human nature and man’s primal instincts coming out in a every-man-for-himself, kill-or-be-killed situation. If it’s a satire, what is it actually satirizing? Corporate power? The “what would you do?” concept has been mined many times before, sure, but it’s still a provocative hook by which to amp up the violent carnage and exploitation. For a straight-ahead genre pic that goes for the jugular, director Greg McLean knows how to work up a palpable sense of anxiety and uncertainty to connect the audience to the characters’ life-or-death quandary. And, at a no-nonsense 88  minutes, the narrative structure is tight and free of excess, except for the fact that the film becomes an excessively bloody and grisly free-for-all.

The characters are pretty much all types, adequately set up before the bloodletting occurs, and just enough time is spent between friendly co-workers in their cubicles to hope certain ones don’t become a recipient of a bullet to the head or a knife in the gut. Most of them are played by an interestingly assembled cast, too, including Michael Rooker as a maintenance worker; Melonie Diaz (2013's "Fruitvale Station") as a woman having a hell of a first day on the job; and a grinning John C. McGinley as an office pervert who inevitably makes the switch into alpha-male psychopath. Compared to those who are just inconsequential slasher-flick fodder, John Gallagher Jr. (2016's "Hush") is a solid everyman and voice of reason, and both he and girlfriend Leandra (Adria Arjona) are a couple worth latching onto until the end. Tony Goldwyn is also quite chilling as the boss, who wants to maintain order but makes a choice and ends up only being out for himself at the end of the day.

James Gunn’s cheeky, twistedly amusing sense of humor sneaks through from time to time but not nearly enough. For instance, after someone is hacked to death in a restroom stall, the door shuts to reveal and linger on a sign that reads, “Keep this area clean and please wash your hands.” There’s even a little levity with the inclusion of office stoner Marty (Sean Gunn, James’ brother who had a long run as the eccentric Kirk on TV’s “Gilmore Girls”) and his conspiracy theory that it’s the water in the water coolers making everyone crazy. Ironic musical choices do not work, not the Spanish covers of “I Will Survive" and “California Dreamin’” that open and end the film, and not a montage of panic cued to classical opera.

Next to learning who is playing God and orchestrating this experiment, guessing the last man or woman standing becomes the ultimate purpose here, and finding out both are not unsatisfying. Director McLean and writer Gunn even use the “final girl” archetype to mess with our expectations. When the head honchos open the armory vault and load up on guns for themselves, it does dash one’s hope for more brutally inspired kills outside of making a machete from a paper trimmer. Also, before it’s too late, death by tape dispenser is a new one. Sometimes more than the murders themselves, the anticipation is scarier. A horrifying scene in which a group of men who put themselves in charge start lining up workers by age and those with children of a certain age before a mass execution especially holds one in its relentless grip. “The Belko Experiment” offers a cool idea and some cheap thrills, but the execution could have led to much more than a routine if skillful kill-a-thon. Maybe a sequel, which McLean and Gunn obviously hope for, can learn from this film’s missed opportunities and improve upon itself much like “The Purge” has with each new installment.