Princess of Darkness: Rewards are few in moody “Blackcoat’s Daughter” 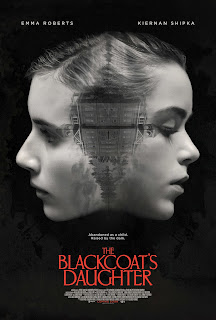 Forgoing original title “February” for a much more foreboding choice, “The Blackcoat’s Daughter” is a divisive experience. On the one hand, it’s a shivery, hushed mood piece that defines the term “slow burn,” favoring atmosphere and a certain chilly vibe over story momentum and just about everything else. On the other hand, it’s inert, striking one note and staying there. No matter the side one takes, there is auspiciousness in the writing-directing debut of Anthony “Norman Bates” Perkins’ son Osgood Perkins, whose second film “I Am the Pretty Thing That Lives in the House” already got picked up by Netflix last year, to get one excited to see where he goes from here. While Perkins certainly takes advantage of his frigid and isolated location, so much that its presence is actually felt throughout, “The Blackcoat’s Daughter” is a minimalistic horror effort that doesn’t give enough over to the viewer in return.

The female students at The Bramford School, a remote Catholic boarding school in snow-covered upstate New York, are about to begin their winter break. Kat (Kiernan Shipka) and Rose (Lucy Boynton) are the last to leave, waiting for their parents to pick them up. For the time being, Rose is asked to look after Kat, who already seems aloof and withdrawn, or maybe just possessed by a Satanic presence. Later that night when Rose sneaks out with her boyfriend to tell him that she might be pregnant, she returns home to find Kat acting strangely and kneeling in the boiler room. Meanwhile, a young woman named Joan (Emma Roberts) with a medical wristband is picked up at a bus station by a nice man, Bill (James Remar), and his less-forgiving wife, Linda (Lauren Holly), who would rather he not bring up the death of their daughter in conversation. They’re headed to Bramford, but how these separate timelines converge is not as easy to guess as it sounds.

Seen entirely on the level of an audio-visual exercise, “The Blackcoat’s Daughter” is meticulously crafted, sure-footed, and drenched in sinister, raven-toned dread. Julie Kirkwood’s austere but exquisitely ominous lensing and the string music score by Elvis Perkins, the director’s brother, are part and parcel of the film’s unsettling atmosphere. It’s admirable, too, that Osgood Perkins is not a spoon-feeder, relying on his audience to have patience, pick up on the hints and interpret the goings-on for themselves, and breaks from the tropes of mainstream horror films; he even goes for a more old-fashioned approach with the use of pay phones. His screenplay, though, is undercooked and bereft of much of a point. The film crisscrosses between Kat and Rose at school and then Joan getting a ride, and though one gradually learns how the two sections intersect, it still doesn’t come fully together to reward those who have stuck out the languid pacing for a payoff.

The actors all capably key into the morose and restrained tone of the piece. Taking quite the leap from Sally Draper on TV’s “Mad Men,” Kiernan Shipka makes an indelibly chilling mark as Kat, a vessel to carry out wicked deeds. When she starts to look like death, Kat is way past the point of no return. Lucy Boynton (2016’s “Sing Street”) is mainly asked to react, but before then, she characterizes Rose with some charisma and prickliness. As Joan, Emma Roberts is compellingly cryptic until one understands who she is supposed to be and what her intentions are, and even that is an unconvincing reveal. Creeping and crawling like the slow drip of a faucet, “The Blackcoat’s Daughter” is eerily suggestive, bypassing obvious jolts for a fearsome mood and disturbing insinuation, but it’s not quite enough this time. In the very last shot, there is a moment of clarity and hopelessness for one character that should be haunting and impactful in some way but mostly leaves one in a state of indifference. Even if he resists throwing the viewer a bone, Perkins sure knows how to craft a quiet sense of solitude and slowly approaching doom.