Save a Horse, Eat a Man: “Raw” a daring, unsettling coming-of-ager like no other 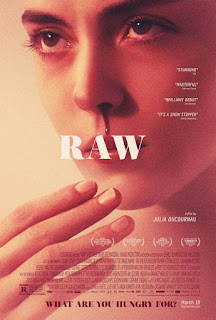 Cannibalistic horror film “Raw” isn’t the first of its kind to have such an effect on viewers, but reportedly, it made multiple audience members faint and heave at a screening during 2016’s Toronto International Film Festival. Such a physical reaction should give the film a badge of honor, however, there is more to it than just a series of flesh-eating money shots. This French-Belgian import marks the shockingly assured feature debut of writer-director Julia Ducournau, and it’s a square peg in the round holes of coming-of-age films for being about a young woman’s sexual awakening and gradual desire for flesh. Like a steak is to a strict vegan, “Raw” is clearly not going to be to everyone’s palate, and it shouldn’t have to be, but perhaps it should strictly be seen by the steeliest of stomachs, the not-so-faint of heart, and those nonjudgmental of others’ newfound eating habits. More importantly, it's for an audience that craves a horror film with a fierce female voice.

16-year-old vegetarian Justine (Garance Marillier) is attending veterinary school, following in the footsteps of her parents, who drop her off, and her older sister, Alexia (Ella Rumpf), who’s in her second year of study. During her first night in the dorms, she is awoken by upperclassmen who put her and other rookie freshmen through a series of brutal hazing rituals. Justine’s initiation continues with a class photo where the entire group is doused in buckets of blood and then soon after forced to eat a piece of raw rabbit kidney. In no time, her first taste of meat awakens something in her. Gradually, Justine changes, ripping into a raw chicken breast in the middle of the night and then very casually slicing a dog open during a dissection class in front of her gay roommate and only friend Adrien (Rabah Nait Oufella). At it turns out, veterinary school will change her forever and that one carnivorous moment will not be her last.

Classily directed and sensitively written by Julia Ducournau, “Raw” could hold a place in the transgressive wave of New French Extremism, but it is not out to purely disgust and shock. Ducournau has every opportunity to do just that but takes her time in revealing Justine’s journey, while trying to understand what Justine herself can’t fully understand and can’t resist. Lest one think this story about cannibalism will be entirely grim and track Justine going on a fleshy, id-centered killing spree, it surprises in that way. In fact, the word, “cannibal,” is never once uttered (or read in the subtitles). The cannibalism functions more as an erotically charged metaphor for nascent femininity, and how well the film works is a matter of subjective interpretation and Ducournau’s tone. At times, it’s darkly funny and even touching in its own way when the film gets to the heart of Justine and Alexia's sisterly bond.

Pre-credits, the very first image of “Raw” is so still and elegantly composed, and yet something abruptly shocking happens. Set in the middle of a country road, the camera spots a woman walking along the side, cuts to an oncoming car, and then back to where the woman was walking but can no longer be found. When the car comes flying back, the female walker jumps into the street, forcing the driver of the car to swerve and hit a tree; the seemingly suicidal bystander then gets up, unharmed, and walks over to the car. What this has to do with the rest of the film is revisited later on but should be experienced first-hand.

19-year-old feature newcomer Garance Marillier is in every scene, and as Justine, she goes to the brink without any fear. When she crosses that line, it’s believable and compelling to watch. Justine is also just a teenage girl, experiencing her first wild party, losing her virginity, and getting all dolled up before going out. Peppered with queasy moments, the film isn’t gratuitous but still unflinching and unusually artfully done. Just take the intimate moment where Justine licks and then begins to nibble on a severed finger, while most cringe-inducing of all might be a Brazilian wax gone wrong and a pesky rash that Justine can’t stop scratching. The work by cinematographer Ruben Impens (2013’s “The Broken Circle Breakdown”) is striking, particularly one image that holds on Justine underneath her bedsheet as if she’s in the womb. Not a “fun” film, per se, but a fascinating one, “Raw” is a lusty, unsettling, disturbing cinematic cherry bomb that boldly goes where most American films wouldn’t dare.