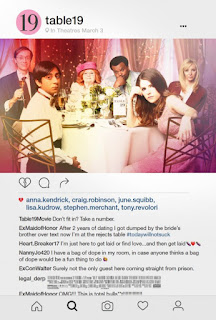 For “Table 19,” a lot of pieces are in place for what might have been “The Breakfast Club” at the back table of a wedding reception or, at the very least, a pleasant, frothy cinematic dessert. It has a dream cast and the story comes from Mark and Jay Duplass, and yet with writer-director Jeffrey Blitz returning to film a decade after his quirky 2007 indie “Rocket Science,” there is never a steady directorial hold on what the material should be. Occasionally low-key and then wacky and forced other times, “Table 19” wants to be a people-pleaser of a romantic dramedy that makes the viewer laugh and cry—that’s not to say a film can’t do both—but despite everyone’s efforts, it never quite clicks.

Eloise McGarry (Anna Kendrick) has been dumped via text message by Teddy (Wyatt Russell), her boyfriend of two years who also happens to be the brother to her oldest friend who’s getting married. She had to drop out as maid of honor but reluctantly checks “accepts with pleasure” (actually, she checks “declines with regret,” too, and sets the corner of the invitation on fire before deciding to mail it back). When Eloise shows up at the venue, she can’t seem to get over Teddy, watching him dance with his first girlfriend (Amanda Crew), and then takes her seat at the infamous Table 19. Since she helped the bride organize the seating arrangements, Eloise knows that everyone seated in the back of the reception hall was invited out of pity. Joining her are the bride’s former nanny Jo (June Squibb); ex-con Walter (Stephen Merchant), who’s the nephew to the father of the bride; the awkward Rezno (Tony Revolori), a would-be pick-up artist who skips his junior prom for this wedding; and Ohio diner owners Bina (Lisa Kudrow) and Jerry Kepp (Craig Robinson), a half-unhappy married couple who hasn’t had sex in three years. As is to be expected, this motley crew of tablemates becomes a support system all in a day.

Relatable as it is ripe for social awkwardness and, thus, fine comedy, the setup behind “Table 19” is a rather good one. Then, writer-director Jeffrey Blitz throws most of the potential away with improbable character interactions and largely flat comedy. The sketchily defined characters don’t all grow beyond types or experience arcs that one should give a rat’s ass about. Since we never see what made them work as a couple for two years, there’s no real will-they-or-won’t-they tension to Eloise and Teddy to put any stock in the outcome. Eloise’s casual encounter that might turn into something more with handsome, charming British wedding crasher Huck (Thomas Cocquerel) has a vaguely surprising payoff, but it seems extraneous. Blitz’s comic timing is also usually off with strained, unamusing pratfalls (why can’t a wedding cake just ever be left alone?).

Anna Kendrick is her likable self as Eloise, who doesn’t seem to be much of a character on the page without the actress’ innate sparkle. She does, however, manage to squeeze a little more depth out of Eloise and shares a couple of nice moments with June Squibb as the underappreciated, been-around-the-block Jo. Lisa Kudrow and Craig Robinson handle Bina and Jerry’s subplot involving a marital slump with maturity, but while one should be able to remain invested in their relationship, the two actors are underserved by the disjointedness of the editing and the thinness of the writing. Bina wearing a maroon cardigan that matches the rest of the wait staff gets its own running joke, and that’s one of the better ones. The film trusts that laughs will automatically spring from the gangly height and mere googly-eyed sight of Stephen Merchant, who can very well be funny with just a look. Unfortunately, his shtick here is Walter acting on-the-fly and claiming to be “a successful businessman.” And then nearly everything with Tony Revolori's Rezno, whose reason for being invited to the wedding is never made clear, is creepy and cringe-inducing without being funny. Finally, what is Margo Martindale doing in a voice-only performance as Rezno’s nagging mother?

If one just wants to bask in the togetherness of this cast, "Table 19" isn’t a total wash, but at the same time squanders the opportunity of making a film better than the one that was made. Simply put, it is just never as funny, affecting, or wise as you want it to be. There's the occasional zingy one-liner, but the laughs don’t hit like they should. The inauthentic notes in the script start to become glaring. In terms of trying to wax sage, this is one of those trite dramedies where characters hide out and smoke marijuana so they can ruminate on their lives and unfulfilled dreams. The band performing at the reception (frontman Brad Oberhofer and his Brooklyn band Oberhofer) at least offers an ‘80s mixtape full of aural pleasures, including covers of General Public’s “Tenderness,” Thompson Twins’ “Hold Me Now,” and Modern English’s “I Melt With You.” The final couple of grace notes lift up the contrivances but aren’t enough to turn around what wasn’t working. It’s not fun to pile on a movie that brought so many talented people together, but like the misfits at the random table, “Table 19” will soon be forgotten as well.