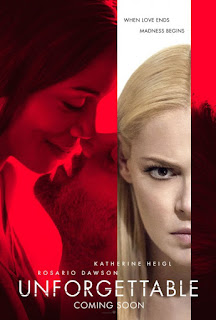 On the face of it, “Unforgettable”—a title that really doesn’t mean much—initially seems like there is nothing new at play here since the 1990s when the “…from Hell” thriller genre was hot and exploited mental illness for entertainment value. 1987’s “Fatal Attraction” set the precedent, and since then, there have been a slew of copycats and like-minded Lifetime movies. In recent years, variations on this run-of-the-mill template have either endeavored to be something more (2009’s “Chloe” and 2015’s “The Gift”) or were just guilty pleasures (2015’s “The Boy Next Door”), diverting time-wasters (2009’s “Obsessed,” 2015’s “The Perfect Guy” and 2016’s “When the Bough Breaks”), or just bad (2011’s “The Roommate”). Veteran producer Denise Di Novi makes her directorial debut here, with a screenplay by Christina Hodson (2016's "Shut In"), and luckily, she knows exactly the type of movie she’s making. Only sometimes bordering on camp but careful never to actually cross it, “Unforgettable” is otherwise a glossy, trashy melodrama that doesn’t stray far from the outdated formula but derives watchably wicked pleasure and even a modicum of substance from the lead performances by Rosario Dawson and Katherine Heigl.

A survivor of domestic abuse by a former boyfriend, blog editor Julia Banks (Rosario Dawson) is about to start her new chapter, moving to a small Southern California town to live with fiancée David (Geoff Stults) and his daughter, Lily (Isabella Kai Rice). She’s kept that difficult part of her life a secret from her beau, as well as a restraining order she has against her ex, but adding to her nerves is David’s ex-wife living not too far away to remind Julia that she might not be cut out for stepmotherhood. Tessa (Katherine Heigl) is tightly wound, always maintaining a perfect façade and clearly up to no good. She obsessively conspires to ruin the other woman’s blissful relationship before Julia and David officially tie the knot when she steals Julia’s phone and finds information that she can work with. As Tessa’s plan goes, Julia begins to crack, but of how much more is she capable?

Make no mistake, “Unforgettable” is not a deep psychological study, but there is a little more shading to Tessa than a one-note villainess, and it’s a testament to Katherine Heigl for making her more fascinating than she might have been. Freed from playing a blandly likable romantic lead, she has finally found a properly juicy fit for her persona. It was first seen in 2015’s “Home Sweet Hell,” an uneven black comedy no one saw, and whatever its many problems, Heigl was not one of them as a prickly, type-A Stepfordized wife who killed to keep her perfect-on-the-surface life. Once again, the actress seems to be actually having fun in maliciously evil mode, whether she’s vaping and drinking red wine when plotting her revenge in front of her computer, efficiently banging the waitstaff at David’s brewery, polishing silverware with gloves, and aggressively brushing her daughter’s hair and forcing her to be an equestrian like herself. Fury incarnate as the cunning Tessa, the statuesque Heigl is persuasive and deliciously icy, but the viewer even gets a sense of why she is the way she is, a product of her equally icy mother (Cheryl Ladd) with an untreated mental illness and worthy of a hint of sympathy at least. This is the Katherine Heigl we've all been waiting for, and it would almost be inconceivable if she wasn't anything like Tessa in real life.

Rosario Dawson brings equal strength and vulnerability to her part as Julia, who’s made worth rooting for, despite her decision to not tell David about her past. As with any project, Dawson’s emotions and reactions never feel less than true. There is also one particularly kinky sequence in which Julia, her mind on one track after Tessa drunkenly went on about David’s insatiable sexual prowess, takes the challenge in a restaurant restroom, intercut with Tessa masturbating. On account of how the part of David is written rather than the actor’s capabilities, Geoff Stults is handsome but boring, however, there wouldn’t be much conflict if he were extremely bright and clued into Tessa’s motives. As Tessa’s passive-aggressive mother, Cheryl Ladd is suitably frosty and informs who Tessa is as an adult; when she shows her daughter disapproval over the scones for teatime not being homemade, one relishes in the moment. Finally, comedian Whitney Cummings makes an impression, appealingly fulfilling the seemingly thankless role of Julia’s boss and friend, who otherwise would have been used to just be killed off.

“Unforgettable” is anything but, and it helps that it rarely pretends to be more than it is. In a way, it reminds one of Chris Columbus’ “Stepmom” with Julia Roberts and Susan Sarandon turned on its ear. Director Denise Di Novi does not forget to insert the violent and crazy into the soapy melodrama, particularly when a hair-pulling, knock-down, drag-out catfight is something to be expected. The one here decidedly delivers on that front, as Heigl and Dawson really go for it, slamming each other up against walls and making a mess of Tessa’s elegant foyer with a fireplace poker. With that said, how it ends is pretty nervy for the subgenre’s standards. Judged wholly on its own merits, “Unforgettable” is a tastily tawdry blend of the familiar and unexpected that works and might go well with a glass of Cabernet or three. Above all, may this be the beginning of a “Heiglssance.” 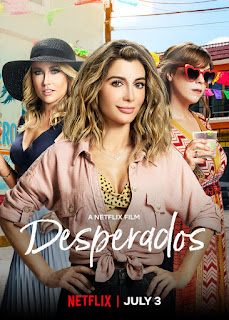 Bad Girls Trip: Pedrad gives her all, but "Desperados" strains hard to be raunchy 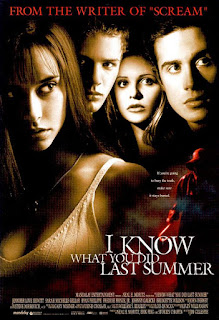 Retro Review: "I Know What You Did Last Summer" is no "Scream," and that's okay