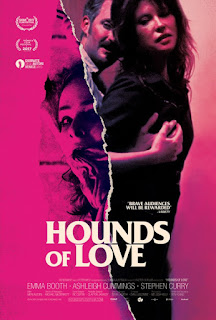 In many ways, Australian kidnapping drama “Hounds of Love” could have easily been off-putting and distasteful, wanting to repel and titillate at the same time, but that’s not the case. Unpleasant, unnerving and sharply constructed, writer-director Ben Young’s assured feature debut cuts deeper than it initially lets on for a story about the suffering of a victim and her captor and actually taps into domestic abuse and the relationship between mothers and daughters. This is accomplished genre filmmaking that isn't so basic and wants to achieve more than churned stomachs.

It’s Christmastime in 1987, Perth, Western Australia. Vicki (Ashleigh Cummings), the teenage daughter of separated parents, sneaks out one night to go to a party while staying at her mother Maggie's (Susie Porter) house. All dolled-up, she’s on foot to catch a taxi closer to the highway but gets picked up by a friendly couple in a car. They are Evelyn (Emma Booth) and John White (Stephen Curry), who offer her some pot at their house. She reluctantly accepts, but after the couple won’t let her leave, Vicki is chained to a bed. To survive, the teen tries to drive a wedge between Evelyn and John by getting inside Evelyn's head when they're alone. Meanwhile, Vicki's parents, Maggie and Trevor (Damian de Montemas), are worried but not quite convinced that their daughter is just a runaway.

Given its subject matter and true-crime trappings, the film gives one the impression that it teeters on torture porn, but “Hounds of Love” is really a horror drama without compromise. Filmmaker Ben Young is careful about what he shows, trusting the relative restraint and suggestion of his imagery, not to mention the viewer’s imagination to fill in the blanks, as not to sensationalize or revel in the rape and torture of Vicki for cheap exploitation’s sake. He has a graceful eye for visual composition, too, opening his film through an artfully voyeuristic gaze as a class of nubiles play volleyball and slowing down the motion to striking effect with cinematographer Michael McDermott. There are also mundane snapshots of young girls running through a sprinkler and a man mowing his lawn, made all the more disturbing by the fact that an unsuspecting young woman could be shackled and gagged in the house right down the street or even next door.

With a buzzing sound design aiding the tension, not to mention an uneasy use of Moody Blues’ “Nights in White Satin” at one point, “Hounds of Love” is chilling to watch as Vicki keeps getting backed into a corner. Ashleigh Cummings (2012's "Tomorrow, When the War Began") spends a lot of time tied to a bed, bleary-eyed and screaming as Vicki, but she fearlessly sells every helpless, panicked moment and her sense of cunning with subtlety. Stephen Curry is effectively unsavory and skin-crawling as the monstrously manipulative John, but it’s the excellent Emma Booth as Evelyn who gets the meatiest and most interesting part. She is fascinating to watch in conveying underlying insecurities, jealousy and pain that go a long way toward almost making Evelyn sympathetic—almost—as she’s quite troubled and a prisoner herself. Her relationship with John is a complex one, being with him since she was thirteen years old, and she is a mother but has lost custody of her children with another man. Whether or not hope ultimately prevails will be left up to the viewer's own experience, but the last ten minutes are agonizingly tense with the mere focus on Vicky and a knife-wielding Evelyn in the kitchen and then unexpectedly resonant with the choice of Joy Division’s “Atmosphere.” While some horror films can be momentarily effective, "Hounds of Love" stuns, disturbs, and haunts for the long haul.