DVD/Blu-ray: “Before I Fall” an affecting “Groundhog Day” for age 17 and up 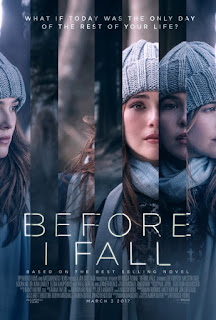 Based on a 2010 YA novel by Lauren Oliver, “Before I Wall” was made for a certain demographic—primarily 17-year-old girls with more on their mind than Snapchat—and yet it doesn’t underserve or talk down to that demo. This is, in essence, a “Mean Girls”/“Groundhog Day” hybrid, a dramatically sound teen-angst melodrama about facing one’s mortality that works on account of sensitive direction by Ry Russo-Young (2012’s “Nobody Walks”) and a strong lead performance by Zoey Deutch (2016’s “Why Him?”). It doesn’t exactly sidestep cliché but does make those clichés feel more fresh than not and actually pulls no punches when it reaches its moving resolution.

17-year-old Sam Kingston (Zoey Deutch) has her whole life ahead of her, until everything changes one day. She wakes up, excited for it to be Cupid Day at school. She gets ready and goes downstairs without giving her parents (Jennifer Beals, Nicholas Lea) or little sister (Erica Tremblay) the time of day. Best friend Lindsay (Halston Sage) picks her up and they’re off to scoop up friends Ally (Cynthy Wu) and Elody (Medalion Rahimi). At school, Sam not only gets a rose from her boyfriend, Rob (Kian Lawley), but also Kent (Logan Miller), who sits near her in class and invites her to a house party that night. She and her girlfriends end up going to the party, where Sam has planned to lose her virginity to Rob, but that all changes when social outcast Juliet (Elena Kampouris) shows up uninvited and begins taunting Lindsay who regularly calls Juliet a “psycho” and other cruel names, until Lindsay rallies everyone to throw beer at Juliet and get her to leave. On Sam and her friends’ way home down a rainy forest road, their car flips. Somehow, when Sam wakes up, it’s the same day. Though she doesn’t realize it yet (the last 24 hours could just be a dream), she really is trapped in a time loop and sleepwalks through the first repeated day, realizing that it’s déjà vu all over again. As the day progresses and ends the same way with Lindsay’s vehicle flipping after the party at the dreaded time of 12:39 am, Sam tries to tweak each moment and might become a better person because of it. Can she undo it?

As long as one can hold on to waiting for character layers to be revealed and for Sam to begin righting her wrongs, “Before I Fall” is much wiser and more affecting than the Annoying, Snapchatting Millennial introductions of Sam and her three girlfriends would suggest from the outset. They call each other “bae” and casually bully other girls who are different from them, but such is the life of being a teenage girl in this day and age. Aside from a few overly on-the-nose lines of foreshadowing dialogue—for instance, “Tonight, everything changes!”—screenwriter Maria Maggenti (2011’s “Monte Carlo”) gets to the heart of more empathetic concerns beyond the metaphysical plot gimmick. Though it’s a hell of a way to soul-search and learn a lesson, Sam finally wakes up and realizes that her friends and her have been needlessly cruel and petty to Juliet, as well as lesbian Anna (Liv Hewson), and that she’s taken her family for granted for far too long.

The cute Zoey Deutch tends to turn up in projects that don’t really deserve her, particularly the nadir of 2016 (“Dirty Grandpa”), but the material here is a better fit for this vibrant, naturally appealing talent. In her second lead role following 2014’s “Vampire Academy,” Deutch makes Sam’s shift believable from a vaguely likable but navel-gazing follower to a more compassionate and selfless leader. The rest of “Before I Fall” is solidly acted across the board, with Halston Sage getting the second most to work with as Lindsay, the de facto leader of Sam’s friends who may harbor more pain than one can see underneath her cruel charisma. Jennifer Beals almost doesn’t register at all as Sam’s mother, until a late, albeit well-earned, heart-to-heart with her daughter at a restaurant when Sam asks Mom if she thinks she’s a good person.

The repetitious nature of the narrative is part of the blueprint—in lieu of waking up to Sonny & Cher’s “I Got You Babe” on a clock radio, Sam wakes up to Big Data and Joywave’s “Dangerous” on her iPhone—but similar to how Sam tries to change the course of her days, director Russo-Young finds ways to shake up the repetition. Even when Sam relives the same events, the camera often lingers on just her, as if waiting for her to react differently compared to the first time. The film is also moodily shot in the Pacific Northwest by Michael Fimognari and pleases the ears with a recognizable alt-rock soundtrack. Though it will only seem more groundbreaking than it is to minors or those who have never seen a movie before—2004’s Ashton Kutcher-starring “The Butterfly Effect” is another underrated notch on this genre belt—“Before I Fall” still registers on its own quite well as a thoughtful teen drama with more urgency than checking one’s newsfeed on every social-media account.