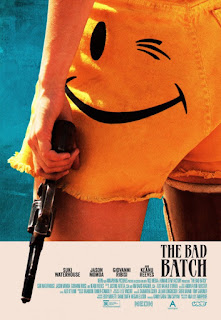 Ana Lily Amirpour instantly became a filmmaking force to watch in 2014 with her special “Iranian vampire western,” “A Girl Walks Home Alone At Night.” Unfortunately, “The Bad Batch” marks her sophomore slump, an empty exercise in style that’s not shy about its genre influences from George Miller’s “Mad Max” to any of its imitators and wannabes set in a dystopian wasteland. Amirpour puts enough of her own unique stamp on this wannabe cult item that it could only come from a single creative mind, but the film frustratingly lacks a detectable point and falls victim to self-indulgence. In many ways, it reminds one of Richard Kelly’s interestingly messy “Southland Tales.”

Deemed one of the “Bad Batch” with the number “5040” tattooed on her neck, society reject Arlen (Suki Waterhouse) is booted out of Texas and into the desert wasteland with only a knapsack of burgers and a jug of water. Just as she begins her journey, she gets chased down and snatched up by a cannibal woman on a golf cart, costing her an arm and a leg, literally. She is about to become someone’s dinner at the hands of iron-pumpers, led by Cuban muscle man Miami Man (Jason Momoa), living in an airplane wreckage, but finds refuge in the town of Comfort. Five months later, Arlen, now with a prosthetic leg, heads back out to the desert and finds one of the cannibals’ golf carts. She ends up getting a little revenge by killing a woman and kidnapping a little girl (Jayda Fink) who happens to be Miami Man’s daughter.

Continuing on the path of its opening half-hour, “The Bad Batch” might have been a fun, down-and-dirty grindhouse pic. How this divisive, post-apocalyptic world of cannibals, bodybuilders and undesirables came to be is beside the point, but watching Arlen first being on her own with the hot sun beaming down on her, fending for himself, and then being attacked and captured, a certain amount of interest is sustained. Once it evolves into half-baked ideas and an unconvincing, emotionally ambivalent relationship that should hold more weight than it does, the film goes nowhere fast.

English model-turned-actress Suki Waterhouse (2016’s “Pride and Prejudice and Zombies”) is a pretty specimen and does pull off the bad-girl persona okay as Arlen. Perhaps it fits the character, but she alternately seems a bit blank and dead behind the eyes sometimes. The pectacular Jason Momoa has a stoic, formidable presence, but it’s the out-of-nowhere relationship between his Miami Man and Waterhouse’s Arlen that the film can’t really sell. Getting more interesting as he ages, Keanu Reeves is effectively oily when he pops up as Comfort’s drug-peddling, porn-mustachioed founder known as The Dream, but like everyone else, one isn’t sure about his purpose in the narrative. Bringing up the margins as part of the film’s strange tapestry, a wordless and chameleonic Jim Carrey gets to wander the desert as a mute but wise hermit with a pushcart; Giovanni Ribisi is utterly wasted as a Comfort local with possible schizophrenia; and Diego Luna has a blink-and-you’ll-miss-him cameo as a rave DJ aboard a giant boombox on wheels.

There is vision here, but it’s not quite clear what that vision is supposed to be. It is certainly a good-looking film, full of colors even in the desert, with a killer eclectic soundtrack that includes Ace of Base’s “All That She Wants” and Culture Club’s “Karma Chameleon.” There’s just not enough “there” there, the monotone characters pretty tertiary (Miami Man might be drawn the most and that’s still being generous), but the sights are definitely bonkers, including The Dream strutting around with his pack of pregnant, rifle-toting concubines with matching T-shirts that read, “The Dream is Inside Me.” Like in her feature debut, Amirmour even finds somewhere to insert a skateboard and uses it to resourceful, amusing effect when Arlen must deal with the absence of two limbs. As is, “The Bad Batch” feels like a batch of cool, startling, weird and darkly funny parts that don’t add up to much. Keep making movies, Ana Lily Amirpour.