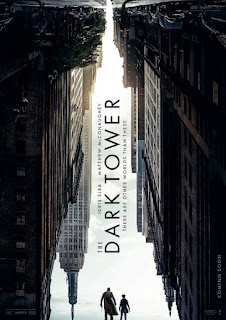 Stephen King’s eight-volume series, “The Dark Tower,” has been described as the author’s magnum opus, an amalgam of science fiction, fantasy, Western, and horror. This has been a long-gestating film project for a decade, and with such a dense mythology, it was deemed unadaptable, and apparently, it still is. As a condensed 95-minute feature film with a modest $60 million budget, “The Dark Tower” feels cobbled together, cut off at the knees with little room to breathe, and never epic in scope as it should be. There are traces of the film it could have been and should have been, but unfortunately, fans and the uninitiated are stuck with the film that it is. It may not be a complete disaster, but calling it not the worst King adaptation doesn’t make it any less mediocre.

11-year-old Manhattan boy Jake Chambers (Tom Taylor) dreams of an alternate dimension, but his mom (Katheryn Winnick) and his cold stepfather (Nicholas Pauling) think the death of his fireman father (Karl Thaning) has made him mentally unstable. When he evades a pair of psychiatrists who are actually monsters from this other world in human form, Jake escapes and finds an abandoned Brooklyn house that holds a portal, thrusting him into the post-apocalyptic Mid-World. He finds a guide in a gunslinger named Roland (Idris Elba), who lost his father (Dennis Haysbert) in trying to protect the tower from Walter (Matthew McConaughey), the Man in Black. As it turns out, Jake is really one of many gifted children with "the shine” (read: psychic power) who can bring down the tower positioned at the center of the universe.

Technically sturdy but grievously truncated and streamlined, “The Dark Tower” starts off well with promise in Keystone Earth a.k.a. New York City before Jake actually enters the portal into Mid-World. From there, everything else is a surface-level rush job. Writer-director Nikolaj Arcel (2012’s “A Royal Affair”) and screenwriters Akiva Goldsman & Jeff Pinkner and Anders Thomas Jensen have brevity on their side, but it actually hurts this particular cinematic treatment; the film alternately moves quickly and dashes off plot points and supporting characters that should probably matter. A presumably once-commanding vision of Stephen King’s saga is detracted by half-baked world-building, abridged beats, and generic action scenes with too much CGI.

Jake Chambers is decidedly the protagonist of the story and the one with an arc, and newcomer Tom Taylor is a natural and confident choice. Idris Elba is a magnetic, charismatic presence, and while he is able to bring a quiet gravitas to even the taciturn Roland, the role is so one-note that it’s hard to tell if the actor’s heart is even in it. Even a few light moments of fish-out-of-water humor fall flat, like Roland not knowing what a hot dog is before taking a bite. As if he’s channelling Christopher Walken’s Gabriel in 1995's “The Prophecy,” Matthew McConaughey seems to be relishing the role of Walter/The Man in Black, cutting a potentially delicious villain with swagger and hamminess but little actual menace.

With the rumors of reshoots and failed test screenings, there were plenty of red flags, and unfortunately, they were true. Having no stake in whether or not this is a faithful adaptation of the source material, that shouldn't make or break the success of a film because all that matters is what made it to the screen. Alas, "The Dark Tower" is irreparably unsatisfying, and if it doesn't properly introduce the uninitiated to this world and doesn’t faithfully adapt the book for purists, who is it for exactly? Little Easter Eggs to King’s multiverse are fun to spot here and there but don’t mean anything in a larger context. Someone walks a St. Bernard (“Cujo”); there’s a photo of the Overlook Hotel (“The Shining”), a toy 1958 Plymouth Fury (“Christine”) and an abandoned amusement park named Pennywise (“It”). It’s too bad that the finished product feels like a middle-of-the-road pilot to a TV series that won’t get picked up.