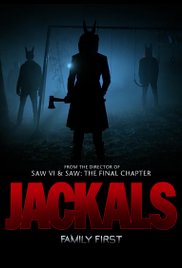 Home-invasion movies are some of the most dependably terrifying because, unlike ghosts and monsters, someone intruding our personal domain happens in the real world. As so many other movies of this ilk have come down the pike—2007’s “Them,” 2008’s “Funny Games” and “The Strangers,” 2011’s “Kidnapped,” 2012’s “Mother’s Day,” 2013’s “The Purge” and “You’re Next,” 2016’s “Intruders," “Don’t Breathe,” and “Hush,” just to name a few—it’s hard not to feel a sense of redundancy when a new one wants to join the club. For a siege horror-thriller with a cult angle, “Jackals” surely does what it needs to do. It’s efficient, nasty and tightly wound, but it’s also so familiar, almost bordering on plagiarism, and concludes with no catharsis, relief, or hope of any kind. One’s mileage will certainly vary, but in this case, the getting-there is the destination all the way. If audience members are willing to subject themselves to being thrown into a hopeless abyss, this standard-issue home-invasion slasher isn’t half-bad.

At her family’s remote cabin in the woods, Kathy Powell (Deborah Kara Unger) awaits the arrival of her son, Justin (Ben Sullivan), who left his family to join a murderous cult. Keeping her company are self-involved son Campbell (Nick Roux) and Justin’s girlfriend Samantha (Chelsea Ricketts), along with Justin’s infant daughter. Not much later, Justin arrives involuntarily with his father, Andrew (Johnathon Schaech), with whom Kathy is divorced, and Jimmy (Stephen Dorff), who was hired by the Powells to deprogram Justin. Once Justin is brought in and tied up to a chair, the family hopes to snap him out of his warped state, while Jimmy makes it his mission to break him down. As soon as night falls, everyone inside the cabin is lined up for the slaughter when Justin’s “other” family comes for him and will do anything to get him back. Did the Powells think that the cult wouldn’t come looking for him?

Before the main carnage commences, the film opens on March 24, 1983 from a masked killer’s POV, shot in one unbroken take, as a home invader makes his way into a family home, stands over them in their beds and then slaughters the family of three with a pair of scissors. It sure grabs the viewer’s attention, but it isn’t anything we haven’t seen before already in 1978's "Halloween," 1986's “Manhunter” and 2012's “Sinister.” Most of “Jackals” is like that, however, director Kevin Greutert (he of the allegedly final two “Saw” movies and 2014’s Bayou-set chiller “Jessabelle”) stages most of it pretty effectively anyway. Cinematographer Andrew Russo lends dread and creepy atmosphere to the isolated, supposedly idyllic setting, and the cult members, all hiding behind animal masks, a la “You’re Next,” are certainly menacing and mean business. The family inside the cabin is outnumbered but rather resourceful, crafting makeshift weapons out of knives and putting hot oil on the stove in case the cult members make it inside. Until one gets the sense that the Powells are ultimately doomed and have no chance against the unstoppable cult, the film ekes out some very tense moments, as the family members nervously wait for the intruders to pounce.

Written by Jared Rivet, the film, apparently based on true events (or so the title card says), quickly sets up the situation at hand. Had the script cared to flesh out how Justin, now going by “Thanatos,” got involved with his new “family” and what drew him into their way of thinking, the final product might have been better for it and packed even more of an emotional punch. Given the life-or-death circumstances, there isn’t a lot of time for character development, despite that of the expository variety, but the actors are all solid—particularly Deborah Kara Unger and Johnathon Schaech as a divorced couple with pent-up tension—and find ways into making their characters almost seem like more than just pigs for the slaughter. “Jackals” borrows the most from “The Strangers,” but when a derivative B-horror tale can still hold its tension for the length of its running time, it’s at least following through on its aim.