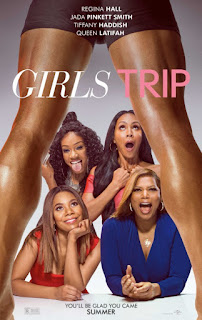 It is only fair that women get the chance to behave badly and not be judged for it, and after the most recent female-centric comedy “Rough Night,” “Girls Trip” once again cheerfully revels in wildly outrageous behavior among gal pals on vacation. Blue-humored and boisterously funny, the film is a true crowd-pleaser that rides on the effortless, gangbusters chemistry and infectious energy of its four appealing leads and earns every single one of its laughs. Director Malcolm D. Lee (2013’s “The Best Man Holiday”) lets his cast sell the bawdiest, most over-the-top of gags, while championing female sexuality and the unbreakable bond of sisterhood. Things get heartfelt in the home stretch, but even the sentiment feels as earned as the comedy without turning artificial or coming across as contrived. “Girls Trip” was the surprise hit of the summer in theaters and it will surely endure as a girls’ night-in.

Having not seen her college girlfriends—“The Flossy Posse”—in five years, successful self-help author and lifestyle guru Ryan (Regina Hall) decides to invite them all on a trip to New Orleans when she’s chosen as the keynote speaker at the Essence Festival. Time has changed for most of them: Lisa (Jada Pinkett Smith), once the life of the party, is now a frumpy, divorced single parent of two, always prepared and always on a schedule; Sasha (Queen Latifah), a former journalist, now works as a celebrity gossip blogger and her fabricated stories are no longer paying her bills; and the group’s risk-taker, Dina (Tiffany Haddish), is still a brash, sexually voracious force of nature who wasn’t born with a filter. When a paparazzo sends Sasha a photo of Ryan’s ex-NFL star husband, Stewart (Mike Colter), who also serves as part of Ryan’s brand, making out with a younger woman, these old friends aren’t about to let one of their own get walked all over.

Written by Kenya Barris (TV’s “Black-ish”) & Tracy Oliver (2016’s “Barbershop: The Next Cut”), “Girls Trip” follows a familiar route, as all four women have their own interpersonal dilemmas, but Ryan, Lisa, Sasha, and Dina are all fleshed out beyond types and resemble real human beings the viewer can be invested in. Regina Hall, who has always been a comedic standout ever since the first "Scary Movie" spoof, solidly grounds the film as Ryan, whose best-selling book “Having It All” differs from her reality, while Jada Pinkett Smith and Queen Latifah get their time to shine with the comedy (they sneak in a terrific reference to “Set It Off,” which co-starred Smith and Latifah) and land the dramatic moments. They are all lovely and wonderful, but the dynamite secret weapon is Tiffany Haddish (2016’s “Keanu”), a stand-up comedian but the lesser-known of the four, and this is her scene-stealing, revelatory moment. Like Melissa McCarthy in "Bridesmaids" and Kathryn Hahn in "Bad Moms," Haddish is an uproarious, uninhibited breakout star as the potty-mouthed, line-crossing, scene-causing Dina. When this comic dynamo gets to be unleashed, she is a go-for-broke gas; what Haddish does with a banana and a grapefruit as an oral sex tutorial is shockingly, hilariously pornographic and burned into one's memory. Even if Dina is the broadest of all four ladies and around for shits and giggles, she is decent and fiercely loyal when it comes to her friends. In supporting roles, Larenz Tate is innately charming as Ryan’s untapped romantic interest and Kate Walsh steals laughs as Ryan’s agent Liz, who uses colloquial slang to seem hip.

“Girls Trip” features a hallucinatory absinthe trip, public “golden showers” on a zip line between two French Quarter bars, and a sexual encounter with a hunky 21-year-old’s fearsomely lengthy appendage. It may not be afraid to deal in filth and embrace its R rating, but similar to the like-minded "Bad Moms," none of the hedonistic stuff would work as well without a likable, lived-in dynamic between these four ladies who make us believe they could be the closest of friends in real life. There is, indeed, a sweet core and a warm heart beneath all of the raunchy naughtiness. “Girls Trip” is a full two hours, but that only means that we get to spend even more time with the Flossy Posse.