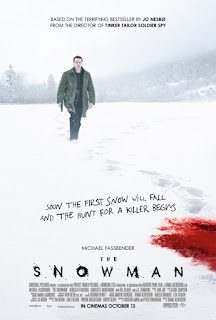 The first (and presumably last) adaptation of one best-selling novel in Norwegian author Jo Nesbø’s crime series following policeman Harry Hole, “The Snowman” could have been, at worst, a standard-issue but watchable and reasonably involving investigative procedural and whodunit. Despite top-notch talent on both sides of the camera—Michael Fassbender and Rebecca Ferguson star, Tomas Alfredson (who made 2008’s sublime “Let the Right One In” and 2011’s less-than-sublime but still sturdily crafted “Tinker Tailor Soldier Spy”) directs, and Martin Scorsese executive produces—the reality of it is actually a disaster unfit for release. No one sets out to make a bad movie, but this is an example of a film that has obviously been through extensive reshoots and cuts after a tight production schedule left 10-15% of the script unfilmed that the finished product resembles nothing short of a half-finished muddle. With results this shockingly calamitous, director Alfredson and screenwriters Peter Straughan (2015’s “Our Brand Is Crisis”), Hossein Amini (2011’s “Drive”) and Søren Sveistrup (TV’s “The Killing”) have instantly melted away any chance of turning the rest of Nesbø’s crime fiction into future cinematic projects. Something was definitely lost in translation because this final cut can’t possibly be the riveting cat-and-mouse thriller anyone signed up for, not even ticket-buyers.

Oslo police detective Harry Hole (Michael Fassbender) is such a grizzled, tortured drunk that he wakes up hungover and shivering in park shelters and on benches. He wants to be in the lives of both ex-girlfriend Rakel (Charlotte Gainsbourg), who’s now dating Dr. Mathias (Jonas Karlsson), and her troubled teenage son Oleg (Michael Yates), but Harry is too unreliable to commit. After being under suspension, he is now ready to take on a new case, just as he receives a handwritten letter that addresses him as “Mister Police” and is signed with a childlike snowman drawing. Enter Katrine Bratt (Rebecca Ferguson), a new recruit who’s transferred from Bergen and still seems to be holding onto a case that’s quite personal. Harry soon partners up with Katrine on a missing persons case that turns into a grisly murder investigation where the serial killer dismembers women’s heads with a wire and stacks them on top of a snowman. Can Harry and Katrine find the elusive Snowman killer before another head is found?

Dense and jerry-built with puzzle pieces that pile up but never cohere or satisfy, “The Snowman” is not only choppy, hopelessly convoluted and unfocused but awkwardly directed and dismayingly dull. If this snowbound “The Silence of the Lambs” wannabe wanted to thrill or chill, it fails. If it attempted to pull off a thematic throughline about fatherless children, it fails there, too. The idea of a serial killer stacking a severed head atop balls of snow is certainly unnerving, but director Tomas Alfredson squanders it and makes allegedly foreboding cutaways to the killer’s Frosty-like calling card look just plain silly. That’s just the tip of the iceberg. Following a promising prologue that clumsily spirals out of control, the first act that attempts to set everything up fails to create the urgency it should, and the next two acts never improve. The plot proper is continually rendered disjointed by sloppily inserted flashbacks, while subplots that don't matter are maximized and subplots that should matter are minimized. The film goes down so many blind alleys, one involving a naughty “pregnancy doctor” (David Dencik) who screams “red herring” because he paints his toenails red (don’t ask), that it's difficult to remain engaged in any of it and not feel enraged when the whole enterprise never amounts to anything but lumpy storytelling.

Michael Fassbender chain-smokes and looks sleepy without ever making Harry Hole compellingly damaged or even accessible. The viewer is informed that he’s a brilliant gumshoe and an addict who can’t make room for a family, but discoveries just sort of fall into his lap and he only seems to be addicted to nicotine. Lest one think the mind has to be in the gutter to mention what is wrong with the character’s name, “Harry Hole” is hard to get past. Rebecca Ferguson seems stripped of her magnetic presence that was showcased in previous films, and though she does fine with what she’s given, the layers to Katrine Bratt are confined by the supposedly twisty script, and by the end, she doesn’t get the closure she deserves.

In negligible roles that were either trimmed in the editing process or just somehow drew overqualified performers, an impressively amassed roster of actors is criminally wasted. Chloë Sevigny appears as a set of twin sisters, one of whom is on screen long enough to chop off a chicken’s head and exit the film after having her own head sliced off, while the surviving one disappears too quickly. Toby Jones has a glorified cameo, showing up long enough for one to shout, “Hey, it’s Toby Jones!” as a Bergen policeman; James D’Arcy puts on his suspect face as the jilted spouse of one of the missing women; J.K. Simmons at least has shady fun with his Nordic accent as a lascivious politician hosting a gala for the Winter Sports World Cup and possibly running a human-trafficking ring; and Charlotte Gainsbourg really does look like she has no idea what she’s doing here as Henry's ex-lover, and the less said about her fully clothed “sex scene” with Fassbender, the better. Finally, in the wonkiest of turns, Val Kilmer shows up in flashbacks nine years earlier as another alcoholic detective who may be connected somehow in this jumble. Appearing with his face seemingly frozen and his voice so inexplicably redubbed that it becomes a jarring distraction, Kilmer might have been recovering from oral cancer and one wishes him well, but why wasn't the part just recast or why weren't his scenes just scrapped altogether?

“You can’t force the pieces to fit,” Harry says to Katrine at one point that viewers wouldn’t be blamed for thinking he was breaking the fourth wall and aptly commenting on the haphazard structure of the film itself. Veteran editors Claire Simpson and Thelma Schoonmaker seemed to have had their own mystery to solve, doing everything they could to piece scenes together like a jigsaw puzzle. Riddled with so many baffling choices and moments of misdirection, "The Snowman" struggles to find any direction at all. There are films that spoonfeed audiences and films that make audiences do the legwork, but this one doesn’t even drop any clues to allow one to become invested in the case or go along with Harry and Katrine in finding the killer. Once it’s time for the identity of the Snowman killer to come out and be presented as what Roger Ebert coined as "the talking killer" cliché, one has long stopped caring that the reveal prompts an unsurprised shrug rather than a shock. The climactic face-off then throws in the most inanely contrived deux ex machina on a frozen pond that would only work if the killer were blind, or if it happened by an act of God, or maybe the filmmakers knew they had a mess on their hands and were just desperate to get it over with. If there’s any credit to be given, Dion Beebe’s lensing of Norway's frigid landscapes is often quite striking and moody. Unfortunately, not even a little visual competence can make “The Snowman” any less of an abominable slog. It is easily the worst studio release of 2017, thus far, and the year is almost over.