Honey, I Shrunk Myself: "Downsizing" starts out sharp and then loses its way 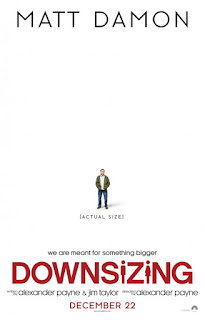 “Downsizing” has such a crackerjack premise—it’s not about corporate layoffs—that there is no way it could miss as a piece of loopy absurdism through filmmaker Alexander Payne’s compassionate yet satirically sharp lens. Visually and thematically, it is Payne’s most audacious and, subsequently, the most wildly uneven in his oeuvre. Beginning as a social satire about the double-edged sword of making the planet a better place and then meandering after that, the film seems unclear of its own vision and leaves more intriguing possibilities untapped. In a way, “Downsizing” becomes like any blasé mid-life crisis drama where a sadsack character learns valuable life lessons, no matter his size. Payne’s films usually remain small and grounded, but this departure takes “small” to an extreme and eventually goes astray.

Norwegian scientists have discovered a breakthrough with shrinking lab mice, and over the course of a decade, they find an environmentally friendly solution to the threat of overpopulation and waste by shrinking a large group of people and forming a small colony. Five years later, the general public is now open to undergo the irreversible procedure of “downsizing,” where they shrink down to five inches, live lavish, if inexpensive, lives and reduce their carbon footprint. Residing in Omaha, mild-mannered occupational therapist Paul Sefranek (Matt Damon) and wife Audrey (Kristen Wiig) live in Paul’s late mother’s house and struggle financially in the tough economy. When they witness the “downsizing” success of former classmate Dave Johnson (Jason Sudeikis) and his wife Carol (Maribeth Monroe) at their high school reunion, Paul and Audrey choose to “get small” and check out the popular small community of Leisureland, which ensures that “the grass is greener.”

For its first forty-five minutes, “Downsizing” settles into a pointed satire, promising Alexander Payne’s low-key, humanist sensibilities and flair for sharp writing to unfold within an ingenious concept that falls into science fiction. When the film is at its best, it’s during the early scenes where Paul and Audrey visit a center that showcases everything Leisureland has to offer if they decide to downsize. The details are amusing, from a tiny spokesperson (Neil Patrick Harris) giving his audience an open house to his miniature McMansion and his wife (Laura Dern) bragging about buying a matched set of diamond jewelry for only $83, and the entire “shrinking” process is fascinating to watch, as Paul, among others, is waxed from head to toe and has his teeth extracted. Visual gags involving an oversized Saltine cracker and a giant rose are also cute. Once Paul ends up taking the plunge and Audrey gets cold feet around the time she has her head shaved, his miniature life in Leisureland leaves a lot to be desired, including the noisy parties in the upstairs apartment hosted by Serbian party animal Dusan Mirkovic (Christoph Waltz). He then meets Ngoc Lan Tran (Hong Chau), a Vietnamese dissident-turned-housekeeper who smuggled herself into the U.S. in a TV box and had to have her leg amputated in the process. From there, the script, co-written by Payne and old collaborator Jim Taylor, loses its way and never fully recovers by the time our characters visit the Norwegian fjords.

If Matt Damon plays Paul Sefranek as the character was written, he is fine as a sincere everyman and a conduit into the world of “downsizing.” Though Ngoc Lan Tran initially comes across as a broad Vietnamese caricature speaking in a broken-English accent that audiences are intended to laugh at, Hong Chau makes the bossy, brusque character a sweet, endearing and original creation. As the voice of reason for Paul who opens his eyes to the inequality that remains in the small world, she fuses tender vulnerability and humor, most memorable of all being her question of what kind of “fuck” she had with a male character. Kristen Wiig is fine with what she’s given as Paul’s wife Audrey, but then her character disappears, never to be seen again. As Paul’s neighbor Dusan, Christoph Waltz makes the most of the one-note role and just has to smile widely for a laugh.

“Downsizing” doesn’t fail to surprise and Payne’s humane worldview still shines through, but as the story evolves, it just shrinks in imagination and stops holding the viewer's engagement. It ends up becoming a preachy parable about climate change and mankind destroying the planet and an unconvincing spiritual journey for Paul. For the first time, Payne seems unfocused, as if he wants to unpack so many ideas rather than hit the target on one idea. What "Downsizing" conceives at the onset is such a fresh "what if?" that it's unfortunate when the freshness fritters away in exchange for a gentler, far less interesting package.