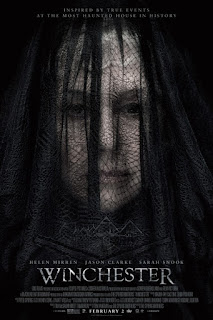 Rich in detail and history, San Jose, California's Winchester Mystery House (now a popular tourist haunt) is prime real estate for a grandly spooky Gothic haunted house tale. Its owner, Sarah Winchester—the widow of a firearm manufacturer and heiress to the Winchester Repeating Arms Company—turned her residence into a Victorian mansion of sprawling, labyrinthine architectural wonder with more than a hundred rooms, secret passageways, and doors and staircases that lead to nowhere. Naturally, the house is claimed to be haunted by the tortured souls of those killed by the Winchester rifles, so Sarah spent years adding additions to her estate, reconstructing the rooms the spirits died in, and then containing them in each room with every door sealed off with thirteen nails. If that sounds like a doozy of a premise with an excellent location and a classy Oscar-winning actress playing Sarah Winchester, then why is “Winchester” so dull and hokey?

It’s 1906 when a San Francisco psychologist, the grieving, opium-addicted Dr. Eric Price (Jason Clarke), is employed by the board of directors of the Winchester Repeating Arms Company, who feel Sarah Winchester (Helen Mirren) needs a psychological assessment in order for her to keep the fortune she has inherited. Arriving to the estate, Eric is introduced to the unusually designed house by Sarah’s niece, Marion (Sarah Snook), who lives there with her young son Henry (Finn Scicluna O’Prey) and asks Eric to respect her aunt's rules by remaining in his wing of the house. After meeting Sarah at dinner, he gets down to business, examining her in hopes of giving her a clean bill of health. The loss of both her husband and daughter has taken quite a toll on her, but has it pushed Sarah into madness and into believing that her house is cohabited by the ghosts of men whose lives were taken by her namesake rifle? As Eric begins snooping around the house at night as Sarah’s workers expand and renovate around the clock, he begins to realize that Sarah is not insane.

Opening with a retro title card that promises something in the Hammer Film vein, “Winchester” has two star attractions—Dame Helen Mirren and that house—and never uses either one to even half of their respective potential. Sarah Winchester is oddly more of a supporting character here, as the story is told more from the point-of-view of Dr. Eric Price, who harbors some demons of his own and cannot be sure if the strange entities he sees are real or just hallucinations from his altered state, and the house never becomes more than a decorative setting with little time afforded to satisfactorily marvel at every nook and cranny. The screenplay by Tom Vaughan and directors Michael and Peter Spierig (2017’s “Jigsaw”) comes off perfunctory, using the personal demons of both Sarah and Eric as surface-level shading for an achingly overfamiliar paranormal story. And despite having the capable Spierig Brothers at the helm, the film commits the cardinal sin of any movie, let alone a horror movie: it’s boring.

Now checking the horror genre off her filmography, the fabulous Helen Mirren is incapable of not bringing gravitas to a role, even one that gives her vastly less to do than Lin Shaye in the “Insidious” films and mostly has her walking around with a black veil and convincing Dr. Price that ghosts exist. It’s a minor point, but there are several close-ups of Mirren that are distractingly shot in soft-focus for no good reason. Meanwhile, Jason Clarke has to carry the story and does what he can with the material as Eric Price, who has lost his wife to suicide and numbs his emotional pain with alcohol and opium, but his emotional arc isn’t imbued with the proper amount of interest or impact that’s needed. As Sarah's niece Marion, Sarah Snook (who was such a spellbinding find in the Spierig Brothers' 2015 time-traveling sci-fi yarn "Predestination") gets a final moment to assert herself as a mother, but she is mostly relegated to look for her missing son in the middle of the night with an oil lamp.

Handsomely produced with the house itself a triumph of textured, atmospheric production design, “Winchester” still relentlessly suffers from a lack of inspiration and chills. The level of dread is curiously low, and a scene where Sarah must evade her possessed, rifle-wielding great-nephew from behind her narrow, low-rise switchback stairs is the only one that registers anything resembling tension and threat. The jack-in-the-box scares, most of them heavy-handed false alarms, are so calculated that the payoffs are easy to time one’s watch to and, thus, ineffective, save for maybe one crafty jump moment involving a rotating mirror. Genre clichés can be refreshed if an inventive spin is taken, but here, the possession of a red-haired moppet is more silly than creepy, and each time another corpsy specter reveals itself by popping into frame, it isn't so much fearsome as it's just an actor in make-up performing a parlor trick. By the time the finale brings out the special effects and ramps up the noise, the film has already petered out. Standing in the shadows of other supernatural horror films of this ilk, “Winchester” is a creaky misfire with little going for it beyond window dressing. Taking in a tour of the Winchester Mystery House or just reading up on it would be more fun and fascinating.