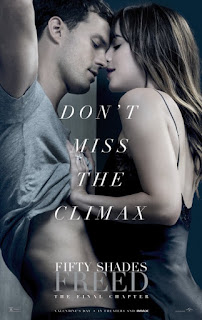 The big-screen adaptations of E.L. James’ erotic literary trilogy are a frustrating bunch. 2015’s “Fifty Shades of Grey,” as directed and written by women, seemed to acknowledge the absurdity of James’ prose, while still trying to take the dom-sub relationship between Christian Grey and Anastasia Steele seriously, and made a star out of Dakota Johnson. 2017’s “Fifty Shades Darker,” with directing reigns given to director James Foley and writing duties to James’ husband Niall Leonard, was slightly sexier but soapier and more episodic, and it never went dark enough. Now, 2018’s “Fifty Shades Freed,” again directed by Foley and written by Leonard, is the interminable climax, so to speak, but not much actually matters because nothing can come in between Ana and Christian’s playtime cued to a Shazam-worthy pop soundtrack. Excluding the sexual fantasy of the S&M angle, this third and final film is just an insipid soap so bankrupt of conflict and tension that it has to throw in a car chase, arson, blackmail, a kidnapping, and a ransom. It just goes to show that this series was too thin and vanilla to ever warrant a trilogy when it's not exactly about the greatest love story ever told.

As “Fifty Shades Darker” kept ending with coda after coda, it finally concluded with Ana’s handsy, disgraced ex-boss Jack Hyde (Eric Johnson) standing at the edge of a lake from Christian’s family home as fireworks ignite the sky, burning a cigarette through Christian’s face of a family photo. Now, BDSM-practicing billionaire Christian (Jamie Dornan) and the once-mousy Anastasia (Dakota Johnson) are officiated as Mr. and Mrs. Grey (like the fourth “Twilight” saga, this film commences with the wedding). After their honeymoon, Ana returns to work, being promoted to fiction editor at the publishing house Christian owns. When the kinky couple isn’t vacationing to Aspen, talking about having a child, and playing slap and tickle in the Red Room of Pain, a wrench in their lavish life comes in the form of Jack Hyde, who slinks around, with an incognito female as his accomplice, bent-on destroying the Greys’ lives.

What “Fifty Shades Freed” sees as drama, rational human beings will see as the fundamentally problematic relationship between a smart, independent, career-driven woman and her needy, unreasonable, possessive yet affluent and hunky husband. While Christian still has control issues (and can’t even cook on his own), Ana is now fully in charge this time, even as a submissive. She is direct and full of moxie. Understandably, she hasn’t yet changed her last name on her e-mail address from Steele to Grey, so Christian irrationally barges in on a meeting Ana is having with an author (Tyler Hoechlin). It is a satisfying moment when Ana even puts flirty architect Gia Matteo (Arielle Kebbel), who’s designing their home, in her place by firmly telling Gia to address her as Mrs. Grey and to keep her hands to herself. Ana also finally gets a scene with her friend and former roommate, Kate (Eloise Mumford), when they meet for martinis, but she gets punished for that by Christian, who has hired her a bodyguard, Sawyer (Brant Daugherty), and wants her protected at all times. Ana’s best moment, though, comes when she gives Christian the silent treatment and hurriedly gets ready for work but takes the time, while topless and putting on pantyhose, to tell her husband, “You are not a kid anymore, you need to grow the fuck up.”

Dakota Johnson, yet again, brings her charm and tip-top comic timing to a film that doesn’t deserve it. When Ana’s bodyguards tackle Jack Hyde, who breaks into her and Christian’s apartment and threatens her with a knife, neither one has handcuffs on their person to restrain him, until Ana chimes in that her and Christian might have some handy. As the stoic Christian Grey, Jamie Dornan seems a little more life-like this go-round, being directed to loosen up somewhat, but he is still all abs and no substance, as the script has given up on trying to make sense of him or enlighten the viewer on his psychological issues. Oh, but Christian does get to sing Paul McCartney’s “Maybe I’m Amazed” at the piano, so maybe he is sensitive after all. The overqualified supporting cast gets even less to do than before: Marcia Gay Harden congratulates her son and daughter-in-law at the beginning and then comes back for a few words of wisdom, while Jennifer Ehle still gets a credit for playing Ana’s mother but only gets a wordless cameo.

“Fifty Shades Freed” is good-looking without being any good. For what it’s worth, the sex scenes are vaguely steamier than before, particularly on a kitchen table where Ana and Christian have a ménage à trois with a pint of ice cream. When the film strays from the matters of the heart, sexual trysts, and lavish vacations, it feels like padding on padding, not unlike a feature on Cinemax After Dark. So inconsequential and laughably tacked-on, the thriller plot with Jack Hyde (and a female partner whose identity is never a mystery) is about as forced as a fake orgasm and then peters out pretty quickly. Also, before the film says, “Laters, baby,” and closes on its calling-card song (Ellie Goulding’s “Love Me Like You Do”) and a montage of Ana and Christian’s evolving love story from the previous films, information about Christian’s past comes so late that it’s treated as a footnote. Now that Dakota Johnson is freed of her "Fifty Shades" contract, she can continue using her lovely presence in better movies. As for Ana, she is better off saying her safe word, “red,” and then filing for divorce and focusing on her career.