Island of Misfit Dogs: Emotionally distant or not, "Isle of Dogs" still a marvel of wit and detail 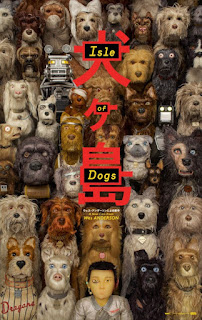 After a four-year hiatus of not releasing a film, writer-director Wes Anderson (2014’s “The Grand Budapest Hotel”) presents his second foray into stop-motion animation, following 2009’s “Fantastic Mr. Fox,” where he reshapes and heightens reality to his specific dollhouse aesthetic. Outside of his live-action efforts, which post-“Rushmore” sometimes came off as smug, stilted artifice with all arch, quirky art direction and no beating heart, “Isle of Dogs” stands as Anderson’s purest vision. Unmistakably emblazoned by the auteur’s signature tone and form, the film is so painstakingly designed and full of witty details by the second that it’s worth recommending (even to cat lovers) as a marvel of impressively studied craft and puppetry.

In Japan’s Megasaki City, the cat-loving Mayor Kobayashi (voiced by Kunchi Nomura) has set off an alarm of fear about a potential outbreak of “dog flu” and “snout fever,” exiling all dogs to the wasteland of Trash Island. One of the first banished canines, Spots (Liev Schreiber), happens to be owned by Kobayashi’s nephew, 12-year-old Atari (Koyu Rankin). Five years later, Atari takes a plane and crash-lands on Trash Island to search for his beloved pooch. The little pilot finds a gang of dogs—Rex (Edward Norton), King (Bob Balaban), Boss (Bill Murray) and Duke (Jeff Goldblum)—who scavenge for scraps and fend off aboriginal cannibal dogs, along with wary stray Chief (Bryan Cranston), who all agree to help Atari in his quest. Meanwhile, on the mainland, Kobayashi declares Atari dead and plans to exterminate all dogs on Trash Island, but blonde-Afroed American exchange student Tracy Walker (Greta Gerwig) sets in motion a resistance against Kobayashi's law.

During the opening credit sequence with composer Alexandre Desplat’s excellent score expressed through stop-motion animated kitano drummers, “Isle of Dogs” informs with a title card that “all barks have been rendered into English,” while all Japanese characters speak their own languge without subtitles but are sometimes translated by Interpreter Nelson (Frances McDormand). Wes Anderson’s clear attempt at cultural appropriation will have a mixed response, but one hopes his approach comes more from a place of love and sensitivity. From a story Wes Anderson wrote with Roman Coppola, Jason Schwartzman and Kunichi Nomura, the film is certainly an immigration parable—and not really one for children—with a fear-mongering dictator deporting all caged dogs to a concentration camp-like island. Being the filmmaker’s most political film since, well, ever, there is a conversation to be had on how Anderson handles cultural differences.

Again, what everyone can agree on about “Isle of Dogs” is the visual meticulousness. Like watching a pop-up book unfold, the amount of rough-hewn texture and detail brought to each frame is astounding, from a graphic sushi-making sequence, to canine rumbles obscured by mushroom clouds, to a trip through an incinerator. Bringing an amusingly deadpan energy to those images is the top-notch vocal cast, filled with Wes Anderson regulars and newbies and all of them exchanging the kind of rhythmic banter heard in anything with the Anderson stamp. Some of the most quiet yet offbeat moments involve Chief’s meet-cute and meet-again with comely former show dog Nutweg (Scarlett Johansson), who reinacts her tricks but asks Chief to picture the fiery bowling pins that she’s pretending to juggle.

It probably isn’t a coincidence that, if spoken quickly, the title, “Isle of Dogs,” sounds like “I love dogs,” because on the surface and at its core, this is a story about a boy and his dog, the loyalty of man’s best friend, and how pet owners rightfully humanize their animals. Animated films are more than capable of being emotionally stirring—Pixar has that department covered—but for some reason, this one mostly keeps the viewer at a distance. Although tears roll down the faces of many of the glassy-eyed characters—both canine and human—that same level of emotion doesn’t quite translate to the viewer as much as it should. It’s not that “Isle of Dogs” is unfeeling, but it is much easier to be enamored with the artistry and obsessive care on display than to be moved by the storytelling. Though not as perfect as its aesthetics, this is very much a delight that will make dog owners everywhere give their tail-wagger a big hug when they get home.