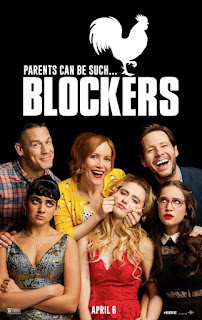 Indeed, parents stopping their daughters from following through on a sex pact on prom night sounds like a sleazy and/or ridiculous foundation for comedy, but “Blockers” (the image of a rooster stands in for the excised prefix) ends up being surprisingly smarter and sweeter than most R-rated studio comedies. Flipping the script on the horndog sex comedy by changing out boys for girls is no longer that revolutionary, and it is, thankfully, never as smutty as 1981’s “Porky’s” but more in the tradition of 1999’s “American Pie” and 2007’s “Superbad.” First and foremost, this is a riotously good time that delivers the comic goods, both of the gleefully crass and wildly physical variety, but amidst all of the ribald antics, there is a heart at its core in a story fundamentally about parents having to let go in order for their teenage children to experience a high school rite of passage. Helping matters a great deal is that Kay Cannon (screenwriter of all three “Pitch Perfect” movies) makes her directorial bow, bringing a much-needed feminist point-of-view to the material and making sure truth and charm are never missing in “Blockers.”

As prom night fast approaches, best-friends-since-kindergarten Julie (Kathryn Newton), Kayla (Geraldine Viswanathan) and Sam (Gideon Adlon) make a pact to all lose their virginity when Julie announces that she’s going to have a special night with boyfriend Austin (Graham Phillips). When their parents, single mom Lisa (Leslie Mann), overprotective Mitchell (John Cena) and perpetual screw-up Hunter (Ike Barinholtz), get wind of their daughters’ #sexpact2018 from a left-open laptop of text messages and hard-to-decipher emojis, they will have to jump through a lot of hoops to find their girls and stop them before they get the chance to deflower themselves.

As written by Brian Kehoe and Jim Kehoe, “Blockers,” itself, never judges the teenage girls wanting to get laid and ultimately comes across sex-positive. This is as much the girls’ story as it is their parents’ story, and yet the film must hit its raunchy marks. The comedy is certainly crude, featuring a projectile vomit gag in a stretch limo and below-the-waist shots of Gary Cole that one can’t ever unsee, and luckily, there are more hits than misses here. Speaking of Gary Cole, he and Gina Gershon show up as Julie’s boyfriend’s kinky parents in a sequence that could count as a non-sequitur, and with the use of subtitles during a naughty sex game of blindfold that the three blockers walk in on, it’s an inspiredly carried-out bit. The wacky shenanigans that the parents and daughters get themselves into are tonally at odds with the sensitive final moments that one can feel the gears grind a bit, but the level of pathos is so sneakily touching, particularly when Hunter and Sam have a heart-to-heart, without feeling overly forced.

As parents, Lisa, Mitchell and Hunter might be out of touch, going to great lengths to find their daughters’ whereabouts by breaking and entering someone’s home to find a phone, but their hearts are in the right spots. Leslie Mann is not only a wonderful comedian, as proven in her stealthy escape out of a hotel suite without being detected, but she also makes Lisa real and sympathetic, as she frets about her daughter leaving for college, even though she’s oblivious to Julie being accepted to UCLA, and doesn't want her to make the same mistakes she did. Building a cottage industry out of being the best in show in “Trainwreck” and “Sisters,” John Cena gets co-lead duties as Mitchell, and he’s game for anything, particularly when taking one for the team in a butt-chugging battle against a house-partying bro. Even if he shows his lack of experience as a dramatic actor during the more heartfelt moments, Cena still comes across as a muscle-bound sweetheart who struggles with seeing his tomboy daughter grow into a young woman with whom he can't do a chest bump now. As the divorced Hunter, Ike Barinholtz (2017’s “Snatched”) is the inevitable wild card, who may be an absentee parent but initially isn’t as up in arms about their daughters’ sex pact; his delivery can be exhausting but sly.

Kathryn Newton (HBO’s “Big Little Lies”) and relative newcomers Geraldine Viswanathan and Gideon Adlon (Pamela Adlon’s daughter) are all likable and distinctly drawn as Julie, Kayla and Sam, who seem to talk to each other like real teenage girls do and have a terrific chemistry together. Viswanathan is the clear standout as the saucy Kayla, who’s down to do the deed, too, with her date, drug-cooking, manbun-rocking lab partner Connor (Miles Robbins). She assures herself as someone who always commands a room and can score a laugh as bawdy as the guys, like a quote-worthy moment about equating penises to plungers. Then there’s Adlon, who has a warm and endearing quality about her as Sam, who says she’ll lose her V-card to her good-natured, fedora-wearing date, Chad (Jimmy Bellinger), but she really has her eyes set on the magical, out-and-proud Angelica (Ramona Young). Sam gets the most sizable and sensitively handled arc of the teenage trio as she comes to terms with her sexuality.

If not a serious guide on how to give your teenage daughter wings to fly, “Blockers” does shed more insight than expected. When the parental trio reconnoiters at Mitchell’s house, his wife Marcie (Sarayu Blue) brings up great points about double standards—would they care as much if they all had sons wanting to lose their virginity?—and respecting their daughters’ time to explore their sexuality rather than seeing it as a loss of innocence or treating them as damsels in distress. There was most likely a lot of ad-libbing on the set, but there’s never a time where the film noticeably meanders or overstays its welcome to the point of a scene needing to wrap it up, like almost all of the comedies from Leslie Mann’s husband. Where the consistently funny “Blockers” ends marks the end of an era for not only the teens but also the parents, er, cock blockers.